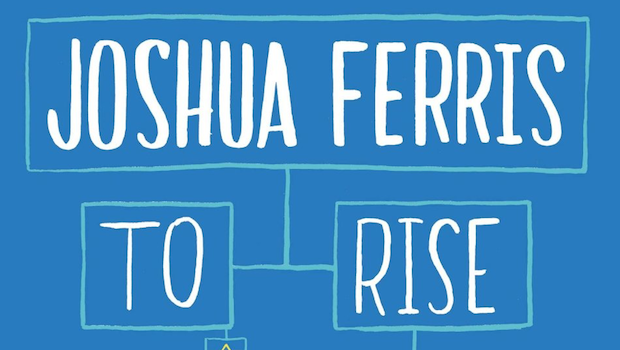 To Rise Again at a Decent Hour by Joshua Ferris

Blurb: Paul O’Rourke, 40 year-old slightly curmudgeonly dentist, runs a thriving practice in New York. Yet he is discovering he needs more in his life than a steady income and the perfect mochaccino. But what? As Paul tries to work out the meaning of life, a Facebook page and Twitter account appear in his name. What’s at first an outrageous violation of privacy soon becomes something more frightening: the possibility that the online “Paul” might be a better version of the man in the flesh. Who is doing this and will it cost Paul his sanity? (Viking, May 2014)

“If you’re afraid of dentists or demanding fiction, back away because To Rise Again at a Decent Hour is a brilliant mess of a novel that drills at a raw nerve of existential dread. It’s a deceptively comic treatment of Emily Dickinson’s claim that “Narcotics cannot still the Tooth/ That nibbles at the soul.” Ferris has managed to blend the clever satire of his first book, Then We Came to the End, with the grinding despair of his second, The Unnamed. The result is a witty story that chews on Internet scams, relationship killers, crackpot theology, baseball mania and the desperate loneliness of modern life.”

“To Rise Again at a Decent Hour, with its title pitched between a Lazarus-like moment of transformation and the more mundane awakening to an alarm clock, gets the balance between light and dark, realism and allegory, just right. It’s a book that is ‘faithful in the small things’- to the miracle of life, but also of mouthwash – and this applies even to the naming of characters. His ex-girlfriend’s surname is ‘Plotz’, a word of Yiddish origin meaning to collapse or be beside oneself with frustration, and also a reminder that we’re reading a story.”

“This is tough stuff, but Paul is a winning enough narrator to make it a delight. Given to abrupt changes of register – thunderbox, kaplow – and wild, unselfconscious digressions, he hurries us through an ever stranger and more complicated novel by antic force of will; he is funny, and while his field of vision might be narrow, he is exceptionally good at hauling interesting things into it.”

“To Rise Again at a Decent Hour at times struggles to bear the weight of its conceit (digressions into the history of the Amalekites confound after a while), but at its best it is enormously impressive: profoundly and humanely engaged with the mysteries of belief and disbelief, linguistically agile and wrongfooting, and dismayingly funny in the way that only really serious books can be.”

“The plot is ramshackle and (you suspect) incompletely thought through. Yet the comic exuberance of the writing and the compelling awfulness of Paul’s neuroses just about bring you through. Here is something that – more often than not successfully – marries a serious inquiry into the condition of a human soul with the wan recognition that, as well as having souls, we step on banana skins.”

“To Rise Again at a Decent Hour is an “almost boringly paced accumulation of what seems slight or incidental”; in the middle I did feel threatened it would never end; there is a “drowsy metamorphosis” in Paul O’Rourke. If I never found the novel an “opera of bracing suspense,” it may be because I was so worn down by O’Rourke’s incessant circling around his self-hatred and fear and inability to make a substantive effort, that when change does in fact come to him, it feels a bit limp and clammy.”

“For Paul — and, by extension, Ferris — weird is where we live now, in a world so divorced from its own essence that it might as well be virtual. In his infatuation with the Ulm, then, Paul finds a way back to himself. Such a move is not always handled smoothly: Much of the last third of the novel involves an enmity between the Ulm and Judaism that Ferris neither completely explains nor justifies. In part, this has to do with the distinction between belief and ritual, but if Ferris means to make a larger point about community, he doesn’t fully pull it off.”

“At his best, Ferris convinces us that O’Rourke is a personification of contemporary man’s feeling of displacement – from spirituality, love, material reality, the past and other humans. At his worst, O’Rourke bores like one of his dentist’s drills. His knowingly percussive narrative style is two parts blog rant, one part Google search engine with a twist of Tourette’s.”

“Some of Paul’s Woody Allenish existential whinings are funnier than others. He marvels at people’s obscene, futile use of hand lotion when they are destined to die “liver spotted, bony, thin skinned”; yet if he himself “could just become a lotioner” it might rid him of “all that exile, all that alienation”. Other such musings cover puppies, celebrity gossip, the mall — it is tiring to spend so much time in Paul’s head. Where Then We Came to the End expertly extended everyday absurdity, here the proportions of the bizarre and banal are less reliably mixed.”