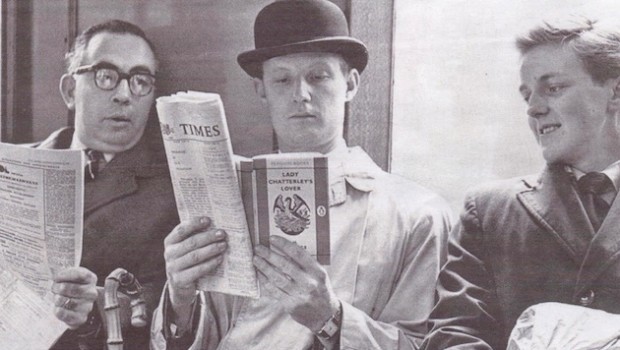 Blurb: David Kynaston’s history of post-war Britain has so far taken us from the radically reforming Labour governments of the late 1940s in Austerity Britain, through the growing prosperity ofFamily Britain‘s more placid 1950s, to the very cusp of the 1960s and the coming of a new Zeitgeist in Modernity Britain. The first part, Opening the Box, 1957-59, plotted the main themes of the new spirit of the age. Now, in part two - A Shake of the Dice, 1959-62 - through a rich haul of diaries, letters, newspapers and many other sources, Kynaston gets up close to a turbulent era as the speed of social change accelerated. By 1959 consumerism was inexorably taking hold (stripes for Signal toothpaste, flavours for potato crisps), relative economic decline was becoming the staple of political discourse (entry into Europe increasingly seen as our salvation), immigration was turning into an ever-hotter issue (the controversial coming of controls), traditional norms of morality were perceived as under serious threat (Lady Chatterley’s Lover freely on sale after the famous case), and traditional working-class culture was changing (wakes weeks in decline, the end of the maximum wage for footballers) even as Coronation Street established itself as a national institution. The greatest shake of the dice, though, concerned urban redevelopment: city centres were being yanked into the age of the motor car, slum clearance was intensified, and the skyline became studded with brutalist high-rise boxes. Some of this transformation was necessary, but too much would destroy communities and leave a harsh, fateful legacy.

Modernity Britain: Book One: Opening the Box, 1957-59 by David Kynaston

“Indefatigable, judicious, with a magpie’s eye for detail and a lovely grasp of tone and balance, David Kynaston is one of the great chroniclers of our modern story. His new book, the fifth in his mighty series on Britain since 1945, begins in the aftermath of Harold Macmillan’s election victory in October 1959, and ends just before his infamous cabinet purge, nicknamed the night of the long knives, in July 1962. As always, Kynaston’s focus is not on high politics but social texture. Occasionally the detail, piled dizzyingly high, can be overwhelming, yet since every paragraph contains some glittering nugget, it would be absurd to complain. This is history not as grand narrative, but as total immersion.”

“The Chatterley trial is one of several episodes that Kynaston covers at length, allowing stories to emerge in more detail than in the first volume of Modernity Britain where the pace was sometimes too breathless to be engaging. It makes this volume an exciting read, containing moments of suspense and lengthy sections of analysis. There are intelligent, well synthesised accounts of the nationalisation debates, slum clearance, the emergence of the new left and its fraught relationship with the Labour party, and the changing position of women. The society that emerges is one that comes worryingly to mirror our own, both in its so-called modernity and its reactionary insularity.”

“Kynaston is a modest presence in his story. Such editorialising as he does appears in the work of selection and arrangement. Jokes are very deadpan, but they are there when you tune in. A semi-running gag, early on, concerns Richard Dimbleby’s pomposity. He quotes ‘top model Sandra Paul’ endorsing Lux soap in the pages of Woman (‘one marriage, one lifetime, she says’) — the parenthesis perhaps a wry smile at the present Lady Howard’s four marriages. He acknowledges the ‘now statutory presence of Richard Hoggart’ on a Third Programme debate in 1961. But mostly he just lets his material — lets his myriad speakers, in fact — speak for themselves. And how much they have to tell us!”

“In an immensely detailed, beautifully textured chapter on the persistence of class divisions in the period, Kynaston accumulates a wealth of evidence to show that, in spite of increased wages and improved purchasing power among the better-paid section of the working class, the consumer comforts they had begun to enjoy were still at the expense of far longer working hours, in far worse conditions, than their middle-class counterparts.”

“He is no ordinary historian. Some historians are wise, others are funny; he is both. He is also a lot of other things that rarely go together: artful and clear, playful and serious, self-effacing and omnipresent, at the service of his material but also in command of it. He is ravenously curious about everyone and everything, high and low. He can write about the opening of Bernard Manning’s Embassy Club in Manchester (‘with his mother on the till and the 29-year-old Manning singing High Hopes’) and about F R Leavis’s attack on C P Snow with equal authority. Furthermore, he must surely be the most diligent beaver in the world. One moment he is quoting from the autobiography of Lulu, the next from The Architectural Review or the diaries of Harold Macmillan, but not for one second does his writing sag under the weight of his research: if you asked him to plod, he simply wouldn’t know how.”

Modernity Britain: Book Two: A Shake of the Dice, 1959-62 The Omnivore