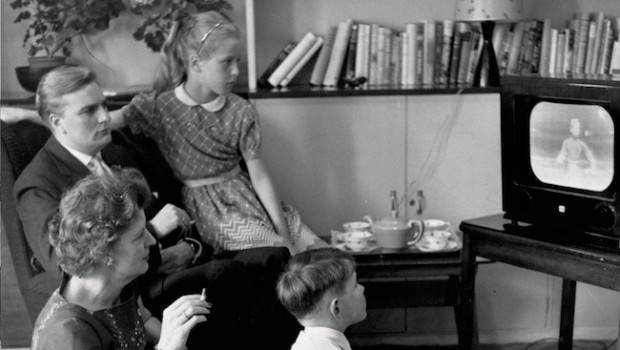 Blurb: The late 1950s was an action-packed, often dramatic time in which the contours of modern Britain began to take shape. These were the ‘never had it so good’ years, when the Carry On film series and the TV soap Emergency Ward 10 got going, and films like Room at the Top and plays like A Taste of Honey brought the working class to the centre of the national frame; when the urban skyline began irresistibly to go high-rise; when CND galvanised the progressive middle class; when ‘youth’ emerged as a cultural force; when the Notting Hill riots made race and immigration an inescapable reality; and when ‘meritocracy’ became the buzz word of the day. The consequences of this ‘modernity’ zeitgeist, David Kynaston argues, still affect us today. (Bloomsbury)

“David Kynaston resembles a novelist impersonating a historian. His books read like fiction disguised as documentary … shrewd, funny and ever-readable … The subtle, unsentimental and never condescending discussions of class are a highpoint of this book.”

“Kynaston is a historian who likes to get out of the way. You seldom read a decisive judgment or a grand-sweep generalisation. Rather, he rummages in the attic and pulls a whole clattering cavalcade of interesting junk down on himself: details in more or less chronological order, retailed in a telegraphic style … Sometimes — as you zing from Doris Bonkers’s seaside holiday to a Sunday League football result and thence to a discussion of economic policy via an itemisation of what was on telly that weekend — you find yourself wanting him to pull focus a bit. But here — which is the point — is the texture of life as it was lived.”

“…you start to realise that his writing is not as apolitical as it appears: that underpinning the whole procedure is a profound scepticism of authority—the authority, that is, of those in any kind of power, which by implication includes historians themselves. Kynaston mistrusts “opinion-formers” and that mistrust extends to writers who seek to form their readers’ opinions. All his instincts, in other words, incline towards the freedom of ordinary people to have their own voice and their own way of life. Both his politics and his philosophy of history are radically democratic.”

“Modernity Britain is both even-handed and exhilarating, a rare combination … Was ever a history book so authoritative and, at the same time, quite so entertaining?”

“Kynaston’s many fans will be pleased to hear that Modernity Britain has all the virtues of his previous volumes. There is no real narrative and there are no central characters; instead, he weaves a dazzling array of sources into an apparently seamless tapestry, plunging the reader head first into everyday life in the late 1950s … Above all, Kynaston is a historian of tremendous compassion … [A] splendid book”

“Modernity Britain is an outstanding book, a delightful and often funny mix of the profound and the mundane that presents an enormously instructive glimpse into a time when supermarkets, Carry On films and Galaxy bars were cutting edge. Comparisons will inevitably be made with Dominic Sandbrook’s cumbersome volumes on post-war Britain, yet Sandbrook is a mere assembler of facts while Kynaston possesses unique sensitivity to their meaning. While this is technically a book about the three years before Britain turned fabulous in the Sixties, it is, more importantly, a primer for the political battles of the Wilson, Thatcher and Blair years.”

“These books are so admirable and interesting that I want to spend most of this article explaining why. But let me just get my few criticisms out of the way first. The book contains too little about rural life, too little about the upper classes, and, although others will disagree, too much about football … The greater problem is that often people are not explained … But Kynaston is brilliant and funny in his selection of material, and almost always, through the mass of little things, knows how to lead the reader to the big ones.”

“This is social, cultural and political history, more or less in that order, with a smile on its face … Mostly he launches bombardments of facts, quotes, stories and numbers interspersed with pithy and shrewd editorial observations. He more than gets away with it – but I could have done with an overture about the impact on national morale of the Suez catastrophe the previous year, and there were times when I was beseeching him to change tack and digest all his rich ingredients on a theme into a coherent and conclusive whole.”

“He is seen at his best in deftly building up his mosaics with a sense of pattern that often emerges by stealth from a chaos of fragments, with an enviable knack for catching the attention of a wide readership.”

“The narrative is beautifully composed and Kynaston digs deeper than previous historians, but he is excavating the same sites … Kynaston castigates Richard Hoggart and Michael Young, the gurus of the liberal Left, for sentimentalising the ‘traditional’ working class and failing to understand the legitimate aspirations of workers in a consumer society. Their ideas, he maintains, were disastrous for Labour in the long run. This seems to me a cavalier judgement, unfair to both Hoggart and Young.”

Modernity Britain: Opening the Box, 1957-59 by David Kynaston The Omnivore