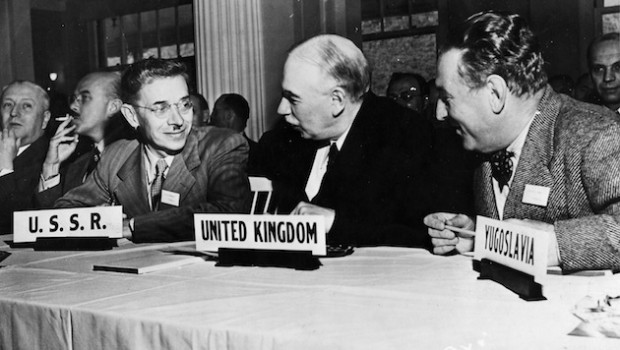 The Summit by Ed Conway

Blurb: The idea of world leaders gathering in the midst of economic crisis has become all-too familiar. But the summit at Bretton Woods in 1944 was the only time countries from around the world have agreed to overhaul the structure of the international monetary system. And, what’s more, they were successful – it was the closest to perfection the world’s economy has ever been, and arguably the demise of the Bretton Woods system is behind our present woes. This was no dry economic conference. The delegates spent half the time at each other’s throats, and the other half drinking in the hotel bar. The Russians nearly capsized the entire project. The French threatened to walk out, repeatedly. John Maynard Keynes had a heart attack. His American counterpart was a KGB spy. But this summit could be instrumental in preventing World War Three.

“This is a ripe, resounding story, brilliantly told: but it is also much more than just a story… Ed Conway makes those distant achievements fresh again with scholarship and verve. This is living history: and a seam worth mining further. Next, perhaps, he might try the birth of the euro, with smelling salts as well as cognac unlimited?”

“…what makes Conway’s account distinctive is that it is such good fun. For the most part he steers clear of economic theology, gleefully embracing what he calls the “noises off”. I expect some economists will dismiss his book as mere journalistic gossip. But for lay readers, his jolly, colourful account makes a perfect introduction to one of the most important meetings of the past century.”

“Gripping… while his compelling account of the process that created the dollar peg reveals many flaws – both personal and intellectual – in the thinking of those in the room, it also serves as a homage to their ambition.”

“Although Ed Conway puts personalities and aggression at the forefront of his Bretton Woods story, he has done good work in archives on both sides of the Atlantic, and is a sure guide to the economic consequences of the conference. But the background details get smudged and the factual accuracy deteriorates as he hurries his narrative onwards in a blur of catchy phrases… Conway is economics editor of Sky News, and a stalwart of Rupert Murdoch’s party lines. The Summit has too many anti-European jibes… Conway’s deference to media moguls is blatant”

The Summit by Ed Conway The Omnivore