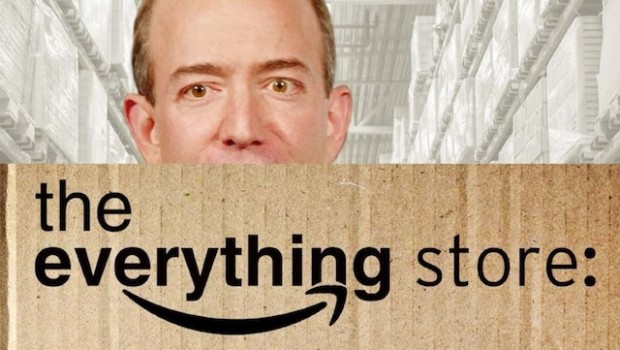 The Everything Store: Jeff Bezos and the Age of Amazon by Brad Stone

Blurb: Amazon.com started off delivering books through the mail. But its visionary founder, Jeff Bezos, wasn’t content with being a bookseller. He wanted Amazon to become the everything store, offering limitless selection and seductive convenience at disruptively low prices. To achieve that end, he developed a corporate culture of relentless ambition and secrecy that’s never been cracked. Until now…

Brad Stone enjoyed unprecedented access to current and former Amazon employees and Bezos family members, giving readers the first in-depth, fly-on-the-wall account of life at Amazon. Compared to tech’s other elite innovators – Jobs, Gates, Zuckerberg – Bezos is a private man. But he stands out for his restless pursuit of new markets, leading Amazon into risky new ventures like the Kindle and cloud computing, and transforming retail in the same way Henry Ford revolutionized manufacturing.

THE EVERYTHING STORE is the revealing, definitive biography of the company that placed one of the first and largest bets on the Internet and forever changed the way we shop and read.

“Brad Stone, a technology journalist who first covered Amazon in 2000, has done a remarkable job in The Everything Store, in a way that Bezos would appreciate – by working very hard. He has talked to many of those who knew and worked with Bezos from the early days, and even tracked down his biological father … As with other entrepreneurs, it is a bit of a mystery where this talent and focus sprang from. Discussing Bezos’s separation from his father, Stone notes that both Steve Jobs of Apple and Larry Ellison of Oracle, two other technology founders, were adopted and “the experience is thought by some to have given each a powerful motivation to succeed”. He moves swiftly on, perhaps fearing a narrative fallacy.”

“Mr. Stone, a senior writer for Bloomberg Businessweek and a former reporter for The New York Times, tells this story of disruptive innovation with authority and verve, and lots of well-informed reporting … The Everything Store does not examine in detail the fallout that Amazon’s rise has had on book publishing and on independent bookstores, but Mr. Stone does a nimble job of situating the company’s evolution within the wider retail landscape and within the technological revolution that was remaking the world at the turn of the millennium. He gives the lay reader an understanding of how Amazon was able to outmaneuver the already established book chain Barnes & Noble, and how it’s been able to grow and mutate and take on Internet giants like eBay and Apple. Mr. Stone also provides a dynamic portrait of the driven and demanding Mr. Bezos…”

“Stone obviously admires his subject, but it’s hard to tell if he likes him. For that matter, it’s hard to tell if anybody likes him … It comes across loud and clear just how painful working anywhere near Bezos seems to have been over the years, despite halfhearted attempts by employees to recast a total lack of empathy as some sort of trick of leadership: one of his “gifts,” they say, is “to drive and motivate his employees without getting overly attached to them personally.” Is that a gift?”

“[A] thorough profile of Bezos the man and Amazon his company that, for good or ill, has come to dominate the retail world.“

“Meticulously reported … The book’s weakness is that its central character and omnipresent force — “in a way, the entire company is scaffolding built around his brain,” Stone writes of Bezos — is strangely absent. Because he didn’t sit down for interviews, his current thinking about his own and his company’s past is missing. As a reader, you long to know how Bezos rationalizes, or doesn’t, some of the contradictions in himself and his creation.”

The Everything Store: Jeff Bezos and the Age of Amazon by Brad Stone The Omnivore