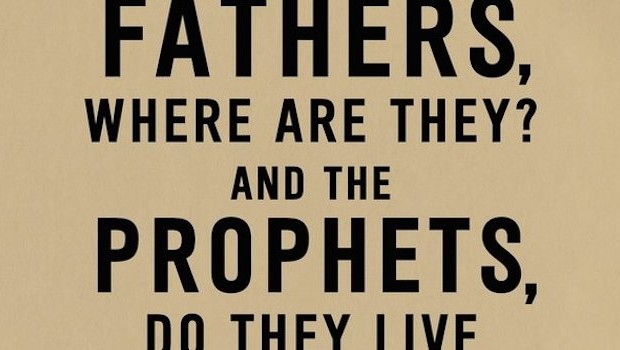 Your Fathers, Where are They? by Dave Eggers

Blurb: In a barracks on an abandoned military base, miles from the nearest road, Thomas watches as the man he has brought wakes up. Kev, a NASA astronaut, doesn’t recognize his captor, though Thomas remembers him. Kev cries for help. He pulls at the chain. But the ocean is close by, and nobody can hear him over the waves and wind. Thomas apologizes. He didn’t want to have to resort to this. But they really needed to have a conversation, and Kev didn’t answer his messages. And now, if Kev can just stop yelling, Thomas has a few questions. (Hamish Hamilton, July 2014)

“Your Fathers … is alert, quick-witted and dogma-averse, and its author works hard to surprise, challenge and confound. The expanding cast of supporting characters (a paedophile, a policeman who shot an unarmed suspect, a drug-addicted mother) are resistant to assumption and cliché, as sympathy and gravitas emerge in the most unlikely quarters. The result is a book whose themes resonate far beyond its short length. This is a writer on the best kind of roll.”

“There is a prejudice that dialogue fiction is either a gimmick or an unfilmed screenplay cannily repackaged. Eggers, though, has a precise reason for employing only voices. As the doubly interrogative title tips us off, Your Fathers … is a story about questions, with Thomas, who uses the legal term “depositions” for his interrogations, asking his hostages to explain what he views as anomalies in American life, including the cessation of the space programme, Congressional consent for recent wars, and failures in the professional conduct of teachers and police officers. It is typical of Eggers’s intelligence that the answers are often less easy and more unsettling than the hostage-taker expects.”

“The novel thrives on ambiguity. “Everything you did brought me to this place,” Thomas berates his mother, which seems unfair, until we learn how her addictions shaped his childhood. Under interrogation, Thomas’s former teacher admits feeling attracted to children but denies acting on his fantasies, calling his relationship with Thomas’s dead friend Don “unacceptably complex”. The teacher isn’t trustworthy but he makes us think about paedophilia with more nuance than is usually permitted.”

“If I have a misgiving, it is that there’s a streak of wilful naivety in Eggers’s work that is often attractive and, yes, heartfelt but that can occasionally shade into facetiousness. Certainly, this novel feels at its weakest in the gestural generalities of the sections about Nasa and war veterans, where Thomas is somewhat glibly questioning an astronaut and a congressman about government budgets and the end of the shuttle programme. Conversely, the book feels at its strongest in the interrogations with an ex-teacher and Thomas’s mother. Here, the specificity, nuance and exactitude of the exchanges is engaging and surprising, and the writing loses its sense of having been staged for the purposes of idea transmission.”

“As an oral historian Eggers has enviable skill in catching “voice”. This is a novel which, with the right mental tuning, one “hears” rather than reads. And does Thomas get the answers he seeks? No. There is a plot of kind, although the final fate of the pathetic Grand Inquisitor is left dangling. There’s a lot of dangle in this novel. Does Eggers’s experiment in wholly voiced narrative work? It’s unsettling — which could be precisely the effect he’s aiming at. And the very big question the author poses — is America heading for the rocks or already on them — lingers in the mind. Let’s say it’s a very interesting novel. But when has our Dave done anything uninteresting?”

“There are echoes here of the sadness and incomprehension at the implosion of the American dream that underpinned the story of Alan Clay, the failed middle-aged businessmen of Eggers’s 2012 novel, A Hologram for the King. Yet while that book involves a sharp critique of US economic decline, here Thomas’s rage is largely incoherent.”

“The book’s strongest section is Thomas’s showdown with one of his old teachers, a genuinely creepy figure. Here his hypersensitivity to the nuances of other people’s speech becomes interestingly forensic. There are moments of dark musicality, and Eggers’s concern with the abuse of power is resonant. But the novel is hollowed out by its main character’s mixture of apocalyptic gloom and repetitive pedantry.”

“Eggers is attempting, in just 224 generously spaced pages, to address the state of the nation. The problem isn’t that these questions don’t belong in a novel but that inYour Fathers there is nothing outside of the questions. We are left with a limp, thematic skeleton, picked clean by the piranha of sincerity.”

“You have to go back to Steinbeck and Vonnegut to find a popular American novelist so willing to deploy his talents to such deliberately political ends. And as with those two authors, Eggers’s success rate is erratic. His 2012 novel, A Hologram for the King, about a middle-aged man trying to reboot his career in Saudi Arabia, was a careful and affecting lament for America’s economic decline. The Circle, though, was a tedious lecture on corporate tech firms’ erosion of our privacy. Your Fathers falls roughly in between. Eggers is still tinkering with a moral fiction that’s as flexible and subtle as any other kind, and at its worst it sounds like it’s being said by an angry op-ed columnist on a bender. Yet the dialogue-only structure and depth of feeling in Your Fathers are to its credit.”

“Eggers is ultimately less interested in the exploration of ideas than he is in their delivery. With the exception of a tense exchange between Thomas and a former teacher who he believes sexually abused him, most of the conversations are incredibly one-sided. A police officer’s rebuttal to a rant about the police is nothing more than the interjection of the word “No” at five separate points. Even if you agree with Eggers’s argument, this quickly gets tedious. It’s not a conversation so much as a kind of rhetorical shadowboxing.”

“Dave Eggers’s short new novel has a long, awkward title: Your Fathers, Where Are They? And the Prophets, Do They Live Forever? And it turns out to be a labored, predictable and tiresome piece of fiction lacking the emotional wisdom and dazzling prose that have distinguished so much of this author’s earlier work.”

Your Fathers, Where are They? by Dave Eggers The Omnivore