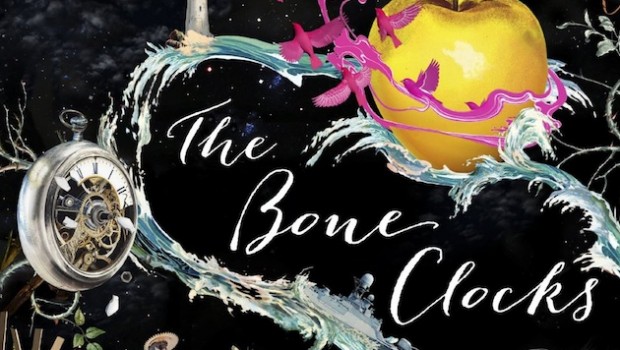 The Bone Clocks by David Mitchell

Blurb: One drowsy summer’s day in 1984, teenage runaway Holly Sykes encounters a strange woman who offers a small kindness in exchange for ‘asylum’. Decades will pass before Holly understands exactly what sort of asylum the woman was seeking . . . The Bone Clocks follows the twists and turns of Holly’s life from a scarred adolescence in Gravesend to old age on Ireland’s Atlantic coast as Europe’s oil supply dries up – a life not so far out of the ordinary, yet punctuated by flashes of precognition, visits from people who emerge from thin air and brief lapses in the laws of reality. For Holly Sykes – daughter, sister, mother, guardian – is also an unwitting player in a murderous feud played out in the shadows and margins of our world, and may prove to be its decisive weapon. Metaphysical thriller, meditation on mortality and chronicle of our self-devouring times, this kaleidoscopic novel crackles with the invention and wit that have made David Mitchell one of the most celebrated writers of his generation. Here is fiction at its most spellbinding and memorable best.

“This all must sound ridiculous, exhausting, cheaply exciting and dangerously lowbrow and yes, by every measure it is, save one: David Mitchell has written it. With The Bone Clocks he has brought off his most sinewy, fine and full book to date, a Möbius strip-tripping great novel that will reward bleary-eyed rereading until he writes his next one.”

“In the wrong hands, magical storytelling like this would make you cringe. But in Mitchell’s it thrills. He is funny, hip and full of life. Which other writer could match his witty elision of fiction and science, of sense and nonsense? This beautiful explosion of adventurous ideas may well take him, finally, beyond the Booker shortlist.”

“This novel electrifyingly unites Mitchell’s fictions into one universe while telling the story of Holly Sykes, an ordinary young woman whose chance encounters give her life meaning. She is a hinge in this story, and in the arc of Mitchell’s work, which has taken a fantastic turn.”

“For all the stuff and nonsense about escaping mortality by switching bodies and devouring souls, death is at the heart of this novel. And there lies its depth and darkness, bravely concealed with all the wit and sleight of hand and ventriloquistic verbiage and tale-telling bravura of which Mitchell is a master. Whatever prizes it wins or doesn’t, The Bone Clocks will be a great success, and it deserves to be, because a great many people will enjoy reading it very much.”

“There are many reasons why a novel like The Bone Clocks shouldn’t work. Yet what’s surprising – and a testament to Mitchell’s singular abilities – is that for the most part it does. It helps that Mitchell keeps a tight lid on the fantasy element while the more realist sections are under way; the activities of the atemporals are glimpsed only in fragments, which pique the reader’s curiosity but don’t distract from the main story. Because the two elements don’t bleed too much into each other, The Bone Clocks doesn’t end up feeling like a clumsy halfway house.”

“The Bone Clocks is an epic read. Mitchell has a vigorous, shape-shifting imagination, and his pen tracks his thoughts with extraordinary agility. Moving from place to place, time to time, he can summon up a setting in a line … It’s all dazzling, but sometimes what’s needed is a softer, more long-lasting glow. The near-surfeit of invention creates a weightless feel and, at points, a credibility problem: even Holly can’t believe what’s happening half the time.”

“If only real life were as elegant and generally encouraging as a Mitchell novel! He writes with scintillating verve and abundance. The joyful, consoling world of Mitchell is the world of childhood, where the parameters between reality and fantasy are fluid; the overall effect is like literary regression therapy for adults who have been whipped and abused by real life. The reader is kind to Mitchell, I suspect, because he is so painstakingly kind to the reader.”

“Not many novelists could take on plausible Aboriginal speech, imagine a world after climate change has ravaged it and wonder whether whales suffer from unrequited love. One thinks of Holly quoting a wise elder: “Life’s a matter of Who Dares Wins.” Other writers may be more moving, and some may push deeper, but very few excite the reader about both the visceral world and the visionary one as Mitchell does.”

“It is a rich and dense, inventive and witty thriller which, if you enjoyed Cloud Atlas and Mitchell’s other works will leave you completely spellbound.”

“Mitchell’s work is obsessed with coincidence and with producing a perspective that is never available to a mortal, stitched into time, but only to the roving, lofty eye of a novelist or God. The pleasure for the reader lies in the comforting sense that there might after all be a pattern to the random data of the everyday. The risk, however, is of feeling manipulated, the novel’s formal slickness and dexterity undermining effect even as it strives to generate it.”

“For sci-fi fantasists, the imaginary world Mitchell creates might be a thing of wonder, a Dungeons and Dragons for literate grown-ups. For others, I suspect the flesh and blood anguish of a long life lived well against the odds will prove the greater pleasure.”

“The book’s exuberant impossibilities and its restlessly proliferating realities have a way of refocussing one’s suspicions of his earlier work: Mitchell has plenty to tell, but does he have much to say?”

“We climb this steep mountain expecting that we will be rewarded with the wizardry of The Night Circus, The Magicians or Jonathan Strange & Mr. Norrell — but somehow, as The Bone Clocks winds up for its long-anticipated climax, Mitchell abandons his exploration of character, sexuality, class and politics for an old warlock’s sack of cliches. In the words of one of the book’s courageous, jargon-laden soldiers, the “psychovoltage is low.””

“In his new novel, The Bone Clocks, his heroine, Holly Sykes attests to this highly cerebral author’s ability to create a thoroughly captivating character. Holly’s poignant charm and Mr. Mitchell’s sheer fluency as a writer help the reader speed through this 600-plus-page novel with pleasure. But the plot — which seems to borrow from such disparate sources as Minority Report, The Da Vinci Code, Men in Black and Shirley MacLaine’s writings about reincarnation — proves a creaky, jerry-built vehicle that devolves into lots of silly mumbo-jumbo.”

“There is a sixth section, in which the proper, grown-up themes of some of the earlier sections are picked up again. But it’s far too late. The whole thing has been irredeemably trivialised. Then again, I’m not a fan of Game of Thrones or Doctor Who; perhaps readers with more tolerance for that sort of thing will be delighted by The Bone Clocks. But my guess is they’ll be as bored by the descriptions of Iraq in 2004 or the Hay Festival in 2015 as I was by the war between the Horologists and the Anchorites in 2025. ”

“The worst thing here by far, though, is the jaw-droppingly undercooked fantasy world with which Mitchell tries to glue together his narrative. The Atemporals, it turns out, are locked in a cosmic conflict with a sect of dastardly spirits called the Anchorites of the Dusk Chapel of the Blind Cathar. That’s not even their full title. If you think that sounds daft, Mitchell has barely got the motor running. ‘ “Give me a minute,” murmurs D’Arnoq, “I need to revoke my Act of Immunity, so we can merge our psychovoltage.” ’”

The Bone Clocks by David Mitchell The Omnivore