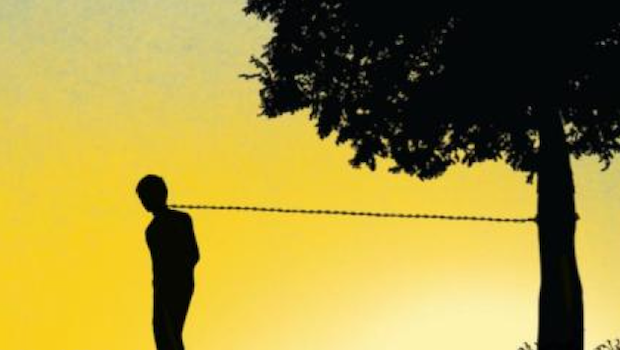 Blurb: From the undisputed master of the short story, George Saunders, comes a dazzling and disturbing new collection. His most wryly hilarious work to date, Tenth of December illuminates human experience and explores figures lost in a labyrinth of troubling preoccupations. A family member recollects a backyard pole dressed for all occasions; Divisional Director Todd Birnie sends round a memo to employees he thinks need some inspiration; Jeff faces horrifying ultimatums and the prospect of Darkenfloxx™ in some unusual drug trials; and in an auction of local celebrities Al Roosten hides his own internal monologue behind a winning smile that he hopes will make him popular. Although, as a young boy discovers, sometimes the voices fade and all you are left with is a frozen hill on a cold day in December… (Bloomsbury Publishing, 2013)

“His new collection, Tenth of December, is funny, poignant – in flashes, deeply moving – light as a feather, and consistently weird in the way that the suburbs are weird, which is to say quietly but intensely, under a surface as clean and bright as a newly waxed car … If the authority in some of these stories is often profoundly personal, it is also clearly the authority of the workplace, of social discipline more generally. In these stories, people are often cowed or bullied. They are required to carry out their assigned tasks, even at the cost of pain or personal suffering.”

“In Tenth of December, his latest collection, Saunders has achieved something remarkable: he’s got better. Much better. The familiar notes are still there, but while the earlier work might have been considered by some to be occasionally cacophonous, Saunders has found a way of creating some space in the music: dialling back on the satire, relaxing into realism, letting the clear voice of suffering sing through.”

“As this is only Saunders’s second book of fiction in 12 years (his hilarious non-fiction collection, The Braindead Megaphone, was published in 2007), I’d like to have seen him deliver a longer collection, with a few more miniature excursions in the manner of his story “Sticks” – almost certainly the most affecting two pages ever written about a metal pole. This is a minor complaint, though. Saunders has Kurt Vonnegut’s gift of combining unique, high-flown ideas with a strong empathy. Even better, he does not have the sci-fi self-consciousness of Vonnegut.”

“The masterpiece here is “The Semplica Girl Diaries”, in which a harassed man logs his efforts to do the best for his adored family in the face of mounting debt, unscrupulous big business, and a materialist society. His youngest daughter is the only family member to understand the horrific fate that their society thrusts on its most vulnerable members. The story took Saunders 12 years to write. It would have been worth it if it had taken 20. This is a brilliant, trenchant and hilarious collection.”

“Regarding the stunning title story in this volume, which itself makes this book worth reading, it’s a deeply affecting tale about the collision of two lives: a fat, pale boy with “unfortunate Prince Valiant bangs” who dreams of being a hero; and a middle-aged cancer patient who is thinking about killing himself because he fears becoming an invalid and burden to his family and friends. It’s a measure of Mr. Saunders’s talents as a writer — his brassy language, his narrative instincts, his bone-deep understanding of his characters — that he takes what might have been a contrived and sentimental parable and turns it into a visceral and moving act of storytelling.”

“Tenth of December is very dark indeed, particularly in its consideration of class and power. It’s been seven years since Saunders’s last collection, “In Persuasion Nation,” and in the interim America has settled into a state of uncertain financial gloom that seeps into these stories like smoke beneath a door. Money worries have always figured in Saunders’s work, but in Tenth of December they cast longer shadows; they have deepened into a pervasive, somber mood that weights the book with a new and welcome gravity … Yet despite the dirty surrealism and cleareyed despair, “Tenth of December” never succumbs to depression. That’s partly because of Saunders’s relentless humour …”

“The collection’s most remarkable story is Escape from Spiderhead, set in a laboratory where violent criminals are given trial drugs such as ErthAdmire, which causes the recipient to revel in the ­wonders of nature … Once again, ­Saunders skilfully moves beyond pure satire by having Jeff flee the facility in an attempt preserve his humanity. In this quest, he is joined by nearly all the ­central characters in Tenth of December. Trapped in a menacing, “subtenable” world where they are dosed with psychotropic drugs, burdened by crushing debt, and subject to sudden violence, they are able to make their escape by using something as mundane as simple ­compassion.|

“Saunders’ previous collection, The Brief And Frightening Reign Of Phil, was a slight disappointment. Too often the conceits evaporated into whimsy, and the political dimension was too strident and obvious. It is therefore a pleasure to be able to say that Tenth Of December is a far stronger, and far more satisfying book.”

“For all the successful stories, some of Tenth of December feels like it could have been lifted straight out of Saunders’s previous collections. Set in a medieval-themed amusement park, “My Chivalric Fiasco” is a little too close to the caveman- and civil war-themed amusement parks seen in his earlier work. The fake product names in “Escape from Spiderhead” (MobiPak™, ViviStif™, Darkenfloxx™) recall his other product names (I Can Speak™, Aurabon® etc). And for a writer with such a great ear, it’s a pity Saunders so often returns to characters with the same voice – the naive, slightly childish, slightly too literal guy who says things such as, “I knew Don Murray was her boss because Don Murray was also my boss” or “I could not help but wonder what tomorrow would bring”.”

“The most striking piece in his new book, Tenth of December (Bloomsbury 272pp £14.99), is a darkly playful science-fiction story, ‘Escape from Spiderhead’. It is set in a world, not far from our own, in which experimental drugs are tested on prisoners. The most potent of the medicaments simulate love, with ‘transcendently stupefying results’, while the worst of them summon the most terrible feelings of despair. Other entries are more traditional and the collection is enjoyably diverse”

“Richly imagined dystopias, preposterous theme parks and sinister corporations were the stuff of Saunders’s first three collections. A lot of the pleasure was delivered in the form of exposition: elaborate descriptions of the workings of made-up institutions. The new stories give the impression of imagined worlds pared back until they’re not too different from our own, just a little uncanny. ”