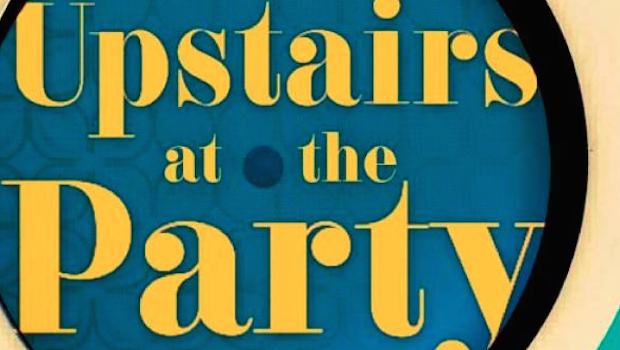 Upstairs at the Party by Linda Grant

Blurb: In the early Seventies a glamorous and androgynous couple known collectively as Evie/Stevie appear out of nowhere on the isolated concrete campus of a new university. To a group of teenagers experimenting with radical ideas they seem blown back from the future, unsettling everything and uncovering covert desires. But the varnished patina of youth and flamboyant self-expression hides deep anxieties and hidden histories. For Adele, with the most to conceal, Evie/Stevie become a lifelong obsession, as she examines what happened on the night of her own twentieth birthday and her friends’ complicity in their fate. A set of school exercise books might reveal everything, but they have been missing for nearly forty years. From summers in Cornwall to London in the twenty-first century, long after they have disappeared, Evie/Stevie go on challenging everyone’s ideas of what their lives should turn out to be. (Virago, July 2014)

“The reunion belatedly cranks the plot into gear – this is the chance to revisit the night of the party and speak to the witnesses. A set of exercise books that went missing on the fatal night seems crucial to the mystery. But this isn’t ultimately the most satisfying aspect of the novel; the greatest pleasures involve the luxury of the long view. Who has aged best? Who is the most successful? Will the youthful Marxists have swapped one ideology for another or sold out completely? More serious are the meditations on the changing aims of higher education.”

“Even when the plot gets a little lost, Grant’s beautiful writing carries the novel; an awkward smile is “a great piece of muscular stupidity spread across my face”. And she has a real knack for observation, gently sending up those in her generation who feel they need to “keep up appearances” by pretending not to have sunk into bourgeois suburbia: Adele’s friend Rose says her home is in Brixton, though “the map might have argued that she lived in Dulwich”.”

“The problem with this otherwise fine novel is that there is not much of a mystery to be solved. Her family secrets, revealed in some handy notebooks, are not really very significant … But Grant excels in capturing the absurdity of the times, and the phenomenon of a university consciously trying to introduce societal change through exposure to brutal architecture and experimental teaching. She is also brilliant on the naivety and vulnerability of the young students…”

“With its hindsight about tragic events and paths not taken, the novel has similarities to Julian Barnes’s 2011 Booker winner, The Sense of an Ending. It has a similar insistence on reshaping the past, how information that wasn’t available first time round could have changed the entire story, although it resists artful solutions, and is structurally looser.”

“Often, Upstairs at the Party feels like a darker, more cynical version of Kate Atkinson’s Emotionally Weird (another, much more playful semi-autobiographical novel set at a northern university in the early 70s). There was no doubt that Effie, the narrator of Emotionally Weird, felt affection for the time of her youth, but any that Adele feels is more complex and barbed, or at least slower to surface. She thinks the music of the era, glam rock, is “dire” and pays almost no attention to its news and politics, yet she seems more fascinated with how it has shaped her the older she gets.”

“The bigger mystery in this brilliantly observed but determinedly unsettling book is Adele herself. And it’s one that’s never really solved. “

“Grant’s vision is clearly that of a Brideshead for a different generation – Adele’s immature infatuation with Evie (she’s possessed by a pulsing desire to kiss the nape of the girl’s newly shorn neck) eventually develops into a full-blown but ill-fated affair with Evie’s brother George, for example – but it lacks the sincere sense of loss that haunts Waugh’s classic. Which isn’t to accuse Grant’s novel of being frivolous; indeed one might describe it as too earnest.”

“The best and most heartfelt writing comes in the first section. Grant’s evocations of the period are not always cliché-free: ‘Girls in Laura Ashley frocks let their long hair fall across their faces, and boys in loon pants and cheesecloth shirts wooed them with tightly rolled joints assembled on the back of Joni Mitchell albums.’ Yet on the whole, she serves up a rich and often alarming portrait of York university, where she herself studied (along with a left-wing firebrand called Peter Hitchens), at a time when its own doomed idealism could rival that of any adolescent.”

“The big bulldozer of hindsight flattens everything into a two-dimensional frieze, each frame already familiar. We guess long before we get to the 1980s that Adele’s friend Bobby will die of Aids. The whistle-stop tour of “spaceships, the conquest of Everest, the four-minute mile” leaves little room for characterisation. Dialogue is consistently wooden. Worst, the dash through the decades is paralleled by rushed prose.”

Upstairs at the Party by Linda Grant The Omnivore