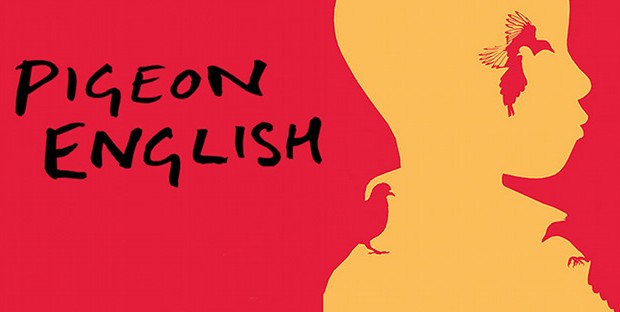 Blurb: Newly arrived from Ghana with his mother and older sister, eleven-year-old Harrison Opoku lives on the ninth floor of a block of flats on a London housing estate. The second best runner in the whole of Year 7, Harri races through his new life in his personalised trainers – the Adidas stripes drawn on with marker pen – blissfully unaware of the very real threat all around him. With equal fascination for the local gang – the Dell Farm Crew – and the pigeon who visits his balcony, Harri absorbs the many strange elements of his new life in England: watching, listening, and learning the tricks of inner-city survival. But when a boy is knifed to death on the high street and a police appeal for witnesses draws only silence, Harri decides to start a murder investigation of his own. (Bloomsbury)

“Filled with energy, humour and compassion, Pigeon English is a gut-wrenchingly sad novel that makes you laugh out loud.”

“[Pigeon English] has a powerful story, a pacy plot and engaging characters. It paints a vivid portrait with honesty, sympathy and wit, of a much neglected milieu, and it addresses urgent social questions. It is horrifying, tender and funny. In this case, though, my praise is quite irrelevant because – unusually for any novel, let alone a first one – Pigeon English is critic-proof … it is transparently based on the story of Damilola Taylor.”

“Harrison’s polyglot narration – combining street slang and West African argot – convincingly reflects the jumbled, frenetic and crude workings of an 11-year-old’s mind. The well-caught interplay between innocence and precocity helps generate a powerful heart-in-mouth dread for Harrison’s safety as events spiral out of control. Despite the build-up, Pigeon English is not an unmitigated triumph. The murder mystery plot lacks the unbearable suspense of Room …”

“Kelman is not afraid to take some very bold risks, ranging from the sudden shock of the book’s unhappy ending to the inclusion of a talking pigeon with a distinctly un-pigeon-like tendency to philosophise… Poetic, inventive, humane, sometimes funny, Pigeon English is nevertheless an odd book, perched awkwardly between teen and adult fiction.”

“Too conscious of the gulf between its subjects and its inevitably middle-class readers to be truly convincing.”

“Told with humour, despite the gritty subject matter and setting, in essence it’s the tale of an innocent abroad … Pigeon English charms its way into some hard places, which feels, at the risk of a huge generalisation, a very British approach to a first novel.”