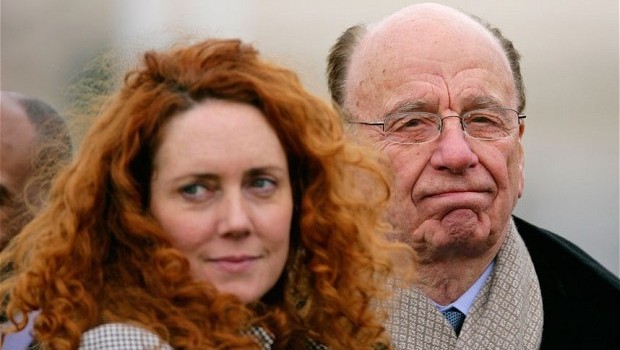 Hack Attack: How the Truth Caught Up with Rupert Murdoch by Nick Davies

Blurb: At first, it seemed like a small story. The royal editor of the News of the World was caught listening to the voicemail messages of staff at Buckingham Palace. In 2007 he and a private investigator were sentenced to prison and the case was closed. But Nick Davies felt sure there was more to it and began his painstaking investigation which ultimately exposed a world of crime and cover-up, of fear and favour – reaching all the way to the top. This book is the definitive, inside story of one of the major scandals of our age. Drawing on exclusive interviews with private investigators, journalists, politicians, police officers and Murdoch executives, it blows the lid off Fleet Street, Scotland Yard – and Downing Street. It tells for the first time how Davies and a network of rebel lawyers, MPs and celebrities took on Rupert Murdoch, one of the most powerful men in the world. It takes us into the newsroom of the News of the World and exposes the bullying and law-breaking that went on there, and into the underworld of the private investigators who hacked phones, listened to live calls and bribed the police. It discloses how News International attempted to protect itself with lies and money; how the press regulator floundered; and the history of failure and official secrecy inside police ranks. Above all, this book paints an intimate portrait of the power elite which gave Murdoch privileged access to government, and allowed him and his people to intimidate anyone who stood up to them.

“You would expect the Guardian’s Nick Davies, who exposed phone hacking and other criminality among News of the World journalists, to write the best full-length account of the scandal, and so he has. He gives us not just the story – which, though there are many new details, will probably be familiar in broad outline to most readers – but also the story behind the story, explaining how and why he set about exposing the NoW’s endemic criminality and recalling the numerous frustrations and dead ends he encountered.”

“This book is as exciting as a thriller but far more important because it provides such a horrifying portrait of the media/political class that has governed Britain in recent years. It also raises searching questions about the conduct of the police, who were let off so lightly in Lord Leveson’s naive report into the scandal. This book should be compulsory reading in journalism schools and must be read by anyone who wishes to understand how British politics actually works. Few people emerge with credit. It remains quite extraordinary that Cameron, despite repeated warnings, took Coulson with him into Downing Street and even more extraordinary that he has emerged relatively undamaged.”

“Hack Attack deserves a lot of praise and success. It is a masterly summary of the hacking affair, as well as the ingenuity and persistence that lead to great journalism. If there is one quibble I have, it is with the subtitle – “How the truth caught up with Rupert Murdoch”. Because it hasn’t yet.”

“Hack Attack is especially good in tracking the sustained and intractable obstruction of the Metropolitan Police. He sets out too the threats of retaliation against himself, his editor Alan Rusbridger and The Guardian (absent is the parallel campaign of unsuccessful intimidation against The Independent)… His set-pieces – a close-up of Andy Coulson’s dirt-digging, back-stabbing newsroom and Rebekah Brooks’s wedding in 2009, attended by anyone who was anyone in Britain (240 people) – are breathtaking.”

“What is revealed here, in painful, careful detail, is a journalism that held power in contempt – and, together with power, held in contempt people both famed and obscure, dominant and meek. Those whom the tabloids wished to destroy were swept into the maw of a press that devoured them, all the while proclaiming that it was engaged in the most righteous of tasks, that of uncovering hypocrisy and corruption. Nick Davies, the Guardian reporter who led that newspaper’s lonely (at first) revelations of phone hacking at the News of the World, has, in his exhumation of this trove of journalistic ordure, done a colossal service to Britain’s democracy.”

“Hack Attack is a very British book, to the good, I think. It teaches the reader a whole new lexicon of skulduggery. Politicians who fail to support the editorial line of the Murdoch newspapers are “monstered,” their personal lives taken apart with an amalgam of facts, lies and trumped-up scandal. The toolbox of the sleazy reporter includes “blagging,” “muppeting” and “double whacking.” … The cloak-and-dagger activities of the lawyers and journalists pursuing the Murdoch empire make for delicious reading”

“…his worldview as an investigative journalist works against him: Instead of preparing a narrative based on the towering personalities of, say, Brooks or James Murdoch, Davies opts for a chronology of his own reporting. Seemingly no killer e-mail exchange or phone call merits omission from this book. Consider that Chapter 1 is titled “February 2008 to July 2009.” Yum! At the tail end, Davies evolves from gumshoe to ideologue, lamenting that his work didn’t reverse the drift toward neoliberal laissez-faire governance, as if he expected it would. “For a while, we snatched a handful of power away from one man. We did nothing to change the power of the elite,” he writes, in what may stand as the phone-hacking scandal’s foremost humblebrag.”

Will Gore, The Independent on Sunday

“Davies may be on the side of the just. But he is as ideologically driven as those he despises. In the end, his real target is  neo-liberalism, which “has reversed hundreds of years of struggle” and undermined the protection offered by democratic governments to ordinary working people. The consequence is that, while it is a great read, Hack Attack’s outlook sometimes feels a little too black and white: you are either with us or against us.”

Hack Attack: How the Truth Caught Up with Rupert Murdoch by Nick Davies The Omnivore