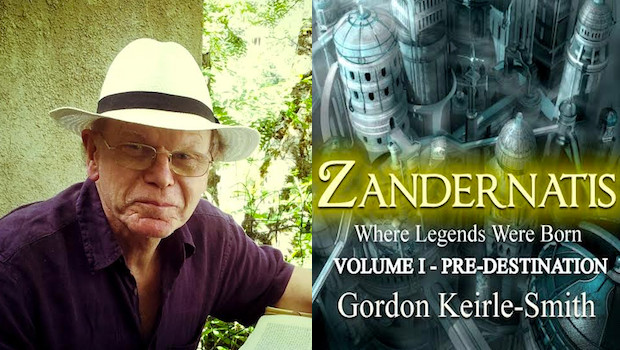 With the first volume of his Zandernatis trilogy, Francophile Gordon Keirle-Smith — who has worked as an artist and in marketing — claims to have invented a whole new genre. If you’re a fan of ancient legends, interested in philosophy and tempted by conspiracy theories, this is one for you.

Tell us a bit about yourself:
I always felt it was important for me to try and live as many lives as possible — and at the risk of seeming to be something of a dilettante, I do seem to have crammed in quite a few. Writing was always my first love, but around the age of 21 (after two years in an advertising agency and one in a repertory theatre) I morphed into an artist exhibiting in London’s Cork Street with a studio in a West End theatre.

A year later I moved to Paris, where I worked as a tour guide before heading a team of 40 language teachers in a business school just off the Champs Elysées. Life became very hectic, leaving little time for art. This was when I decided to paint with words rather than oils and brushes. 18 months later, in 1974, the first version of Zandernatis had been completed. Agents and publishers largely dismissed this effort as being “too ambitious for a first book”. They were probably right.

After two decades in Paris working in communications and advertising — and winning the Toastmaster’s European Speech Championship title twice — I moved to the south of France with my wife and our adopted two-month-old son. There, I built up my own marketing agency. After creating my own “Home Opera Theatre” and website (http://www.operadou.info), retirement began to loom. With the self-publishing tsunami gathering speed, in 2013 I decided to revive Zandernatis.

Who are your favourite authors?
My mother went to school with Arthur C Clark, so I always felt a certain affinity with him. I also devoured William Morris, Lord Dunsany, CS Lewis and Tolkein of course. I was addicted to Lord of the Rings long before the blockbusters.

What book are you reading at the moment?
I am currently revisiting Dune, particularly to see how Frank Herbert uses ancillary material to add an extra dimension to his work.

In writing Zandernatis you claim to have created “a new genre”. Can you give us a flavour of what the book is about?
The book is based upon the discovery of 21 urns buried under the Antarctic ice in 1962 by the Vostok Traverse expedition. These contained a vast library of manuscripts, most of which described the history and governance of an advanced civilisation existing on the Antarctic continent tens or hundreds of thousands of years ago, when the climate was more temperate. There were also two epic poems describing key events in this ancient civilisation’s history.

My new genre is a meta-realist allegory in which an allegorical story is given credence by an abundance of corroborative material. This can be in the form of press cuttings, interview transcriptions (backed by recorded versions on the blog), scientific records, analysis by sociologists and historians, past life regression testimonials, and more. Subsequent volumes, exploring the mystery of the urns’ disappearance, will encompass other media such as webpages and transcriptions from Hansard.

Zandernatis is the first part of a trilogy. What’s going to happen in the next two books?
That would be telling! There will be various things happening on various levels. As far as the retelling of the fable is concerned, we will see our hero brave the dangers of the Forest of Dissemblance and the Deserts of Jerah until he comes to the city of Pardilys, home of the Lord Protectors, creators of Zandernatis and the Paradise Garden. We will witness the momentous events that led up to what became known as the “Fall of Man” in sacred texts written many tens of thousands of years later.

On the parallel documentary level we will see the “conspiracy” unfolding, learn that relics of a genuine unihorn have been discovered (backed by solid proof) and witness some of the greatest advances in past life memory research ever made. We will also catch glimpses of the sometimes disturbing impact the Haakon Urn writings are having on our society.

How did you go about researching Zandernatis?
The internet gives all of us access to everything, from the mundane to the bizarre. And when you’re working in the meta-realist genre, if there is any shortage of corroborative evidence, you are perfectly free to create it! What has been surprising though are a number of curious coincidences that have cropped up at various times while researching this project. In particular the recent discovery that the most-visited place in Antarctica, on the peninsular stretching towards the tip of South America, is called Paradise Harbour.

Why did you decide to self-publish, and how are you marketing your book?
I decided to self-publish simply because you can. And because the time to market is so unbelievably fast. At last writing becomes the supreme art form where you can stay in full control and not be a slave to market forces, prevailing trends or anyone else’s publishing policy. There is tremendous satisfaction in being able to manage all aspects of your book, from the actual writing to doing the page layout, working with your cover designer and editor.

Marketing is a vital component, and I’m lucky enough to have experience in this field. So far, I have been targeting various groups with “teasers” that will be of particular interest to them. For example, a campaign aimed at those intrigued by conspiracy theory led to a 45 minute Skype interview with Rob Daven of ConspiracyHQ.com. Sending advance copies to reviewers is also key to edging up in the Amazon ratings.

Imagine your ideal reader: which authors do they enjoy?
Due to the broad spectrum of interests this book covers, the ideal reader is almost impossible to define, so it would be more a question of the genres, rather than the authors, they choose. Those drawn to ancient lore and legends will find much to please them here, conspiracy theory fans will also discover a potential cause celèbre, while the more philosophical may enjoy seeking parallels with our own times. The readers who get the most out of this book will be those who can “go with the flow” and suspend their disbelief just long enough to start really pondering these alternative truths.

If you had to sum up your book in a Hollywood pitch (e.g. Harry Potter meets the Hunger Games, or Charles Dickens meets Emily Bronte), how would you describe it?
I’d say, The Hobbit meets Gilgamesh and revisits Genesis.