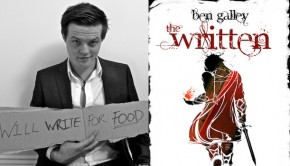 25-year-old Ben is the author of The Emaneska Series, a fast-paced fantasy trilogy that he describes as the “love-child of