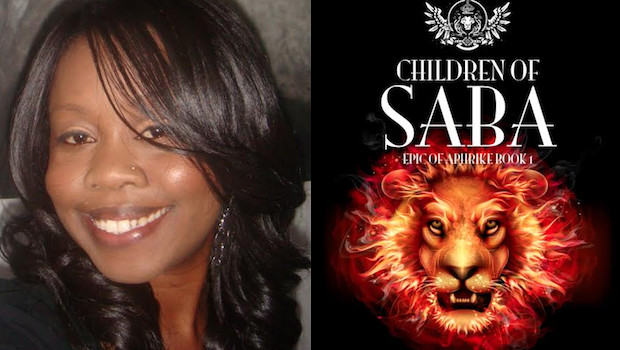 Kenyan writer N.K. Read gets frustrated by ignorance of Africa’s rich history. Her debut novel, Children of Saba, attempts to redress the balance. Drawing on ancient African legends, this is an epic fantasy that will be enjoyed by adults and teenagers alike. With a trilogy planned, we’re sure it won’t be long before someone snaps up the film rights.

Tell us a bit about yourself:
I was born and brought up in Kenya. In 1996 I moved to Australia to study public relations at university. It was there I was drawn to storytelling and theatre, taking up the latter as a minor degree. However I couldn’t resist the lure of the corporate world, launching into a career in advertising. When I could I dabbled in freelance journalism, writing for several publications and news outlets including the Kenya Television Network, The Sydney Morning Herald and The Guardian. I then took my passion for storytelling to the next level, directing three films, two of which played across cinemas in Australia. Now living between Nairobi and Sydney, Australia, I still dabble in corporate marketing while writing fiction and news articles feverishly in my down time. Other than a good book, I enjoy hiking, running and cooking with my husband, but what really gets me up in the morning is my heart for Africa and my people.

Who are your favourite authors?
I’m inspired by the greats — J.R.R Tolkien, C.S. Lewis, Isaac Asimov — and epic storytellers such as George R.R. Martin and Victorian author Sir H. Rider Haggard (Kings Solomon’s Mines). Chinua Achebe is one of my African storytelling heroes and Chimamanda Ngozi Adichie is not far behind him. For some reason, I’m also drawn to the spy genre thus Frederick Forsyth, Ludlum and John Le Carré. Lately I’ve taken to buying Lee Child’s Jack Reacher series, mostly at the airport.

What book are you reading now?
I’ve got a few on my nightstand. Americanah by Chimamanda Ngozi Adichie, The Conqueror series by Conn Iggulden and Far from the Tree by Andrew Solomon. I’ve just finished A Dance with Dragons (George R.R. Martin) and I’m rereading Frederick Forsyth’s The Cobra (I’m a mad Forsyth fan!)

Tell us about Children of Saba:
The series unearths the mysteries and legacy of an ancient race responsible for throwing shadows on time’s dawn. This enigmatic race bequeaths a secret heirloom so powerful it could ‘end all existence’ to the ancestral line of a modern Kenyan family, the Munenes.

After their parents are taken hostage by a sworn enemy who seeks their long lost and forgotten family inheritance, the Munene twins are forced into hiding at their grandmother’s remote farm on the edge of the Kenyan savannah. Under the growing cloud of darkness that seeks to envelop the earth, Mwenda and his sister Kendi meet a mysterious goat herder and are catapulted into the past, almost 3000 years back in time.

They find themselves in the magnificent Kingdom of Sheba where they’re plunged into a quest discover their family’s legacy — a mystery so primeval and unutterable that it has faded from the present-day. They join forces with the fiercely beautiful Queen of Sheba and the elite Meroë Nthaka warriors in battling a dark, ancient enemy who seeks her throne and access to the twins’ secret.

Caught in throes of an epic conflict, the twins realise that that their quest involves the mäfca of Sämay — the key of heaven — a most powerful object that their ancestors — the enigmatic race of the First Men — believed could forge a path between the divine and human. The twins eventually learn that they are the only two people on the earth — past, present and future — who can sway the outcome of a foreordained chain of cataclysmic events that are linked to their family’s present predicament and could catastrophically affect all three dimensions of time.

Children of Saba recreates the glory and majesty of a prodigious continent, appealing to lovers of the Chronicles of Narnia and Lord of the Rings series. It is the untold story of Africa, one that re-imagines the legacy of a vast ancient race responsible for throwing giant shadows upon the dawn of time. It is a chronicle that leaps beyond the boundaries of the present and transcends the parameters of the origins of the Earth.

What were your inspirations for the book?
About two years ago, I discovered the ancestral link between the tribe of my heritage, the Meru of Kenya with the enigmatic Meroë who once ruled Nubia. The Meroë were integral leaders in the ancient Kingdom of Sheba and were seemingly connected, further back in time, with the ancient and mysterious ‘First Race’. This people of antiquity, also known as the Meru, have disappeared from the annals of modern history yet their legacy reverberates through time.

Ancient writers state that ‘they’ were a civilisation that predated the Greeks, the early Romans and the Egyptians. When the curtain of history was lifted, the civilisation of Egypt was hoary with age, rich languages, complex systems of religion, and astounding architectural achievement — proof that the earth is older than we perceive. The story of what lay behind Egypt fascinated the whole ancient world for it was clear to all ancient philosophers that their culture did not originate upon the Lower Nile. Who then was her teacher? The Egyptians of old themselves claimed that their ancestors were strangers who in very remote times settled on the bank of the Nile, bringing with themselves the civilisation of their mother country, the art of writing and a polished language. They came from the direction of the setting sun and were known in pre-history as the ‘Meru’, the most ancient of men.

Exploring who they were and could have been greatly inspired and excited me and I sought to bring their story to life. Thus the Epic of Aphrike was born.

The main characters in Children of Saba are teenagers —what ages will the book appeal to?
The main characters are just under 18. Like many modern seventeen year olds they’re quite savvy, worldly and knowledgeable – Mwenda is a secret hacker and Kendi moonlights as a jazz singer. However, until their parents are kidnapped and they come face to face with a dark enemy, they’re innocent to life’s polarities and harsh truths of fighting evil, facing despair, death and immortality, and surrendering the false ego and free will to knowledge, wisdom and enlightenment.

Children of Saba explores their ‘coming-of-age’ journey into adulthood as they shed their naïveté in the face of insurmountable odds. While the book is written mainly from their perspective, it also features strong supporting adult characters who become their guides through their spiritual and physical journey through time, emotional growth and their surrender to wisdom.

With its storylines full of adventure and intrigue, the book will charm young adults but I also believe it has a strong appeal to adults. One of the underlying reasons I wrote Children of Saba is because I believe there is a growing tendency in our modern society to let the next generation ‘figure it out for themselves’ instead of passing on crucial wisdom and teaching to those who need it most. The African culture has a great tradition of the older generation nurturing and teaching the younger ‘the way in which to walk’. Growing up, my grandmother, aunts and uncles were a crucial part of my upbringing and without their legacy of wisdom I wouldn’t be who I am today. I stand on the shoulders of giants.

The book is the first in the series. How many more books are planned?
There are two more books planned. The second is Heirs of Kush, which tells of how the Munene twins are drawn back into the ongoing eternal battle that rages in the skies and cosmos above them. Their ancestral family line was chosen to guard a great secret but one of their own, weighed down by its burden, spoke carelessly … and someone was listening. The stakes have now risen, and the twins, pursued by their old enemy, Isheshemi, are plunged into yet more peril and adventure, traveling into a bygone Aigypt and Æthiop, to the Western sands of the Sahara, and to Great Zimbabwe and even high up into the second dimension, all the while fighting off the prodigious 99, the cast-outs of eternity. Will they right their ancestor’s mistake before time itself runs out?

The third volume, Men of Meroë, tells of the Munenes’ last defence against the great, dark entity Isheshemi. Traveling to the third dimension of time, the twins seek the First Men of the ancient world, the forgotten wise men of the Golden Age, to consult them on how to overcome their now more powerful enemy who has returned to earth and taken it hostage. They also finally get the chance to the lift the curtain on their ancestors, the vast ancient African race that threw such giant shadows upon time’s dawn. Their journey culminates in the ’mountain from which all knowledge in the universe comes from and to which all knowledge ultimately returns’ where they face their ultimate, insurmountable task.

You describe your book as “the untold story of Africa”. How does your book challenge European and American perceptions of Africa?
For many years, Africa was synonymous with war, strife, disease and poverty, or alternatively wildlife and safaris. Yet, as modern Africa rises, there is a rich legacy of majesty, splendour and glory of its peoples, past and present, that has yet to be fully explored.

Contrary to popular belief, modern Africans are not the progeny of simplistic, backward, uneducated tribes but the sons and daughters of the first men of olde: “destined before the very beginning, purposed afore the present now, celebrated and feared by the illustrious, the brave and the wise, the mighty and powerful who rose from the loins of Ibrahim and Cush, the anointed of grace, the offspring of valour, they who thrived on the vast highlands of the Samen, who carved channels in earth’s living rock and formed vast lakes, who joined mountains with magnificent arches, aqueducts and bridges, who raised the pyramids, who formed the grottoes of the Nile and scooped out the caverns of Salsette and Elephante!”

Imagine your ideal reader: which authors do they enjoy?
My reader is drawn by a variety of genres from fantasy to coming-of-age and action/adventure. They enjoy the Game of Thrones series (George RR Martin), Wilbur Smith’s River God and The Seventh Scroll. They’re also intrigued by the convergence of time travel with daily reality as portrayed in The Time Traveller’s Wife (Audrey Niffenegger) and charmed by the vastness of space operas like the Dune Chronicles (Frank Herbert).

If you had to sum up your book in a Hollywood pitch (eg Harry Potter meets the Hunger Games, or Charles Dickens meets Emily Bronte), how would you describe it?
‘Lord of the Rings meets the Dune Chronicles (in Africa)’.

Download a sample chapter of Children of Saba (PDF)

Buy Children of Saba from Amazon 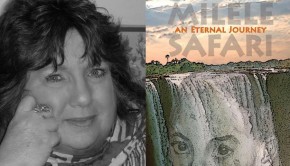