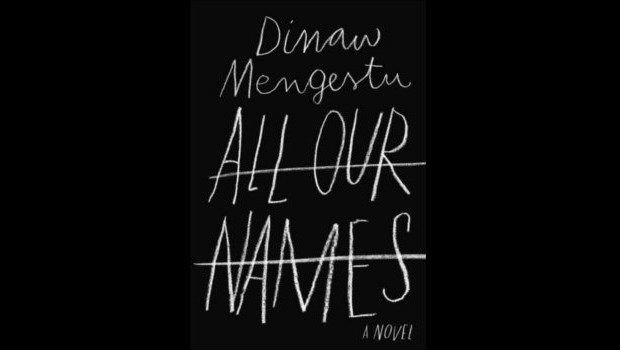 All Our Names by Dinaw Mengestu

Blurb: In Uganda, two young men get caught up in a revolt against the post-colonial regime in the early 1970s. As the line between idealism and violence becomes increasingly blurred, the friends are driven apart – one of them into the deepest peril. In a quiet town in the American Midwest, an exotic stranger arrives: an exchange student from Africa called Isaac. Helen, the social worker asked to help him settle in, quickly falls for him, though she soon learns to keep their affair hidden from prejudiced eyes. And she soon realises that Isaac is haunted by his mysterious past. (Sceptre, June 2014)

“Mengestu’s style is restrained, but his scope is vast – moving between the stunning East African landscape, where even the splendour of the sunset is a portent, to an introverted Illinois, a microcosm of America’s collective guilt at the aftermath of the disastrous war in Vietnam and its reluctance to accept a post-segregation society. Worlds on a cusp, powerfully drawn: notable above all is Mengestu’s desperately moving portrait of a compromised friendship.”

“So yes, superficially, All Our Names is a book about an immigrant, but more profoundly it is a story about finding out who you are, about how much of you is formed by your family and your homeland, and what happens when those things go up in smoke. There is great sadness and much hard truth in this novel, as there is everywhere in Mengestu’s fiction. But like the best storytellers, he knows that endings don’t have to be happy to be satisfying, that mysteries don’t need to be explained, that discriminating between what can and can’t be known is more than enough”

“What’s fascinating about All Our Names is the unsettling way it engages with history – both the history of Uganda and literary history. Those with the right knowledge will be able to place this novel in an exact historical context, but that’s rather beside the point: the president is not named as Amin; the university is not called Makerere; there are odd moments when events of 1972 and 1979 are conflated; there is (maybe) a still greater displacement of elements of the Great Lakes refugee crisis of the mid to late 90s. It does not matter that these different time periods seem to creep into the story – it’s all kept deliberately vague.”

“The most moving parts of All Our Names show the narrator’s desperate love for his idealistic friend. Isaac is a true believer in liberating the poor from oppression, but the battle he’s fighting quickly corrodes into a rash of atrocities committed against the most helpless. It’s a grim, small-scale version of how people’s movements have repeatedly devolved into fits of paranoia that produce mass graves where none of the bodies has a name.”

“Mengestu seems, at times, to be as vague about the politics of Uganda as this Isaac himself is. It is a conscious choice … The novel requires this vagueness: what really interests Mengestu is the struggle of the individual against the forces of culture and country. But the difficulty of this fabular approach is that it too often leaves us with a version of Africa as a place of cyclical violence in which the laws of cause and effect seem ill-defined.”

“Mengestu has so hushed every aspect of All Our Names – plot, style, characterisation – that it results in a severely anaemic work. Perhaps this is meant to mirror the post-traumatic inertia that being a witness to extreme violence and horror has instilled in Isaac. The blanched, mercilessly stripped prose, which is the dominant and unquestioned orthodoxy of contemporary Anglophone fiction, especially that coming out of MFA courses, simply cannot rise to the importance of his subject. Where is the density that this kind of novel requires?”

All Our Names by Dinaw Mengestu The Omnivore