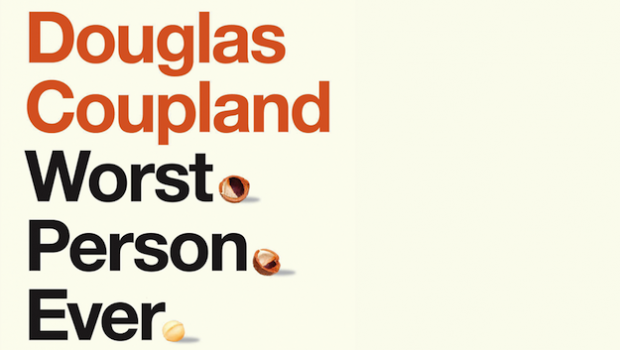 Worst. Person. Ever. by Douglas Coupland

Blurb: Meet Raymond Gunt. A decent chap who tries to do the right thing. Or, to put it another way, the worst person ever: a foul-mouthed, misanthropic cameraman, trailing creditors, ex-wives and unhappy homeless people in his wake. Men dislike him, women flee from him. Worst. Person. Ever. is a deeply unworthy book about a dreadful human being with absolutely no redeeming social value. (William Heinemann, 2013)

“In his last few novels, his formula of frivolous, witty fun has felt as though it was beginning to tire. But his latest — Worst. ­Person. Ever. — is an outrageous comic riot, delivered as a tear-inducingly funny and pitch-black farce.”

“It’s not just verisimilitude. Most of the things readers traditionally look to fiction to provide are absent. The plot is a cavalcade of more or less random events. Nothing at all seems, or is felt by the reader, to be at stake: the prospects of global nuclear annihilation and the loss of a highly collectable Cure T-shirt rank approximately equal, peril-wise. The characters do not develop and their motivations are implausible and capricious …  Live by the sword, die by it. Worst. Person. Ever. succeeds by virtue of its verbal energy, the brio of its invention, the snappiness with which successive gags and ever more appalling atrocities are piled on.”

“Douglas Coupland’s frenetic style has never been to everyone’s taste and for the opening fifty pages the initiated will wonder where it’s all heading. The answer, of course, is nowhere, at least in terms of standard narrative, but if you can live with that it settles into an often hilarious ride, with several laugh-out-loud moments mostly springing from Coupland’s inspired observation of our multi-media techno driven zeitgeist. ”

“Gunt is a farcical anti-hero in a novel more stand-up than satire, more Despicable Me than American Psycho. I can’t locate very much seriousness, but I certainly enjoyed trying.”

“In Gunt, Coupland has created an abhorrent but strangely likeable individual and adeptly built an acerbic social commentary around him.’

“350 pages is a long time to spend in the company of such a vile narrator as Raymond for such little reward. And is a critique of a 15-year-old reality TV format and some creative swearing really all that we can ask any more of a writer whose first novel defined a generation? … Fortunately, his heart doesn’t seem in it and Worst. Person. Ever. reads like a failed experiment; a misjudged one-off.”

“Through total immersion in the banality it purports to expose, his new novel out-sarcasms itself. Like Chuck Palahniuk’s Snuff, it’s determined to gross you out, offering a barrage of sexism, homophobia, shit, vomit, sputum, and all the other stuff of adolescent humour. Worst. Person. Ever. can only appeal to people who like to hear women belittled, and everything trashed – and it’s hard to see the necessity for it when we’ve already got plenty of trash and belittled women.”

“… dated and lazy. Dated because Gunt is reminiscent of a character out of an early-career Martin Amis novel, a repellent London geezer obsessed with sex, self and scatalogical variations of the same. Even the name is Amis-lite. Dated also because the subject matter, a quest by Gunt to film a reality-TV show, feels like an old target. Lazy because this Gunt character feels like what he is, a Cockney half-imagined by a Canadian. He even says “diapers”.”