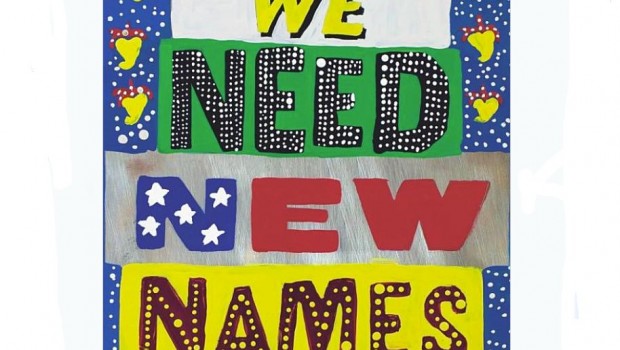 Blurb: ‘To play the country-game, we have to choose a country. Everybody wants to be the USA and Britain and Canada and Australia and Switzerland and them. Nobody wants to be rags of countries like Congo, like Somalia, like Iraq, like Sudan, like Haiti and not even this one we live in – who wants to be a terrible place of hunger and things falling apart?’

Darling and her friends live in a shanty called Paradise, which of course is no such thing. It isn’t all bad, though. There’s mischief and adventure, games of Find bin Laden, stealing guavas, singing Lady Gaga at the tops of their voices. They dream of the paradises of America, Dubai, Europe, where Madonna and Barack Obama and David Beckham live. For Darling, that dream will come true. But, like the thousands of people all over the world trying to forge new lives far from home, Darling finds this new paradise brings its own set of challenges – for her and also for those she’s left behind. (Chatto & Windus)

“Darling is 10 when we first meet her, and the voice Ms. Bulawayo has fashioned for her is utterly distinctive — by turns unsparing and lyrical, unsentimental and poetic, spiky and meditative..”

“How does a writer tell the story of a traumatised nation without being unremittingly bleak? NoViolet Bulawayo manages it by forming a cast of characters so delightful and joyous that the reader is seduced by their antics at the same time as finding out about the country’s troubles.”

“Darling and her friends steal guavas from rich people’s houses, and dream of escaping to Europe or America. And suddenly, Darling really is in America, with her aunt Fostalina who lives in “Destroyedmichygen”; a run-down and snowy Detroit. Bulawayo conveys the culture shock brilliantly — after the vividness of Paradise, this frozen grey mausoleum.”

“It is a familiar tale of displacement; but what makes this novel wholly memorable is Darling’s voice. Though at times her lyrical gusto hits false notes, offering insights and observations beyond the means of a child, it creates a fictional world that is immediate, fresh, and identifies the arrival of a talented writer.”

“Having conjured up a dramatic scene or appalling image, Bulawayo often seems uncertain how to resolve it, and her chapters can end on a trite or bathetic note … Eventually, the book comes to a halt rather than resolves, closing with another grim image. If Bulawayo is better at individual scenes than overall structure, she is at least in full command of her sparkling prose.

“The more Darling becomes an American, the less vibrant Bulawayo’s writing becomes. When Darling and her Nigerian and African-American girlfriends watch pornography online, we get a mechanical catalog of sex acts that pales in comparison with the wrenching discussion that appears earlier in the book when Darling and two friends in Paradise try to help a friend get rid of the baby she is carrying, the child of her own grandfather. And yet, despite the course of the latter half of the novel, Bulawayo is clearly a gifted writer. She demonstrates a striking ability to capture the uneasiness that accompanies a newcomer’s arrival in America, to illuminate how the reinvention of the self in a new place confronts the protective memory of the way things were back home.”

“Very much a novel of two halves … The first fizzing with life in the midst of death and deprivation; the second rather too bloated and directionless in the land of plenty.”

“ Bulawayo pulls off the child narration with panache, rendering Darling’s account elliptical but providing us with enough information to read between lines and fill in gaps …  the second section fails to live up to the colour, hardship and exuberance of the first. Darling as a fish out of water and later as a semiassimilated American yields few surprises.”

We Need New Names by NoViolet Bulawayo The Omnivore