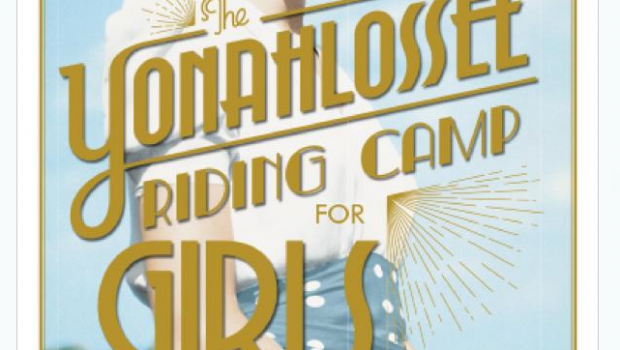 The Yonahlossee Riding Camp for Girls by Anton DiSclafani

Blurb: Thea Atwell is fifteen years old in 1930, when, following a scandal for which she has been held responsible, she is ‘exiled’ from her wealthy and isolated Florida family to a debutante boarding school in the Blue Ridge Mountains of North Carolina. As Thea grapples with the truth about her role in the tragic events of 1929, she finds herself enmeshed in the world of the Yonahlossee Riding Camp, with its complex social strata ordered by money, beauty and equestrienne prowess; where young women are indoctrinated in the importance of ‘female education’ yet expected to be married by twenty-one; a world so rarified as to be rendered immune (at least on the surface) to the Depression looming at the periphery, all overseen by a young headmaster who has paid a high price for abandoning his own privileged roots.. (Tinder Press, 2013)

“The title might lead the reader to expect a jolly schoolgirl romp, but this is a sombre coming-of-age novel from a somewhat solipsistic perspective. It’s a long book but what’s striking is what Anton  DiSclafani doesn’t put in it. Though Thea develops a strong attraction for the place, Yonahlossee is never vividly described. As a first-person narrator, Thea is somewhat blank and her emotional responses are detached. The other girls are only sketched in – aloof Leona, friendly Sissy, tedious Mary Abbott – and Thea’s deepest relationship is with Naari, the horse she is assigned.”

“If this boarding school tale initially exudes the innocent air and demure demeanour of the debutante, it evolves into something startlingly pacy, racy and red-blooded. Pitched somewhere between Curtis Sittenfeld’s Prep and Riders by Jilly Cooper, Malory Towers it most certainly is not.”

“The ingredients of Anton DiSclafani’s first novel, The Yonahlossee Riding Camp for Girls, sound as if they’d been plucked from two genres: the young-adult category and the historical romance … What makes “Yonahlossee” emotionally engaging in its own right — this summer’s first romantic page turner — is Ms. DiSclafani’s sure-footed sense of narrative and place, and her decision to portray her heroine, Thea Atwell, in all her complexity: fierce, passionate, strong-willed, but also selfish, judgmental and self-destructive.”

“Shame, money and love are the hot coals fuelling this drama. As Thea stumbles into adulthood, the author keeps tight control of the narrative, despite the occasional boarding-school cliche. DiSclafani’s writing is at its most affecting when she slows down. Her exploration of the complex nature of attachment – whether to a horse, human, or a home – is beautifully handled. Even readers with little interest in the equestrian will be kept in the saddle by this gripping portrait of our animal instincts.”

“The novel finally achieves some forward motion in its muddied final laps, heroically unscrambling a host of plot lines. In the course of all this, Thea will engage in more bad behavior, without exhibiting any remorse or sense of conflict, rendering her even less likable. “I had wanted something very badly,” she calmly explains, “and then I had gotten it, and the getting kept getting better.” She sounds like a middle-aged madam rather than the independent young woman DiSclafani presumably intended.”

The Yonahlossee Riding Camp for Girls by Anton DiSclafani The Omnivore