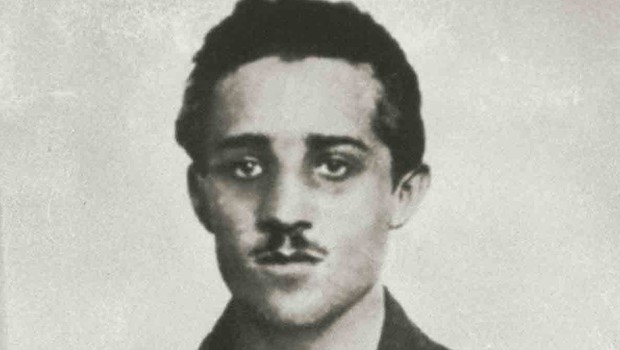 The Trigger: Hunting the Assassin Who Brought the World to War by Tim Butcher

Blurb: On a summer morning in Sarajevo a hundred years ago, a teenage assassin named Gavrilo Princip fired not just the opening shots of the First World War but the starting gun for modern history, when he killed Archduke Franz Ferdinand. Yet the events Princip triggered were so monumental that his own story has been largely overlooked, his role garbled and motivations misrepresented. The Trigger puts this right, filling out as never before a figure who changed our world and whose legacy still has an impact on all of us today. Born a penniless backwoodsman, Princip’s life changed when he trekked through Bosnia and Serbia to attend school. As he ventured across fault lines of faith, nationalism and empire, so tightly clustered in the Balkans, radicalisation slowly transformed him from a frail farm boy into history’s most influential assassin. By retracing Princip’s journey from his highland birthplace, through the mythical valleys of Bosnia to the fortress city of Belgrade and ultimately Sarajevo, Tim Butcher illuminates our understanding both of Princip and the places that shaped him. Tim uncovers details about Princip that have eluded historians for a century and draws on his own experience, as a war reporter in the Balkans in the 1990s, to face down ghosts of conflicts past and present.

“…a tour de force. Butcher is a humane but unsentimental observer who creates space for the voices of other travellers who walked these paths before him. No account since Dedijer’s The Road to Sarajevo has so vividly evoked the world and inner life of the “undersized, emaciated, sallow, sharp-featured” young man who found himself sitting opposite an Austrian judge on the afternoon of 28 June 1914. And few have captured so thoughtfully the relationship between terrain and history in a country fraught by conflict.”

“This is expeditionary journalism at its best — a historical inquest radiated through the mind and experience of an outstanding reporter. The subjective eye, and the use of the perpendicular pronoun, have none of the overblown self-indulgence of today’s television pontificators and heavy metal military historians. Tim Butcher, along with James Fergusson, Anthony Loyd and Alec Russell, is the best of the kind I have worked alongside. They all show that there is still life and good writing in real reporting, whatever the gloomsters may say.”

“On his impressive hike to Sarajevo through a land riven with minefields, Butcher reminisces about his time as a correspondent for this paper during the war in Bosnia. This is illuminating stuff, if not path-breaking, but as always with Butcher extremely well written, taut and evocative. But what really elevates this book beyond another journalist’s memoir is the tenacity with which he goes about investigating Princip’s history. His discovery of Princip’s early school reports after trawling through several archives is a moment of genuine excitement and surprise. They mark an important addition to the historical record: I cannot recall any reference to these in the major sources on Princip’s life. They suggest that his politicisation and his disillusion with the Habsburg administration started earlier than was previously thought.”

“Butcher, the author of the bestselling Congo reportage, Blood River, has written a marvellously absorbing book that incorporates first-hand reportage of the 1991-1999 Yugoslav wars. The reportage serves to lift The Trigger above other accounts of Gavrilo Princip and Yugoslav nationalism (of which there are many). A triumph of research, it will appeal to the layman and historian alike.”

“At first it reads oddly, a curious ragbag of material that seems disconnected. It is part a biography of ‘history’s ultimate teenage tearaway’, as Tim Butcher puts it, part an investigation into some of Princip’s surviving family members in Bosnia, an intensely personal memoir by Butcher of his time as a journalist covering the wars in the former Yugoslavia in the 1990s, and partly a discourse into the nature of nationalism.  Yet he weaves the various strands together so deftly that it ends as a triumph of storytelling.”

“…not just the most original of First World War centenary books; it is a travel narrative of rare resonance and insight… In perhaps the book’s most affecting section, he joins a group of young Bosnians on a painfully moving pilgrimage to the mass graves of Srebrenica, reawakening his “persistent sense of shame” that, as a reporter, he saw the horrors of war at first hand, but could do nothing about them. The book’s only false note comes in its final pages, where Butcher tries to defend Princip (who died in prison in 1918) as an idealist who dreamt only of striking a blow for freedom and justice.”

“…while this is emphatically not “part whodunnit”, as its publisher fatuously claims (we know whodunnit; Princip dunnit), it is an illuminating tramp through some very thorny territory… The phrase-making is sometimes clunky and the remoteness of inner Bosnia is overdone. (The author says that Princip’s birthplace hardly features on modern maps, but it’s right there on Google.) In the end, though, Butcher achieves something remarkable with Princip. He promotes him quite plausibly from mad man to everyman; a warning to the future whom the future foolishly forgot.”

Oliver Poole, The Independent on Sunday

“…what makes The Trigger a page-turning exploration of how the forgotten past continues to inform the present is that it is not just a piece of historical detective work. This makes it more important, and relevant, than many of the commemorative works clogging the bookshops. The most affecting passages deal with Bosnia’s more recent wars.”

The Trigger: Hunting the Assassin Who Brought the World to War by Tim Butcher The Omnivore