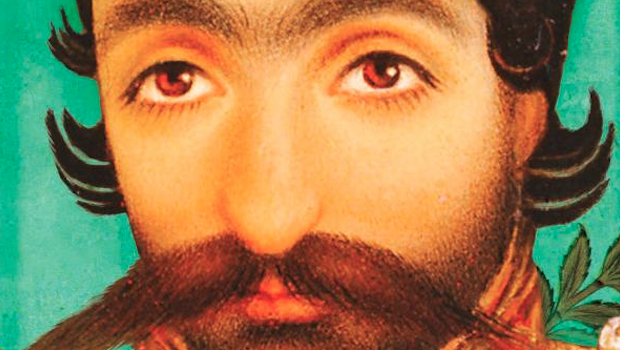 The King by Kader Abdolah

Blurb: It is the nineteenth century and the kingdom of Persia is at a turning point. When a young King, Shah Naser, takes to the throne he inherits a medieval, enchanted world. But beyond the court, the greater forces of colonisation and industrialisation close in. The Shah’s grand vizier sees only one solution – to open up to the outside world, and to bring Persia into modernity. But the Shah’s mother fiercely opposes the vizier’s reforms and sets about poisoning her son’s mind against his advisor. (Canongate Books, February 2014)

“Shah Naser himself was a moderniser, a keen fan of photography, interested in European factories and technology, sometimes producing odd combinations of ancient and modern – electric light was installed in the harem. This duality becomes a fascinating theme of the book, as now the Germans try to woo him with a tour of Krupps, now the British through installing the latest in telegraph systems. The  unadorned ‘barebones’ style of telling exposes serious historical themes, including the rise of new religious movements as well as political struggle.”

“The King probes questions of power and authority through wry fable – Salman Rushdie’s Shame meets Hilary Mantel’s Wolf Hall. Though there are some clichés and infelicities in the English translation, the story is rich with subtle touches: on a rare outing from the palace, the women of the harem pull out binoculars, a gift from the English consul in Tabriz. In the grand tradition of Persian literary satire, the writing is playful, subversive, and compassionate – the king always refers to himself in the third person and converses with his cat, but he can still command our sympathy at times.”

“Iranian Kader Abdolah has spent the past 25 years as a political exile in the Netherlands. The King tells the story of the formation of modern Iran, in the graceful style of The Arabian Nights — there are no genies or flying carpets, but there are wicked queens, sumptuous palaces and enormous jewels.”

The King by Kader Abdolah The Omnivore