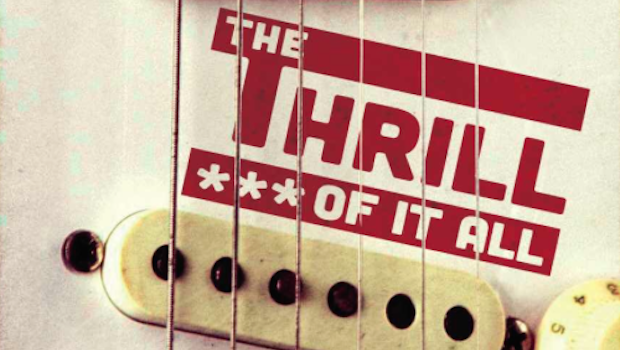 The Thrill of it All by Joseph O’Connor

Blurb: At college in 1980s Luton, Robbie Goulding, an Irish-born teenager, meets the elusive Fran Mulvey, an orphaned Vietnamese refugee. Together they form a band. Joined by cellist Sarah-Thérèse Sherlock and her twin brother Seán on drums, The Ships in the Night set out to chase fame. But the story of this makeshift family is haunted by ghosts from the past. Spanning 25 years, The Thrill of it All rewinds and fast-forwards through an evocative soundtrack of struggle and laughter. Infused with blues, ska, classic showtunes, New Wave and punk, using interviews, lyrics, memoirs and diaries, the tale stretches from suburban England to Manhattan’s East Village, from Thatcher-era London to the Hollywood Bowl, from the meadows of the Glastonbury Festival to a wintry Long Island, culminating in a Dublin evening in July 2012, a night that changes everything. (Harvill Secker, 2014)

“The Thrill of It All takes its time but didn’t drive me nuts – except with jealousy, at the finale of yet another of those wish-I’d-written-that sentences – because, although I felt, right from the first page, that this was an incredible voice for a former lead guitarist, it was also the voice of “one of those Irish guys” you could listen to until either you or they slip under the pub table and start contentedly snoring.”

“As usual with bands, the early years of struggle are the most arresting. O’Connor cannily evokes the mid-80s, the era of Thatcherite iron rule and “Trotskyists in designer suits”, when pop still had cultural and even political clout, along with the grime of shoestring touring to uninterested audiences, shabby rehearsal studios reeking of “piss, chips and sadness” and squalid New York crash pads … O’Connor has clearly learned much from the career of his famous sister, Sinéad, yet the most important people in the life of a stadium band – tour managers, fixers, minders, sound men – are oddly absent … The novel’s third act – the aftermath of success and, in Robbie’s case, decline and fall – confirms that this is less a tale of pop dissolution than of family. Most bands function as dysfunctional families after all.”

“O’Connor keeps his narrative fresh by interspersing it with diary entries and snippets from reviews and interviews. This, along with the chatty and often colloquial tone in which O’Connor writes, creates an almost tangible feel to the novel.”

“O’Connor, author of the bestselling Star of the Sea, is warm without being sentimental, and he cuts effortlessly between comedy and tragedy. Music nerds will love the most satisfyingly voluminous playlists since that Nick Hornby’s High Fidelity.”

“It all chunters along agreeably enough, but there are two problems with  this book. One is the lazy writing, quite content with the bland and the obvious. The other is the subject — as Iain Banks also discovered with Espedair Street, there’s something resistible about novels about made-up pop stars. Awfully resistible.“

The Thrill of it All by Joseph O’Connor The Omnivore