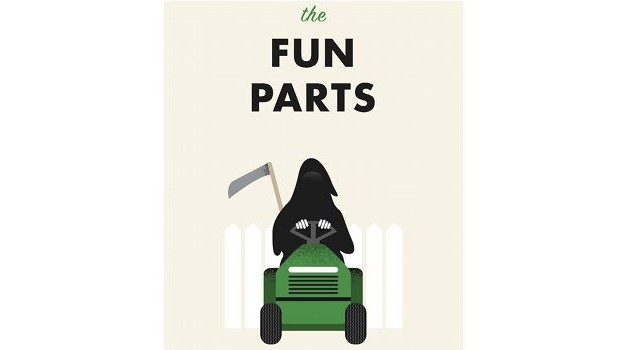 The Fun Parts by Sam Lipsyte

Blurb: A boy eats his way to self-discovery while another must battle the reality-brandishing monster preying on his fantasy realm. Meanwhile, an aerobics instructor, the daughter of a Holocaust survivor, makes the most shocking leap imaginable to save her soul. Bold, hilarious and darkly affecting, Lipsyte’s stories combine the tragicomic dazzle of his beloved novels and the compressed vitality of his classic debut collection. (Granta)

“When I read these stories, I came away with the impression that Sam Lipsyte’s modern America is a grim, malingering place full of nasty people. The infrastructure is recognisable but the psychic landscape is blasted and torn; it feels like the aftermath of a terrible event. When I read the stories again, I thought they were brilliant – by now, I could see that Lipsyte’s understanding of modern spite, rage and self-destruction is peerless. He drags you in.”

“Revelation, wisdom, inner peace — they come hard in Lipsyte’s world, if they come at all, which doesn’t keep these stories from being, as my sisters would say, “a hoot.” There’s only one underachiever in the bunch, the heavy-handed “Republic of Empathy,” but even subpar Lipsyte delivers plenty of funk, spunk and fizz. His portrayals of adolescence are pitch-perfect heartbreakers, especially the saga of high school shot-putters in “Ode to Oldcorn.” “Deniers,” which may be the best of this fine collection, features the 30-year-old Mandy, teacher of cardio ballet at the Manhattan Jewish Community Center and daughter of Jacob, a Holocaust survivor with a mean streak.”

“Sam Lipsyte’s hysterical prose is a bawdy objection to the pared-back austerity more typical of the current American scene. He spins out his lines at a breakneck clip, the riffs come thick and fast, and the gags are sprayed on with a machine gun. He is a detail-fiend, a maximalist, and he possesses an expansive linguistic imagination that can satisfy his leanings. Reading a Lipsyte story can feel like being collared and railed at in the street by a bearded, trembling and improbably erudite loon, and if you’re a reader like me, this can make for a whole lot of fun.”

“Lipsyte’s characters are often feckless, invariably deluded and they will typically end the story in an even worse place than the unappealing one where they started. But their stories are told with tenderness and a surprising compassion, rather than being just a launch pad for gags.”

“Yet although much of the humour derives from playfully subversive language, by regularly denying the characters meaningful interaction (and, concomitantly, entry into the adult world), Lipsyte risks fatuousness and falling foul of the same juvenility he takes for his subject. Perhaps it’s churlish to complain; Lipsyte’s writing is so biting, so inventive, you find yourself rereading whole paragraphs for the pleasure of it.”

“The dialogue constantly sparkles and unsettles, with strange seismic shifts going on beneath the surface of the prose. You won’t read finer sentences this year.”

“A lot of Mr. Lipsyte’s folk hero status among younger writers comes from a misapprehension. He can be easily mimicked, but he can’t be matched. He knows where to plant the shivs in a perfectly worded sentence, like “Tovah treated him to the smile she once bestowed upon the creative writing professor who told her that some people were meant to write poetry and others, like Tovah, were meant to treasure it.” What offsets the sweetness of “treated him,” “bestowed upon” and “treasure” is the way the very next sentence calls Tovah’s professor “that incontinent toad.” … All the stories in “The Fun Parts” feature dialogue that sharp. But their purposefulness varies wildly.’

“There are moments of black humour, but the manipulative sociopaths and self-pitying misanthropes start to feel interchangeable in their arrogance and cruelty. Aside from two vaguely fleshed-out female protagonists – a crack addict and a nursery worker who longs for a baby – Lipsyte’s female characters are mere window-dressing to the male anti-heroes’ struggles, slotted into the categories of dutiful wives, hated ex-wives, or simply “sluts”.”

The Fun Parts by Sam Lipsyte The Omnivore