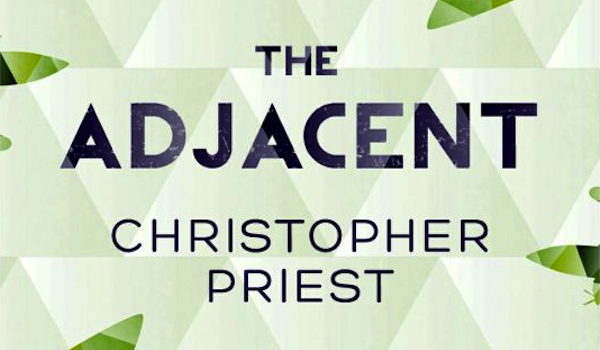 The Adjacent by Christopher Priest

Blurb: Tibor Tarent, a freelance photographer, is recalled to Britain from Anatolia where his wife Melanie has been killed by insurgent militia. IRGB is a nation living in the aftermath of a bizarre and terrifying terrorist atrocity – hundreds of thousands were wiped out when a vast triangle of west London was instantly annihilated. The authorities think the terrorist attack and the death of Tarent’s wife are somehow connected. A century earlier, a stage magician is sent to the Western Front on a secret mission to render British reconnaissance aircraft invisible to the enemy. On his journey to the trenches he meets the visionary who believes that this will be the war to end all wars. In 1943, a woman pilot from Poland tells a young RAF technician of her escape from the Nazis, and her desperate need to return home. In the present day, a theoretical physicist stands in his English garden and creates the first adjacency. (Gollancz)

“Each world cleverly resonates with the others through geography, names and human behaviour but this is no dry exercise: it’s an expertly paced, beautifully written exploration of the human condition that teases, fascinates and grips.”

“Priest has already shown a fascination with doppelgängers and stage conjuring in books such as The Prestige and The Separation. Here, in his usual measured grey style, the author re-explores those themes to impressive effect.”

“The intellectual engines of Priest’s banjaxing story are the many-worlds hypothesis and the idea of eternal recurrence. Through its emotional centre runs a sentimental love story with a whiff of Cocteau’s L’éternel retour. But the big reveal is that there isn’t a big reveal: symmetries are skewed. Nothing exactly adds up … I don’t know that all this completely comes off. The IRGB – which is never historicised, simply presented as a given, and has no obvious thematic significance – feels a little like it belongs in a satirical novel by Richard Littlejohn, and Priest’s prose and characterisation are pretty humdrum.”

The Adjacent by Christopher Priest The Omnivore