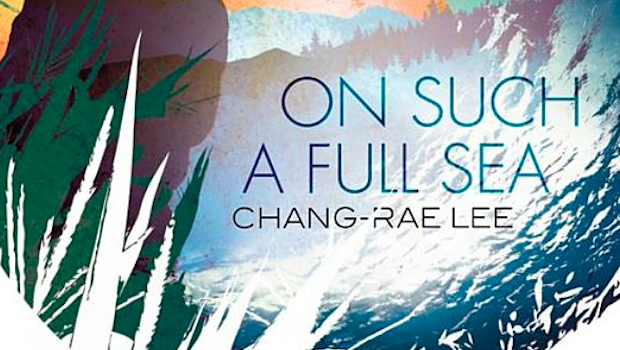 On Such a Full Sea by Chang-rae Lee

Blurb: Lithe and tiny, Fan is a diver at the New China settlement of B-Mor, a worker colony long-ago known as Baltimore, her circumscribed world the temperature-controlled fish tanks that feed a contaminated continent, and Reg, the golden-skinned, simple-hearted man she loves. Rigorously pressurised and demarcated, the dystopian America Fan serves is ruled by the professional Charter caste. While B-Mors are obedient and tranquillised by duty and the fear of chaos, the pampered, ruthless Charters inhabit idyllic, over-supplied communities behind whose gates they jostle ceaselessly for dominance. Estranged from nature, B-Mors and Charters alike shy from the spaces between, where ‘counties’ people – outcasts, free-thinkers and renegades, bandits and pedlars – forage and grub and steal and kill. One quiet day Reg is removed from the colony – whether for a nameless infraction, or because he is disease-resistant in a world where no one is C-free, it is impossible to say. Fan decides she must follow. But her departure threatens to disrupt the whole order of B-Mor society, and only savage action can hold it together. (Riverhead, January 2014)

“Faced with On Such a Full Sea, I have no choice but to ask: Who is a greater novelist than Chang-rae Lee today? His new, his fifth — where have you been? — book seals this deal. A chilling, dark, unsettling ride into a dystopia in utopia’s guise, this is a novel that might divide but will no doubt conquer where it matters most … In some ways this is Lee’s most trying work — reading “On Such a Full Sea” will weed out the skimmers, as its narrative is necessarily warped to a taxing inertia essential to its story. It is full of lyrical but densely bleak sentences…”

“On Such a Full Sea is a strange, skilful performance by a novelist who is brave enough to consistently subvert our expectations of narrative continuity. In Lee’s future, the past is opaque and Fan never stays long anywhere, leaving places and people behind as soon as they become familiar.”

“Lee’s most interesting choice is his narrator, the collective “we” of the B-Mor community, which changes the novel from an adventure story into a myth in the midst of creation … The price for this narrative choice is that Lee’s heroine remains a bit of a cipher, and some later sections of the novel suffer from longueurs as a result. But the payoff is a remarkable elasticity, allowing Lee to move from an omniscient bird’s-eye view to an intimate exploration of inner lives to wholly convincing fantasy.”

“There are bursts of lyricism – a stretch of sky “sings its chorus of light”; pollen has a “punky reek” – but for the most part the narration is distant and exposition-heavy, allowing Fan’s inner landscape to remain a mystery. Rather than political satire, or an absorbing thriller, the novel works best as a meditation on authorship, suggesting that all stories can be read as autobiographies.”

“Lee critiques how we live today – a defining feature of all dystopic fiction. Lee highlights the way, like the well-off characters in his novel, we are nanosecond-fixated with our various screens, religiously devoted to healthy foods and pharmaceutical regimes and terrified of illness and of outside threats to our security and comfort. And yet, like the collective narrator, we’re susceptible to stories of unexpected struggle and higher-order longings, and to people with that “special conviction of imagination”.”

“What a strange novel this is, with its erratic pacing, its haphazard mingling of adventure and philosophical reflection, its constant questioning of its own veracity. As Fan’s search progresses from one near-death escape to another, we begin to understand that we’re witnessing the creation of a legend: an unlikely heroine who answers the needs of a people suffocating under the ideals of self-sacrifice and stability … It’s a haunting critique of a spiritually stunted community kept satisfied with basic comforts and the promise of protection from a threatening world.”

“If formulations such as “Fan couldn’t help but recall” or “Fan couldn’t help but think” try to persuade us the narrators must be right – because these reported actions are the only ones possible – it’s hard not to raise an eyebrow when we’re told about an event Fan “never mentioned… to anyone”, or what she dreamt. Other obstacles to enjoyment are the number of coincidences – the way no one guesses Fan is pregnant before the end, the fanciful turn of phrase (“what activity offers more immediate, honest gratification than shining up a seemingly ruined surface back to the distinctive grain of its essence?” the narrators ask) and the fact that – for a quest narrative – it’s almost painfully zestless, despite bouts of intense action.”

“Like Cormac McCarthy and others, Lee uses essential elements of a serious genre irresponsibly, superficially. As a result, his imagined world carries little weight of reality. The whole system is too self-contradictory to serve as warning or satire, even if towards the end of the book the narrator begins to suspect its insubstantiality.”

“Windy philosophical musings lend this novel a decidedly lugubrious tone and hobble the story of Fan’s search for Reg. Plotting has not been Mr. Lee’s strong suit in novels like Native Speaker (1995) and Aloft, and here, Fan’s adventures devolve into a string of bizarre encounters with assorted weirdos and mercenaries … These encounters have no cumulative power and often feel like random episodes improvised on the fly to lend suspense to Fan’s story. And because Fan remains more of a symbol than a fully fashioned character, we have a hard time caring what happens to her, one way or the other.”