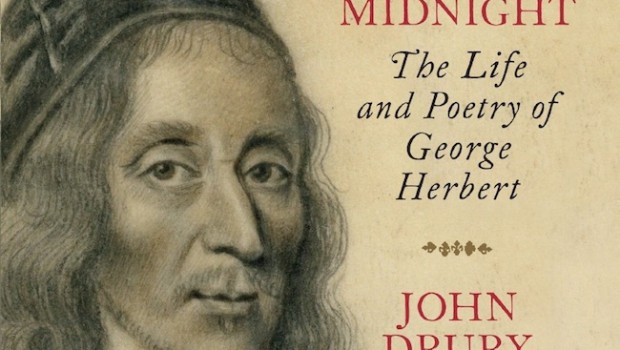 Music at Midnight: The Life and Poetry of George Herbert by John Drury

Blurb: For the first time, John Drury convincingly integrates the life and poetry of George Herbert, giving us in Music at Midnight the definitive biography of the man behind some of the most famous poems in the English Language.

George Herbert wrote, but never published, some of the very greatest English poetry, recording in an astonishing variety of forms his inner experiences of grief, recovery, hope, despair, anger, fulfilment and – above all else – love.

He was born in 1593 and died at the age of 39 in 1633, before the clouds of civil war gathered, his family aristocratic and his upbringing privileged. He showed worldly ambition and seemed sure of high public office and a career at court, but then for a time ‘lost himself in a humble way’, devoting himself to the restoration of the church at Leighton Bromswold in Buckinghamshire and then to his parish of Bemerton, three miles from Salisbury, whose cathedral music he called ‘my heaven on earth’. When in the year of his death his friend Nicholas Ferrar, leader of the quasi-monastic community at Little Gidding, published Herbert’s poems under the title The Temple, his fame was quickly established.

Because he published no English poems during his lifetime, and dating most of them exactly is impossible, writing Herbert’s biography is an unusual challenge. In this book John Drury sets the poetry in the whole context of the poet’s life and times, so that the reader can understand the frame of mind and kind of society which produced it, and depth can be added to the narrative of Herbert’s life. (T.S. Eliot: ‘What we can confidently believe is that every poem in the book [The Temple] is in tune to the poet’s experience.’) His Herbert is not the saintly figure who has come down to us from John Aubrey, but a man torn for much of his life between worldly ambition and the spiritual life shown to us so clearly through his writings. The result is the most satisfying biography of this exceptional English poet yet written.

JOHN DRURY is Chaplain and Fellow of All Souls College, Oxford. He began as a biblical scholar, and while Dean of King’s College, Cambridge, worked with Frank Kermode on the Gospels for The Literary Guide to the Bible, which sharpened his sense of the role of imagination in the formation of the Gospel stories. He took this interest further, and into the realm of Christian paintings and their meaning, in Painting the Word, written while he was Dean of Christ Church, Oxford. Music at Midnight is the culmination of a lifetime’s interest in Herbert, whose Complete Poetry he is now editing for Penguin Classics.

“Where Drury most convinces is in showing that Herbert was just as complex and adroit as Donne. His book is really a series of close readings under the guise of a new biography: historically it adds little that is new; critically, it is a dazzling production. Drury is excellent on the effects of metre and on Herbert’s cunning word play.”

“Thanks to John Drury’s excellent new book, modern sensibilities may rediscover in Herbert’s homely imagery and laconic language an aesthetic which chimes with our own … it’s in the analysis of the poems that Drury excels … a terrific book”

“Drury manages wonderfully in bringing text and context profitably together. His book is especially valuable, and enjoyable, in its deft and insightful expositions of Herbert’s formal and stylistic brilliance; how the manner of Herbert’s poems – their verse forms, metre, syntax, diction and verbal patterning – enhance and intensify the matter: the complaints and praises, yearning and disappointments, griefs and joys. My only wish is that the book had taken some account of Adele Davidson’s recent contention that verbal game-playing in The Temple, the acrostics, anagrams, pattern poems and so on, goes much further than previously thought.”

“John Drury’s excellent book is a fine guide and companion … His attitude to Herbert the poet is one of inexhaustible wonder and inquiry, while to the man who died at 39 he is almost father-like, tender and humane. Music at Midnight should not cause readers or students to neglect Amy Charles’s Life of George Herbert (1977), but no one interested in this writer should be without it.”

“…this book is both deeply knowledgeable and deeply felt. It overflows with the poetry, revelling in its “lightness” and “alacrity”; that is how it should be, for Herbert’s inner life is indescribable in any other form. The poetry is dissected, both for meaning and, as vitally, for metre, as much as it needs to be for 21st-century readers.”

“This biography is measured and musical … Drury has a well-tuned ear for Herbert’s rhythms, leavening his biographical narrative with metrical analysis of a kind that is rarely seen in literary criticism today … it is doubtful that Drury’s affectionate portrait will win him many new fans, though it will delight all who love his poetry.”

“Drury structures his book around the poems, many of which he includes, making this an anthology with commentary as much as a Life. This makes sense; while the poems that make up The Temple are not datable, nor in an order selected by Herbert, and while not biographically revealing in a modern sense, they surely give an impression of his personality … Given Drury’s material, this book could never have been a lively Life. But it is powerfully absorbing.”

“The strength of Music at Midnight is Drury’s close textual analysis and in this regard he’s a better guide to the poetry than some literary critics, at least the ones who forget the virtues of keeping it clear and simple … At times the structure is a little awkward to assimilate from the reader’s point of view, yet forgiveable when taken as the hazard not only of marrying the scholarly with the commercial but also drawing the life out of the poetry, particularly when exact dates of poetical composition are hard to come by.”

“…the central paradox of Herbert’s poetry, as of all holy striving, is his consciousness that there is fundamentally nothing to be done; all our business, including the “quaint words and trim invention” of subtle poems, is but a means of endless evasion. What is really required of us is the non-action of letting go … This is a dangerous doctrine, of course. John Drury’s reading of Herbert in this timely new study is a milder one, focusing on the poet’s “arch-topic”: love … an unusual life-cum-exegesis with the lightness and clarity that were, for Herbert, cardinal virtues.”

“Pleasantly old-fashioned … Drury nods occasionally towards that robust Jacobean Protestantism — an intelligent amalgam of radical doctrine with formalist instincts — so richly researched by Patrick Collinson and subsequent historians. But mostly he clings to a rather bland view of what he anachronistically calls ‘Jacobean Anglicanism’, to which Calvinism is as antipathetic as popery. It will be interesting to see how his forthcoming Penguin edition deals with Hebert’s poem ‘The Waterfall’ (not mentioned here) with its uncompromising recitation of double predestination. The same reluctance to look hard or afresh dulls Drury’s dutiful treatment of Herbert’s poetry.”

Music at Midnight: The Life and Poetry of George Herbert by John Drury The Omnivore