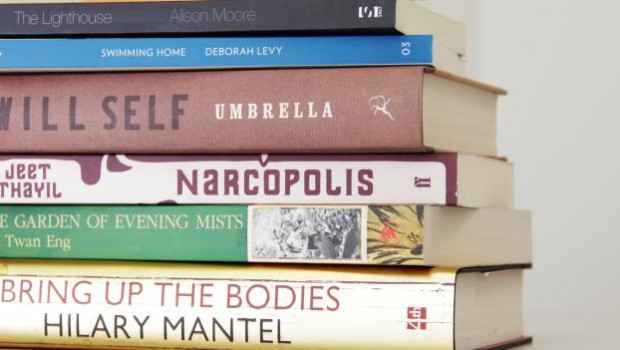 WINNER: Bring up the Bodies by Hilary Mantel

The Garden of Evening Mists by Tan Twan Eng

It’s Malaya, 1949. After studying law at Cambrige and time spent helping to prosecute Japanese war criminals, Yun Ling Teoh, herself the scarred lone survivor of a brutal Japanese wartime camp, seeks solace among the jungle fringed plantations of Northern Malaya where she grew up as a child. There she discovers Yugiri, the only Japanese garden in Malaya, and its owner and creator, the enigmatic Aritomo, exiled former gardener of the Emperor of Japan.

Swimming Home is a subversive page-turner, a merciless gaze at the insidious harm that depression can have on apparently stable, well-turned-out people. Set in a summer villa, the story is tautly structured, taking place over a single week in which a group of beautiful, flawed tourists in the French Riviera come loose at the seams. Swimming Home represents a new direction for a major writer. In this book, the wildness and the danger are all the more powerful for resting just beneath the surface.

The Lighthouse begins on a North Sea ferry, on whose blustery outer deck stands Futh, a middle-aged, recently separated man heading to Germany for a restorative walking holiday. Spending his first night in Hellhaus at a small, family-run hotel, he finds the landlady hospitable but is troubled by an encounter with an inexplicably hostile barman. In the morning, Futh puts the episode behind him and sets out on his week-long circular walk along the Rhine.

Recently having abandoned his RD Laing-influenced experiment in running a therapeutic community – the so-called Concept House in Willesden – maverick psychiatrist Zack Busner arrives at Friern Hospital, a vast Victorian mental asylum in North London, under a professional and a marital cloud. He has every intention of avoiding controversy, but then he encounters Audrey Dearth, a working-class girl from Fulham born in 1890 who has been immured in Friern for decades.

Wait now, light me up so we do this right, yes, hold me steady to the lamp, hold it, hold, good, a slow pull to start with, to draw the smoke low into the lungs, yes, oh my… Shuklaji Street, in Old Bombay. In Rashid’s opium room the air is thick with voices and ghosts: Hindu, Muslim, Christian. A young woman holds a long-stemmed pipe over a flame, her hair falling across her eyes. Men sprawl and mutter in the gloom. Here, they say you introduce only your worst enemy to opium.