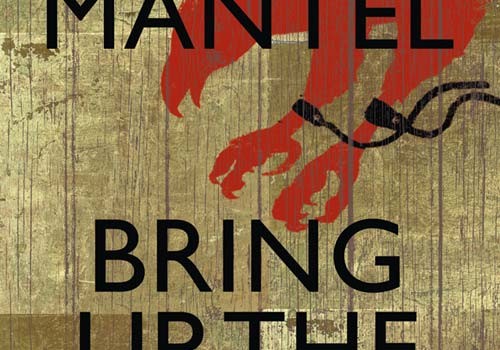 Bring Up the Bodies by Hilary Mantel

Blurb: By 1535 Thomas Cromwell, the blacksmith’s son, is far from his humble origins. Chief Minister to Henry VIII, his fortunes have risen with those of Anne Boleyn, Henry’s second wife, for whose sake Henry has broken with Rome and created his own church. But Henry’s actions have forced England into dangerous isolation, and Anne has failed to do what she promised: bear a son to secure the Tudor line. When Henry visits Wolf Hall, Cromwell watches as Henry falls in love with the silent, plain Jane Seymour. The minister sees what is at stake: not just the king’s pleasure, but the safety of the nation. As he eases a way through the sexual politics of the court, its miasma of gossip, he must negotiate a ‘truth’ that will satisfy Henry and secure his own career. But neither minister nor king will emerge undamaged from the bloody theatre of Anne’s final days. (Fourth Estate)

“It [Wolf Hall] was a hard act to follow. But the follow-up is equally sublime. In answer to what will surely be everyone’s first question about Ms. Mantel’s Bring Up the Bodies: Yes, you can read it cold. Knowledge of Wolf Hall is not a prerequisite to appreciating what Bring Up the Bodies describes, because Ms. Mantel sets up her new book so gracefully. All of Cromwell’s scheming to expedite Henry VIII’s casting off of his first wife, Katherine of Aragon, to marry Anne Boleyn is behind him. So is the schism with the Roman Catholic Church that the first book so thoroughly outlined, maneuver by crafty manoeuvre.”

““You cannot make my thoughts a crime,” protests a nobleman who admits to amorous feelings for Anne but denies acting on them. The Stalinist cadences of Master Secretary Cromwell’s title reverberate in his reply: “If thoughts are intentions, if intentions are malign. . . .” Mantel allusively links Tudor absolutism to 20th-century totalitarianism, showing Cromwell as the reluctant but resolute instrument of authority that defines guilt to serve its own purposes … The reader’s problem, deliberately created by Mantel, is that we know Cromwell too intimately to hate him for his terrible deeds. We understand the stark imperative that drives him: Satisfy the king or be thrown to the aristocratic wolves. ”

“While Mantel gives us the events as Cromwell sees them, the reader is asked to see Cromwell as Mantel sees him: not the cold-eyed bureaucrat of Holbein’s portrait or the ruthless Terminator of the Tudor age but as worldly, unsentimental, melancholic, and brilliantly in tune with his time, just as he would be brilliantly in tune with our own. Analogies have been made with Stalin’s chief of secret police and the Inner party member O’Brien in Orwell’s 1984, but Cromwell’s stocky person moves through these pages more like that of a mobster. Mantel’s Cromwell is a sex symbol: the kind of man women want to have and men want to be.”

“Amid all the cruelty and violence, the comings and goings of ambassadors and worries about war, Mantel’s supreme skill is to allow time for the childish and the absurd. Her people are more often ridiculous than heroic, and she explains why. The most venal among them fascinate us just as they obsess Cromwell. She has us just where she wants us … This is a great novel of dark and dirty passions, public and private. It is also an exploration of what still shocks us – statecraft reduced to a barometer of the king’s libido”

“In her historical fiction, the rubble of research is ground to a dust so fine that it settles into every phrase, every glance and gesture, so that we seem really to see through eyes that opened on the late 15th century. In Bring Up the Bodies an afternoon moon is ‘mean as a clipped coin’; Cromwell’s cook looks at a ball of dough ‘as if it were the head of the Baptist’. She excels at using what we know to show us what we can’t imagine.”

“Some have criticised Mantel for drawing female characters more finely, and critically, than men. Perhaps. But given that the literature and portraits of the day (Holbein aside) rarely seem to penetrate beyond a superficial idea of what it is to be a woman – as if artists and authors could never quite dispel the damning miasma of the curse of Eve – it is a welcome thing to have the wives of Henry here in sharp focus. In the Tudor age popular theology described women as an affront to the very nature of God himself. The sin of our sex led many, like Anne, to be damned as whores and eradicated. This book brings back many bodies.”

“Boleyn’s fate is well known but Mantel’s elegant novel explores the nature of power and wealth, honesty and authenticity with potent contemporary resonances.”

“Bring Up the Bodies – every inch as well wrought and serenely written as its predecessor – is, like Wolf Hall, a map of Cromwell’s hinterland. Every impression on his taut, responsive inner life is recorded. It is hard to overstate the skill with which Hilary Mantel drives her story through what is, essentially, a series of business meetings … Great historical novels do not just recreate a period but instruct us about the nature of history, its movement and its myths. The Tudors are fertile territory because it is here that the conception of the bureaucratic state we know today.”

“The court’s – and Mantel’s – skill at verbal chicanery comes darkly into force. Like its predecessor, the novel is rich in its descriptive immediacy, but it is the dialogue which propels it. Graven with Diamonds, Nicola Shulman’s recent biography of the pre-eminent poet of the era, Thomas Wyatt (temporarily arrested as one of Anne’s paramours) neatly delineates how a person could live or die by the interpretation of a single word. ”

“Although it has the same cast, the same tense and takes up in 1535 more or less where Wolf Hall left off, it is lively and full of narrative suspense, as its predecessor was not … What makes Bring Up the Bodies so different from its predecessor? I think it’s the emotional intelligence with which Henry, Boleyn, Crom­well and the rest are depicted as characters we can feel for, as opposed to just know about … Instead of repeatedly telling us how clever Cromwell is (as she did in Wolf Hall), Mantel shows us.”

“Wolf Hall [is] a hard act to follow, but in her new novel Mantel rises to the challenge with marvellous confidence. This is despite (or because of) one fundamental difference between Bring Up The Bodies and its predecessor.In Wolf Hall the canvas was enormous: the first part of the book dealing with Cromwell’s childhood and early life, the later part with his role in Henry’s marriage to Katherine of Aragon, and the downfall of Thomas More. Here the sphere of interest is much tighter, as Mantel concentrates on Henry’s desperate longing for a male heir, on the pregnancy of his second wife Anne Boleyn, on her miscarriage and on Cromwell’s conspiracy (backed of course by Henry) to do away with her.”

“Mantel’s prose is even more mellifluous here than in Wolf Hall. There is a subdued coupling of assonances and alliterations which is established on the opening page, with the “sigh and riffle of pinion” of Cromwell’s birds of prey, going on to describe the “flittering, flinching” universe the birds (and, indeed, Cromwell) see … Part of the accomplishment of Mantel’s novel stems from its being historical fiction. Historical fiction, by definition, lacks a degree of narrative surprise. Mantel circumvents this problem in a number of ways. The narrative is intensely focalised through Cromwell himself and the shimmering variability of his particular stream of consciousness. The decision to write in the present tense adds both impetus and the unknown. ”

“The ambiguous Cromwell is a character who fits Mantel’s particular strengths. She’s never gone for the sweet people, and is no stranger to dark purposes. Beginning with smaller canvases – novels set in present-day England – she moved to widescreen historical fiction with the masterful A Place of Greater Safety (1992), featuring the major actors of the French revolution as well as a large supporting cast and its twisted interactions. She relies on the same talent for intricacy in Wolf Hall and Bring Up the Bodies. There are a lot of people lurking around in Henry’s court, all of them on the make or trying to sidestep the axe, and helping the reader keep track of them is a special craft.”

“If you want to know what novelistic intelligence is, you might compare a page or two of Hilary Mantel’s work with worthy historical fiction by contemporary writers such as Peter Ackroyd or Susan Sontag. They are intelligent, but they are not novelistically intelligent. They copy the motions but rarely inhabit the movement of vitality. Mantel knows what to select, how to make her scenes vivid, how to kindle her characters. She seems almost incapable of abstraction or fraudulence; she instinctively grabs for the reachably real … Bring Up the Bodies lolls a bit in its midsection (and perhaps suffers merely on account of coming after the extraordinary freshness of Wolf Hall), but becomes menacingly narrow in its last third, as Thomas Cromwell dresses his victims in careful accusation.”

“The novel has flashes and sequences of great power through the austere limitations of its own technique and the range of its own interests. It is bold never to tell the reader what a room looks like, and only to say what clothes someone is wearing when it seems to mean something specific, such as Anne’s yellow dress at Katherine’s death. It is still bolder, I think, not to let the characters establish themselves through different ways of speaking or by characteristic and memorable gestures. Sometimes Mantel pays a certain price for this: though some members of the dramatis personae are vividly memorable, such as Wyatt, Lady Rochford and the fascinating Cromwell himself, others slide by.”

Diane Purkiss, The Independent on Sunday

“In this, her sequel to Wolf Hall, she has no truck with the feminised Tudor history denounced by David Starkey, but sticks firmly to her agenda – male point-of-view, Cromwell’s point-of-view, a political point-of-view, with no lust in the Tudor shrubbery. Her historical fiction might be called the squeezed middlebrow, refusing bodice-ripping bestseller-land, but also rejecting wildly experimental writers of historical fiction like Orhan Pamuk. As all historical novelists must, Mantel forces us to recognise ourselves in people whose different minds could easily alienate us. Her Cromwell is practical, as we are, a battler, as we are, with no religion or love of the monarch, because we have none.”

“In the course of more than 1,000 pages, Mantel appears to have been seduced by her central subject — so seduced, in fact, that Bring Up the Bodies feels at times like a long and elaborate case for the defence. Great swathes of text are devoted to Cromwell’s idyllic domestic life, his ­generosity, his admirably far-sighted plans for the country. The result is that, instead of being explained, he is often excused, and remains as unknowable as the “sleek, plump and densely inaccessible” man Mantel mentions coyly in her author’s note. ”