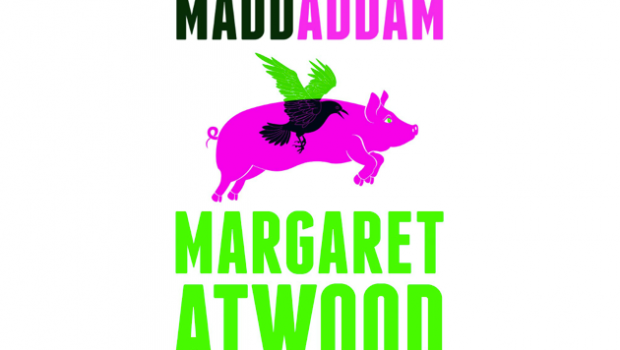 Blurb: A man-made plague has swept the earth, but a small group survives, along with the green-eyed Crakers – a gentle species bio-engineered to replace humans. Toby, onetime member of the God’s Gardeners and expert in mushrooms and bees, is still in love with street-smart Zeb, who has an interesting past. The Crakers’ reluctant prophet, Snowman-the-Jimmy, is hallucinating; Amanda is in shock from a Painballer assault; and Ivory Bill yearns for the provocative Swift Fox, who is flirting with Zeb. Meanwhile, giant Pigoons and malevolent Painballers threaten to attack. (Bloomsbury)

“Margaret Atwood not only completes one of the most harrowing visions of a near-future dystopia in recent fiction, but lures us even further into new zones of existential terror. Like a Bosch triptych, hers is a world of almost unbearably frightening possibilities, from death by pigoon(huge, genetically modified pigs whose human brain component makes them increasingly cunning predators), through a wide range of similarly ingenious transgenic products (none of which bear the least resemblance to Dolly the Sheep), to capture by the Painballers, dehumanised former convicts whose modus operandi begins with vicious sexual torture and ends in cannibalism.”

“Atwood has always been a writer of virtuoso diversity, with an imagination that responds as keenly to scientific concerns as it does to the literary heritage in which she is steeped. In MaddAddam, cutting-edge science combines with reshapings of motifs from earlier fiction. The pigs of Animal Farm are discernible behind the novel’s sharp-witted porkers. Brave New World has also contributed considerably, right down to the eagerness to dope on BlyssPluss pills. HG Wells’s influence shows in the Crakers, with their resemblance to the beautiful, defenceless Eloi of The Time Machine.”

“Like its predecessors, MaddAddam is as much a story of adolescent longing and disappointment as it is of life before and after the Waterless Flood. In Atwood’s world, hearts broken early in life don’t heal; the larger strokes of politics and plague are less important to these books than the small hurts and jealousies of its survivors … Atwood’s prose miraculously balances humor, outrage and beauty.”

“MaddAddam’s twin voices – Zeb’s and Toby’s – are as compelling as their characters are complex. Atwood depicts them both through their own and each other’s eyes. In his brother Zeb’s telling, Adam One transcends his role in The Year of the Flood, becoming a linchpin of the complicated plot. Toby too acquires added richness. But Atwood’s single most telling strategy is the inclusion at the heart of the tale of the Crakers, and in particular, of Bluebeard, the gentle, reflective, inquiring boy-Craker taught by Toby to read and write English.”

“Told in simple prose, these sections are moving, but also very funny. Atwood is not always praised as a comic writer, but MaddAddam reveals a fondness for bad puns (Occam’s razor becomes “Ock-ham” during a swinish encounter), off-beat one-liners (“I once had a conversation with my bra”) and some inventive running gags.”

“While it can’t really be gainsaid that she gives us stock characters (the feisty but self-doubting heroine, the all-action hero with a troubled past and commitment issues) and situations (at times we could be in a Western, mutatis mutandis), she is perpetually alive to the ambiguities and contradictions unearthed by those situations and characters. She is pretty solid on the science, so far as one can tell. In an afterword she declares that nothing depicted in the books isn’t happening now or couldn’t happen soon; she has fitted Maddaddam with a few extra Zeitgeist-ticklers such as drones, social media and fracking.”

“Behind the apparent disorder Atwood the conjuror remains in firm control, juggling her narrative techniques with postmodern glee. Since she is describing an exploding universe of mutants, gene-splicing and scientific experiments gone haywire, her narrative is similarly fractured, split, its modes eclectic. It zigzags between first-person reminiscence, old-fashioned rom-com, Craker-talk, IT-speak, the euphemistic drivel of religious hypocrites, the staccato, lying utterances of adpersons. At some times we seem to be witnessing a mythical quest, at others a buddy movie.”

“Though Atwood’s trilogy might be read as allegory, it is anchored throughout by her keen eye for detail: her blasted planet is both a symbol of environmental collapse and a vividly imagined landscape in which derelict buildings are “invaded by the probing green snoutlets of vines”. But MaddAddam ultimately provides a hopeful ending to the saga, with the last humans finding redemption in the act of storytelling.”

“The best literary SF, such as Cormac McCarthy’s The Road, or Atwood’s own patriarchal dystopia The Handmaid’s Tale, manages to solve these problems. But this time round, I fear, Atwood has preserved the disadvantages, while failing to capitalise on some of the genre’s advantages: namely, its ingenuity, and its fast-moving plots. What saves the trilogy is its complexity, its tough-minded satire, and its strangeness.MaddAddam is a wild ride.”

“Like its predecessor, this last volume never quite succeeds in establishing its world as something more than an authorial toy, while Atwood’s clear interest in the interiority of her characters is persistently undercut by the parodic demands she places on the setting. What began in Oryx and Crake as excruciating black comedy is now dulled to a kind of invasive jocularity, and the barbs at current affairs are getting less and less subtle.”

“Realising her comic vision places Atwood under a lot of tonal restrictions — it requires her to be glib and amoral, for example — and these make it hard for her to switch to a more naturalistic mode in scenes which call for depth of characterisation.”

“There are some wonderful, lyrical passages, particularly about bees, and there are some very good jokes. The book is written with admirable energy and bravura, but at the same time there is a nagging sense that what is supposed to be a richly imagined dystopia is, in fact, a rather overburdened and undisciplined indulgence.”

MaddAddam by Margaret Atwood The Omnivore