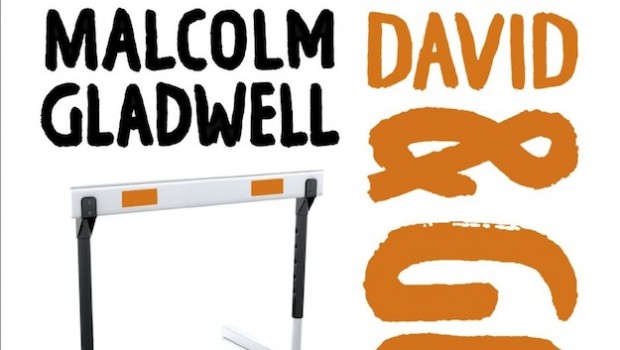 David & Goliath: Underdogs, Misfits and the Art of Battling by Malcolm Gladwell

Blurb: Why do underdogs succeed so much more than we expect? How do the weak outsmart the strong? In David and Goliath Malcolm Gladwell takes us on a scintillating and surprising journey through the hidden dynamics that shape the balance of power between the small and the mighty.

From the conflicts in Northern Ireland, through the tactics of civil rights leaders and the problem of privilege, Gladwell demonstrates how we misunderstand the true meaning of advantage and disadvantage. When does a traumatic childhood work in someone’s favour? How can a disability leave someone better off? And do you really want your child to go to the best school he or she can get into?

David and Goliath draws on the stories of remarkable underdogs, history, science, psychology and on Malcolm Gladwell’s unparalleled ability to make the connections others miss. It’s a brilliant, illuminating book that overturns conventional thinking about power and advantage.

Malcolm Gladwell is a staff writer for The New Yorker magazine, and author of The Tipping Point, Blink, Outliers, and What The Dog Saw.

Malcolm Gladwell: ‘If my books appear oversimplified, then you shouldn’t read them’ | Interview with Oliver Burkeman, The Guardian

“Gladwell’s most enjoyable book so far. It is a feel-good extravaganza, nourishing both heart and mind … to err on the side of simplicity mainly makes the book more, rather than less, intelligent. It is a sign that he has done the hard work so that the reader doesn’t have to do a thing. And this time – hallelujah – all points are made without the help of any pop-neurology. There’s not a frontal lobe in sight.”

“Gladwell occasionally struggles to allow his stories to speak for themselves (“The Mennonites believe in the inverted-U curve,” he alleges) but, for the most part, the data and jargon, the talk of “relative deprivation” and “affective forecasting”, are there to enable his books’ essential human interest — to help explain, in this case, why Londoners felt elated during the Blitz, say, or how a duplicitous dyslexic became the CEO of Goldman Sachs.”

“At one point, he examines the psychology of the Blitz spirit. The intention of the Luftwaffe bombing campaign was to destroy the resolve of Londoners; its effect was exactly the opposite. In fact, the Nazis would probably have had more success in this aim had they not dropped a bomb at all. The reason for this? The fear of bombardment is far more psychologically disturbing than the survival of it. Despite the casualties – or rather because of them – those who survived the daily random assault commonly developed a sense of invincibility, one that only grew with every near miss. Like most of this book, that idea is not, if you stop and think, so surprising. The great pleasure of it is having Gladwell do the stopping and thinking for you.”

“David and Goliath lacks the sharp point of The Tipping Point. But surprisingly, I didn’t terribly mind. If you read this book as a comprehensive ­theory of the underdog, you will be disappointed. But treat it as a series of intriguing ideas, and tales of humans battling against the odds, and you will feel strangely uplifted and hungry for the next, slightly random conversation.”

“Malcolm Gladwell’s best writing in the past has taken general trends – often identified by path-breaking research in the social sciences – and then used personal stories to illuminate them. He did that brilliantly in Outliers. In this book he goes down the alternative route of taking personal stories and then trying to hang general lessons on them. It is both more conventional and less convincing. Too often Gladwell seems to be mythologising his subjects. He treats their unusual individual histories as morality tales.”

“As usual, Mr. Gladwell’s science is convenient. He has charts to back up his premise about academic success, but how is success measured? In happiness? Salary? Getting jobs, or keeping them? Read the annotations if you must, but they won’t get you far. Mr. Gladwell needs a David-Goliath school story, so he creates one. His version happens to have common sense on its side, even if it is in no way definitive or complete.”

David & Goliath: Underdogs, Misfits and the Art of Battling by Malcolm Gladwell The Omnivore