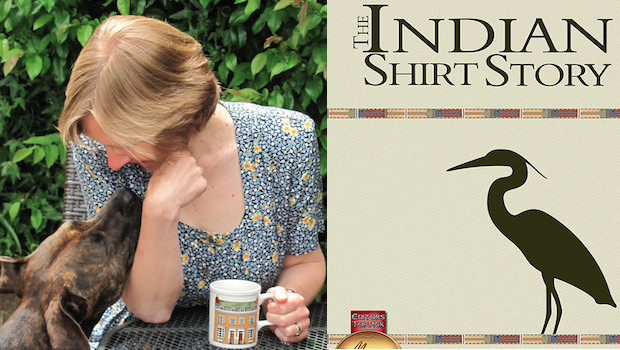 Seattle-based Heather Lockman was inspired to write her first novel after uncovering a troubling story about the Old West pioneer homestead she was helping to turn into a museum. She describes the result, The Indian Shirt Story, as “part love story, part modern satire, and part historical saga.”

Tell us a bit about yourself..
I was born and raised in Seattle, in the coastal forest-and-mountain country of the American Pacific Northwest. Except for youthful stints in London and Alaska I’ve lived in this part of the world my whole life. I’m a full-time professional writer. Up to now I’ve written nonfiction — history mostly, in one way or another. Books, articles, museum exhibits, short documentary videos, interpretive signs and historical markers. I’m one of the rare writers who has literally seen her words cast in bronze. I also write a quirky little history blog for fun. The Indian Shirt Story is my first novel.

What’s your book about?
It’s not an easy novel to categorise. I usually end up describing it as part love story, part modern satire, and part historical saga. The plot involves a brew pub, a historic house, trouble with the local American Indian community, and the unexpected arrival in the politically leftist American Northwest of the biggest country music star ever to come out of Nashville. There’s a lot of cultural conflict. The humour is sharp but it’s never unkind. I have a genuine fondness for all the characters — even the ones who would drive me mad if I met them in real life.

I think of The Indian Shirt Story as mainstream fiction, my agent calls it women’s fiction, and my publisher is marketing it as literary/contemporary. It also pops up periodically in the Top 100 “Native American” titles on Amazon. Portland Book Review calls it “charming, lovely, funny and sad,” which is pretty much where I was aiming.

Where did you get the idea for your novel?
I once spent two years helping to launch a house museum in the town where I live — an Old West pioneer homestead from the days of the Oregon Trail. There was a certain family story attached to the site that was a particular problem for us because of its ghastly portrayal of American Indian people. But it was an important story to the older generation of the family and likely contained some small kernel of truth. All of that got me thinking: What really took place here back in the 1850s? And what might the Native version of that same story have been? So that’s how it started. The salmon, the beer, and the country music came later.

What attracted you to Musa Publishing, a digital-only small press?
I hesitated before accepting the contract from Musa. Literary readers have been notoriously slow to embrace digital publishing, and I knew I would to have to sell my readers on a whole new kind of technology before I could sell them an ebook. But traditional publishing has changed a lot, too. It’s harder than ever these days for an unknown writer to get noticed by a major publisher, especially with mainstream fiction. A small digital-only press, freed from the staggering expense of printing, warehousing, and shipping print copies, can afford to take a chance on a hard-to-pigeonhole debut novel. Musa said, “Yes, we love this book.” And eventually I said yes, too.

Imagine your ideal readers: which authors do they enjoy?
They love Charles Dickens, Richard Russo, and Nick Hornby. Doesn’t everyone?

If you had to sum up your book in a Hollywood pitch, how would you describe it?
In America, I’d say Barbara Kingsolver meets Sherman Alexie — though one of my readers suggested Tim McGraw meets Sacajawea. In the UK it’s probably more like White Teeth meets Barbara Pym.