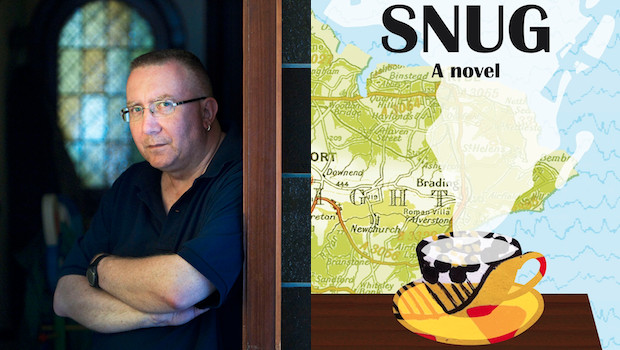 Matthew Tree is a well known author in his adopted homeland of Catalonia. Snug — a provocative and darkly funny indictment of racism in contemporary Britain — is his first published work in English. Already popular with book groups in Catalonia, Snug has been praised by journalist and fellow honorary Catalan, Matthew Parris.

Tell us a bit about yourself…
I was born in London at the tail end of 1958. After having tried to give up writing in my late teens, I realised at 20 that I would have to keep on doing it, even though I kept coming across stumbling blocks with my mother tongue – British English – that made it difficult to find my written voice. Circumstances led to me teaching myself Catalan at age 19, and several years later, when I had moved to Barcelona, I got a chance to publish a text written in Catalan. Finding that I had no stumbling blocks with that language, I went on to write two novels, a collection of stories, an autobiography, a road book and several non-fiction books, all in Catalan and all published. Ideas started coming back to me in English around about 2003, and six years later finally gelled in a new English-language novel, called Snug. When working on it, I discovered that my old stumbling blocks with English had finally been hurdled.

What’s Snug about?
A tiny village on the south coast of the Isle of Wight finds itself besieged by Africans who have gone there for that very purpose. The events are related by a 12 year old boy, a 14 year old girl, her racist father and the Africans’ infiltrator in the village. As for the ‘subject’, the book is about teenage love, racism, colonialism and how the complacency and self-satisfaction of many white British people can easily turn into (violent) arrogance.

Can you tell us more about the title?
The villagers in Snug think and behave as if everything was safe, cosily British and more or less untouchable and unchangeable. When things start to change radically, their village stops being so very snug, and becomes quite the opposite.

Where did you get the idea for “Snug”?
Some of it is based on a short story I wrote when I was twenty, in which I imagined that Africans from the colonised nations had finally had enough of not being in control of their own destinies, and decided to descend on England in every kind of vessel available, kalashnikovs strapped to their backs. Another source would be John Carpenter’s Assault On Precinct 13 and a few other siege films. Yet another would be the images seen over the years of Africans risking their lives to arrive, barely alive, on European shores. Many of them, of course, don’t make it. There are photographs taken in the early 2000s of tourists in southern Spain and southern Italy, sitting happily on the beach within spitting distance of washed up African corpses: an early scene in Snug is based on such pictures.

Imagine your ideal reader: which authors do they enjoy?
The same ones I do, without that implying that I resemble them in any way: Henry Miller, William Burroughs, Bohumil Hrabal, Thomas Bernhard, James Ellroy, and a fantastic Catalan language writer called Quim Monzó (available in English). And there are many more, it goes without saying. What do all these authors have in common? They all do something different, they are all naturally original. I write for everybody over fourteen – or that’s the readership I visualise, at least – but find that the readers who really take to SNUG (and other books) tend to be people who like something out of the ordinary.

If you had to sum up your book in a “Hollywood pitch”, how would you describe it?
Moonrise Kingdom meets Assault on Precinct 13. Or, if we want to keep it literary: Lord of the Flies meets just about any title by Ngugi Wa Thiong’O.