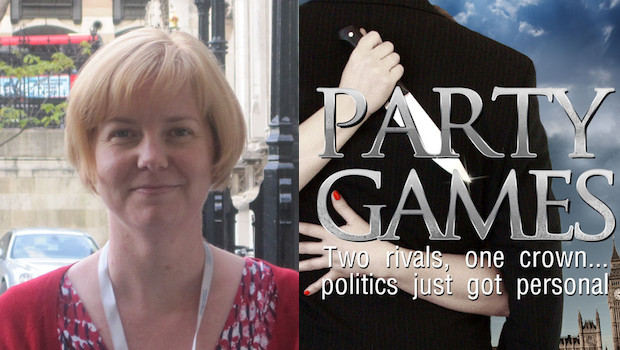 When Westminster insider E.J. Greenway, aka Emma Gray, heard herself saying “You couldn’t make it up” once too often, she decided it was time to turn her personal experience of opposition politics into a novel. If you enjoyed the recent BBC drama The Politician’s Wife then you’ll love Party Games, a dark and shocking tale of Machiavellian intrigue among Tory high-fliers.

I have worked in Parliament for twelve years, having graduated from Leeds University in 2001. I always loved writing, and penned my first ‘political thriller’ at the age of 11 in which I plotted to kill the Prime Minister with poisoned punch. Party Games is my first serious attempt at a novel, and since I self-published I have written articles on political fiction and personality in politics for various online publications.

The first of a trilogy, I have set Party Games amongst a bunch of ambitious Tory MPs in Opposition. The Opposition Leader, Rodney Richmond, suffers from a huge thorn in his side – his scheming, manipulative and vengeful deputy, Colin Scott, who sets out to destroy him. The book centres around Richmond and Scott’s fractious relationship and its consequences for their colleagues, friends, lovers and – of course – themselves, with an ending I hope will leave the reader shocked and wanting more.

I have two main characters:

Rodney Richmond is smooth, charismatic and good-looking, but it’s not enough to stop the civil war erupting around him in the Conservative Party. His suave exterior betrays his inner self-doubt and loneliness, unable to hold down a relationship or win the heart of his unrequited love. As his enemies move in for the kill, he is left vulnerable and in more danger than he realises.

Colin Scott, Richmond’s nemesis, is bitter after losing to Richmond in the leadership election, set just before the book begins. He is haunted by guilt and grief having lost his first love in a car crash while at university and enjoys a relationship with a student 26 years his junior -  a relationship which he tries desperately to keep secret. He plots revenge against Richmond, but his own demons threaten to consume him.

Much of my early years in Parliament were spent observing life in Opposition.  Although set in the murky world of Westminster politics, the essence of the novel is human nature and how people react to the pressure-cooker world of hierarchy and ambition. There is little political fiction written exclusively about Opposition, but having seen first-hand what a gossipy, navel-gazing environment Opposition politics is, I couldn’t resist turning it into a novel. The phrase ‘you couldn’t make it up’ sprang to mind all too often. In the end, I decided I would give it a go!

I tried to find an agent a few years ago, but then I discovered that more and more authors were turning to e-publishing and by-passing traditional publishers altogether, even if they had secured a book deal, so I gave up looking for a publisher and thought I’d try out doing it on my own. That’s not to say, however, I won’t try to go down the traditional publishing route in future, but it gives authors freedom for marketing, for pricing and for cover design. The book can be whatever you want it to be, not whatever the publisher wants it to be. The obvious “cons” are the lack of a traditionally published book, and the promotion a publisher can give you. Although having an ebook on Amazon, Smashwords, etc. is brilliant, it is still limiting. Many times have I had people say “Oh, the book sounds great – where can I buy a paperback copy, as I don’t have a Kindle…” Doing your own promotion is also, of course, very time-consuming and can sometimes be a lot of work for little reward, but when you do achieve something with your hard work, it can feel great. I’m very proud to have got this far on my own, and very much value the support of other independent authors, without whom (especially on Twitter!) my promotions wouldn’t have been as successful! And I have met some great people, made new contacts, and realised with hard work and perseverance I can achieve what I set out to achieve.

Someone who likes a good Westminster scrap (perhaps an avid PMQs observer?), but someone who is also interested in the human condition and what makes people – politicians especially – tick.

Perhaps they would read Michael Dobbs, with a dollop of Edwina Currie (nothing wrong with a good political bonkbuster!) and a bit of Archer. Can I also be cheeky and say, although I know it’s not technically a book (although you can buy the scripts and The Missing DoSac Files), The Thick of It?

If you had to sum up your book in a “Hollywood pitch” (eg Harry Potter meets Twilight, or Julian Barnes meets Jodi Picoult), how would you describe it?

House of Cards meets Mad Men meets Thick of It (with Jeffrey Archer and Edwina Currie lurking around the corner?).

Read an extract from Party Games