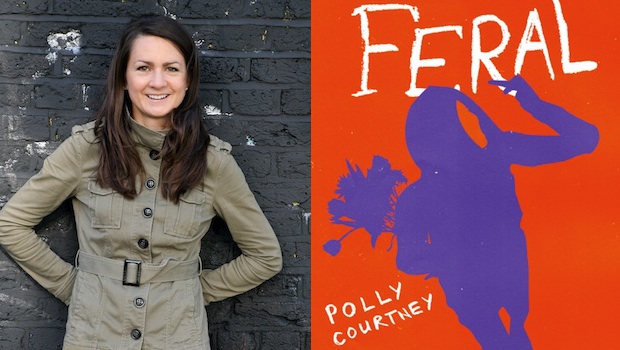 Polly Courtney made headlines when she parted company from her publisher, HarperCollins. Her latest novel, Feral Youth, was inspired by the London riots.

I never meant to be a writer. I trained as an engineer and got sucked into the world of investment banking – a world that (back in the early 2000s) not many people knew about. I was so disgusted by the greed, abuse, narcissism and sexism that I felt compelled to write a semi-autobiographical novel that exposed the darker side of this gold-paved city. I quit my job the day after bonus day and lived off £10,000 for the next year, writing what became my first novel, Golden Handcuffs. Since then I’ve written six novels and never looked back. The book I’m most excited about is my latest one, Feral Youth.

It’s about angry, disenfranchised young people on the streets of South London – in particular Alesha, a 15-year-old ‘bad girl’. The backdrop for the novel is the build-up to the 2011 summer riots and it’s written from Alesha’s perspective. The ambition is to get readers thinking about the reality of life for many young people like Alesha, who are either ignored or stigmatised in the mainstream press – labelled ‘feral’ and assumed to be beyond hope. Much of the book centres around the relationship between Alesha and an ex teacher, Miss Merfield, whose middle-class upbringing means she has a lot to learn about Alesha’s world.

You’ve seen Alesha on the street corner, in the shadows: hood pulled down over her face, hands in pockets. You might not have noticed her; she tries to lie low. She and JJ – her one true friend, whose background is a succession of foster homes – are invisible to Social Services. They live in the cramped one-bedroom flat of JJ’s nan’s and they live literally one day at a time. Streetwise and feisty, Alesha is not someone you’d mess with. Throughout the book, though, and in particular through the relationship with Miss Merfield (tea-drinking, floral dress-wearing piano teacher), we see that there’s much, much more to Alesha than first meets the eye – as there is for every ‘invisible’ person you pass on the street.

Back in 2011, I was looking into mentoring a young person at Kids Company – a charity that helps vulnerable, disadvantaged children across London – and at about the same time, riots swept across the nation, sparked by the death of Mark Duggan and destroying communities. I was glued to the newsfeeds, thinking, ‘why is this happening?’ and over the course of the next few months, I kept waiting for an inquiry – waiting for answers – but none came. As I learnt more about the lives of some of the most deprived children in our capital, through Kids Company and other organisations, I found myself trying to piece things together. Yes, large numbers of ‘rioters’ were opportunistic looters, but the ones setting fire to police cars? The ones hurling road signs at armed police? They weren’t just rebels without a cause. I wrote Feral Youth to explore the root causes and to try and give a voice to the young people who don’t get a fair hearing in our mainstream media.

I actually self-published my very first novel, Golden Handcuffs, because back in 2004 the publishers were saying ‘great style, but why on earth would anyone want to know what goes on in the City?’. It was the success of this book and my subsequent novel, Poles Apart, that got me a publishing deal with Avon, an imprint of HarperCollins.

Having been on my own publishing journey before signing, I had assumed there would be some collaboration in terms of coming up with titles and cover designs for my Avon books. I also expected some consistency between the ‘look and feel’ of the books published under my name.

What I found, however, was that each book was packaged to look like a generic book in the latest trend (‘misery memoir’, ‘chick lit’ etc.), instead of to represent the contents of the book – and despite my protests, all the books ended up looking totally different from one another. For readers, ‘brand Polly Courtney’ was a confusing mess.

I parted company with HarperCollins after my last book launch and have since taken back control of not just ‘brand Polly Courtney’ but all the component parts of the publishing process: editing (I use a professional freelance editor as well as crowd-sourced readers) and cover design (I work directly with a designer, who has also worked on the second editions for my first two novels), production and distribution (I use Troubador Publishing) as well as promotion – which I’m finding far easier to do now that I’m proud of the product I’m promoting!

They’re a mixed bunch. They like a bit of quirky realism and exploring different worlds, so I think they enjoy Rose Tremain, Stephen Kelman and Margaret Atwood – maybe with some Ben Elton for a bit of fun?

If you had to sum up your book in a “Hollywood pitch” (eg Harry Potter meets Twilight, or Julian Barnes meets Jodi Picoult), how would you describe it?

Um… Plan B meets The Help? Am I allowed a non-book in there?

Actually, how about this for a Hollywood pitch?

Read an extract of Feral Youth