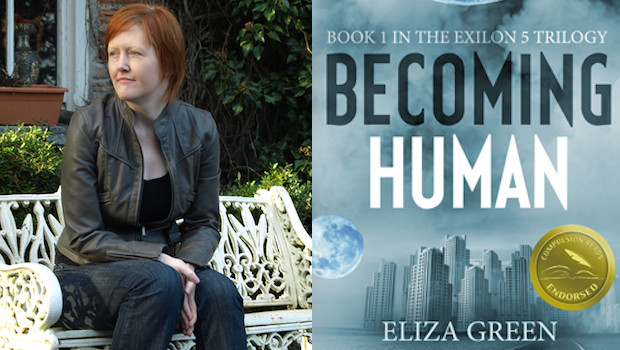 Irish-born Eliza Green was inspired to write her dystopian sci-fi tale, Becoming Human, after growing frustrated at the one-dimensional portrayals of aliens in fiction. Her novel, which she hopes will appeal to fans of Hugh Howey and Suzanne Collins, has already won plaudits from the indie writing community and Amazon readers.

Tell us a bit about yourself:
I’m originally from Dublin, Ireland and I’ve been writing since 2009. I hadn’t planned on being a writer, but I was looking for something more exciting than my job. One weekend, I threw a few words down on my computer. They turned into a chapter, which eventually turned into a book. It was then I realised how much I enjoyed creating stories and I haven’t looked back. I also blog over at www.elizagreenbooks.com. I offer my advice on publishing, marketing and selling, which comes from a mix of my own experiences and from others who’ve been at this game longer than I have. When I’m not writing or blogging, I work full time as an administrator. What I would like to do is make enough money so I can quit my job and write full time.

What’s your book about?
Becoming Human is a dystopian science fiction tale. The trilogy explores the difficulties faced when Earth is no longer habitable and humans are forced to search for a new planet to live on. But the new planet called Exilon 5 is already occupied by a race called the Indigenes. Becoming Human is about the humans’ and the Indigenes’ discovery of each other. Neither side is really prepared for what they find out.

Tell us more about the main character:
Bill Taggart is a World Government investigator, a job that has attracted enemies along the way. He’s paranoid and a loner, for good reason. He’s also struggling to come to terms with his wife’s disappearance. He believes the Indigenes killed her.  Revenge is never far from his mind.

The book also follows Stephen, the Indigene the World Government has ordered Bill Taggart to investigate. When he was young, Stephen lost his parents to the terra forming process that changed Exilon 5’s atmosphere. As an adult, he carries that pain around and has little tolerance for the humans who have settled on the planet. To help his society understand the humans’ darker motives, he must go against his instincts. To discover more about the humans, he must become like them.

Where did you get the idea for your book?
The book stemmed from a short story idea where I imagined a young boy and an alien sitting together. I got to thinking about what they might say to each other. I’m a huge science fiction fan, but I can’t remember too many films where the aliens were depicted as anything other than brainless homicidal maniacs. Yawn. Too few films, apart from Avatar by James Cameron, explore the alien’s point of view. My story gained momentum from there and the ‘secret’ storyline was added.

Why did you decide to self-publish?
I had tried the traditional publishing route and had a full MS request from one agency. I also had a favourable response from a smaller publisher, but they weren’t accepting my genre at that time. In the end, the agency passed on it and now that I think about it, the book wasn’t ready. I still had some work to do on it. At that point, I had been querying for a couple of years and I wasn’t prepared to sit around and wait for a definitely maybe from another agency or publisher. I wanted to publish my story sooner because it had been sitting on my computer for far too long. I also liked the idea of controlling the publishing process from start to finish, even if it meant working long hours outside of my day job and weekends to meet deadlines.

Becoming Human was recently awarded a Compulsion Reads endorsement, a site that sets out to highlight the best indie books around. It’s also receiving favourable reviews on Amazon. So, I guess I must be doing something right!

Imagine your ideal reader: which authors do they enjoy?
Oh, definitely Hugh Howey and Suzanne Collins. I know Suzanne writes YA, but I loved her Hunger Games trilogy and Wool was a superb read. I love dystopian fiction that focuses on the not too distant future. I would want my ideal readers to enjoy down to earth science fiction with a good M. Night Shyamalan twist. I’m talking Sixth Sense twist, not The Happening twist!

If you had to sum up your book in a “Hollywood pitch”, how would you describe it?
I would have to say, Avatar meets The Sixth Sense!