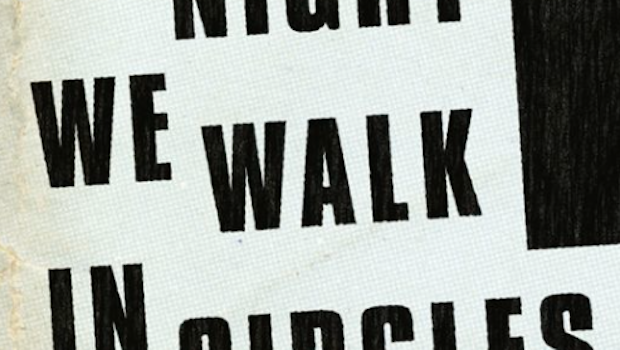 At Night We Walk in Circles by Daniel Alarcón

Blurb: Nelson’s life is not turning out the way he hoped. His girlfriend is sleeping with another man, his brother has left their South American country and moved to the United States, leaving Nelson to care for their widowed mother, and his acting career can’t seem to get off the ground. That is, until he lands a starring role in a touring revival of The Idiot President, with legendary guerrilla theatre troupe Diciembre. And that’s when the real trouble begins. The tour takes Nelson across a landscape scarred by years of civil war. Forging bonds with his fellow actors, he becomes hopelessly entangled in their lives, until a long-buried betrayal erupts into chaos. (Fourth Estate, January 2014)

“Comedy and menace are held in exquisite tension, and the circumstances by which the narrator becomes personally involved are beautifully plotted and paced, too good to spoil here. This is a clever book, not a clever-clever one, with a metafictional dimension that raises the emotional temperature rather than cooling it. As a heartwarming road novel, a pair of doomed love stories and a propulsive, irresolvable murder mystery folded into a scrupulous inspection of narrative ethics, it’s some feat.”

“Even if there’s nothing traditionally exciting about these obscure actors performing this absurd play in dusty town squares and run-down community centers, the story remains consistently compelling. For one thing, there’s Alarcón’s smoothly polished prose, flecked with wit and surprisingly epigraphic phrases. For another, the wobbly plot resists our efforts to divine what the novel is really about. Characters we initially assumed were important fall away, while people who seemed tangential suddenly become central. As in life, the most casual and inconsequential choices can wrench everything in a different, often tragic direction. While “the ill-fated tour” progresses, a sense of impending threat grows more ominous; placid scenes end suddenly with lines that knock the wind out of you.”

“Alarcón’s ingenious, looped narrative carries echoes of Beckett, Borges and Bolaño. There are hints of Kundera in the concise treatises on erotics, rebellion and laughter. There is even, perhaps, whispers of Woolf’s Jacob’s Room: our central, enigmatic hero (a naïve actor called Nelson) is reconstructed by the fragmentary accounts of others, including a not unimpartial narrator. But as the story unfurls, Alarcón proves that he is not just another young American hoping that immersion in modern masterpieces (often in translation) will lend him gravitas.”

“Although the characters are vividly drawn, what compromises the story is its narrative structure. This is far from a straight tale, simply told; Alarcón chooses to use an external narrator, a magazine journalist originally from T–––, to recount the story several years after the action. As the novel progresses, the conceit of a writer uncovering past events comes almost to swamp the forward thrust of the plot … That is not to say that there isn’t some terrific writing.”

“Alarcón is a skilled storyteller who reinforces the novel’s organizing motif with subtle repetition and tongue-in-cheek foreshadowing. By the time the plastic prop knife makes its final appearance, it has acquired all the weight of Chekhov’s gun. The ending is a quiet bomb, as satisfying as it is ambiguous.”

“Alarcón chooses to tell these stories from the point of view of a magazine journalist who is piecing together information from interviews and diaries. On one side of the novel-writing equation, what this gives him is freedom to roam between characters and – most of all – the great benefits of suspense and foreshadowing. Since the journalist is “reporting” from the end of the story, he is able to make us aware that something bad has happened to Nelson and that if only we stay with his account, all will be revealed. Great. This works well. But, in my view, the gain on one side of the equation leads to a big loss on the other: specifically, the loss of immediacy, intimacy and involvement.”

At Night We Walk in Circles by Daniel Alarcón The Omnivore