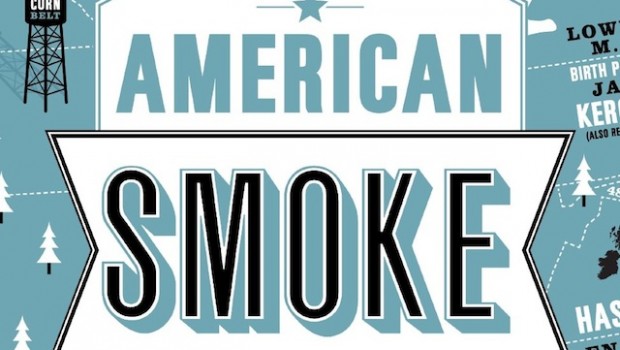 Blurb: Iain Sinclair breaks for the border with American Smoke, his first full engagement with the memory-filled landscapes of the American Beats and their fellow travellers.

In a book filled with bad journeys and fated decisions, this is a a delirious expedition in the footsteps of Malcolm Lowry, Charles Olson, Jack Kerouac, William Burroughs, Gary Snyder and more, heated by obsession (the Old West, volcanoes, Mexico) and enlivened by false memories, broken reports and strange adventures.

With American Smoke Sinclair confirms his place as the most innovative of our chroniclers of the contemporary.

“For Iain Sinclair’s fans – and I remain a firm one – American Smoke is a rich, deliciously readable treat. It will probably not greatly please disciples of either the Olson faction or the Ginsberg gang: for one thing, he quotes from the American writers only sparingly, so that the book is much better on the spirit than the letter of their works. Olson, he says in a stirring phrase, struck him as a ‘dark lantern against prejudice and lazy conformity’. But American Smoke is crammed with unusual learning and stimulating connections, at times vastly amusing in Sinclair’s scathing refusal to be taken in by frauds of any stripe – he calls a group of fancily dressed film-industry types ‘a seminary of Armani theologians’ and notes that a gathering of poets includes some ‘world-class bedwetters’. It is never less than bracingly, intoxicatingly written.”

“Sinclair’s references are often surprisingly popular. Alongside the high seriousness of JH Prynne and Francis Alÿs we’re offered unexpected vignettes on Courtney Love and Kurt Cobain. There’s a funny riff on the Twilight saga, and a wonderful moment when Cal Shutter, “the last American poet” and a football obsessive, plays him clips of Wayne Rooney’s goals while giving a running commentary. It’s also a quest for stylistic origins – those terse sentences, non-committal but always generous, which Sinclair has honed to a point over the years. They’re easy to do badly; impossible to do as well as him … In American Smoke his voice is still urgent; it still has things to tell us. If we know what’s good for us, we’ll listen.”

“I loved it. The delight – and the devil – lies in the detail. “Post-architectural reefs made from recycled sunglasses, blank walls of cloud quotations, with no obvious point of access beyond scimitar beaches of trampled cigarette butts. Dust siroccos wrapped free newspapers around confused pedestrians and bent lamp posts.” What Beat Elysium is Sinclair describing here? Well, actually, it’s Croydon … The Beats were egotistical monsters who wallowed in their self-inflicted misery and then wrote beautifully about it. They’re interesting, but also quite repulsive. American Smoke is a wonderful book, but I find it easy to resist the obsessive homage it evokes”

“Olson’s poetry, according to Jeremy Prynne, was “immeasurably dense and confused and packed with a kind of fertile obscurity”. That’s also true of Sinclair: his writing can be an imagistic seance-stream full of startling riffs, memory sifts, domino-effect associationism. This can be mystifying, but it’s important to ride the rapids and to go with the torrential flow; it’s precisely his excesses and his refusal to prostrate himself before “the average reader” that prevent his books from being assimilated into the gated and unlovable compound of “literary fiction”. “

American Smoke: Journey to the End of Light by Iain Sinclair The Omnivore