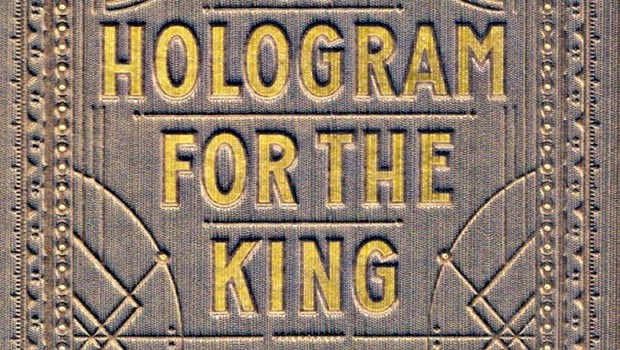 A Hologram for the King by David Eggers

Blurb: In a rising Saudi Arabian city, far from weary, recession-scarred America, a struggling businessman pursues a last-ditch attempt to stave off foreclosure, pay his daughter’s college tuition, and finally do something great. In “A Hologram for the King”, Dave Eggers takes us around the world to show how one man fights to hold himself and his splintering family together in the face of the global economy’s gale-force winds. (Hamish Hamilton)

“Eggers’s command of this middle-­management landscape is so sure — and his interest in the battle between humanity and technology so insistent — that his book might almost be a DeLillo novel written for the iPhone Generation, though delivered by DeLillo’s more openhearted and Midwestern nephew. Eggers’s inhabiting of the terms and tics of a distinctly American consciousness is as remarkable as, in earlier books, his channeling of Sudanese and Syrian sensibilities. ”

“Eggers’s style is as bare as the desert sky, his characters’ conversation devoid even of speech marks. And when it comes to description, few writers can turn out a simile like he can — the atrium of his hotel, milling with thobe-wearing Saudis is like “a convention of spirits”; the Red Sea shoreline looked as though “someone had been dropping dishes for a hundred years”.”

“The strangeness of the Saudi landscape – the dull uniformity of the hotel and the vast nothingness of the desert – is brilliantly captured, almost as if it were another planet to Alan. The economic hub, to be built in Abdullah’s name, stands like a half-built ghost city in the desert. Alan’s inner emptiness is reflected in this hollowed-out environment, the perfect no-man’s land for his negative epiphanies”

“You might wonder why you’d want to be stuck in the desert with this loser. Zero charisma, zero confidence, a man who only swam with crocs because his boat — like his self-esteem — was full of holes. Eggers, however, more than proves his skill and sensitivity as a writer. This fish-out-of-water mid-life crisis is an absurd, sad and wonderfully strange page-turner. That Eggers refuses to spruce up Clay or to grant him his victory parade is both brave and beguiling … his most laconic and accomplished book to date.”

“To say that nothing much happens in this book – that things are sort of aimless – is not to denigrate the story. A Hologram for the King is never boring: it is deeply involving and atmospheric, very poignant and very funny. Eggers writes from beginning to end with a lovely ease and confidence; the confidence to write plainly and let his effects be cumulative.”

“Clay’s story is told in short ­paragraphs and precise, somewhat ­melancholic sentences enlivened by deadpan comic notes and just a sprinkling of lyricism: “a plume of smoke unzipped the blue sky beyond the mountains” is about as fancy as it gets. It’s all a long way from the showy, self-congratulatory prose of his debut. And where in that book the overriding tone was blithely ironic, here it is earnest — even elegiac. One of the most powerful things about the novel is the suggestive way in which Clay’s loneliness is made to link up with America’s current economic problems.”

“Eggers is an authentic talent and, in his restrained, pitchperfect prose, he builds Alan patiently and expertly, like an American manufacturer of old, until he escapes his role in the allegory and becomes a man, soulful and sad and deeply sympathetic. Eggers is capable of this because his writing has never succumbed to the dark sarcasm. It has encoded within it a peculiarly American optimism, and a generosity of spirit that has animated his many projects from his precocious memoir to his magazines and his community writing projects that run now in nine cities. ”

“Eggers has been described, with a straight face, as “post-postmodern”, and it may be worth examining in what tradition he is now writing. Modernism sought to evoke life’s cruelties by denying the euphemistic forms and structures of fiction, and postmodernism responded by ironically highlighting those same structures to demonstrate their artificiality. Both approaches can now seem contrived and stylised. Eggers, who has certainly produced contrived work in the past, has now offered something more substantial. ”

“The King’s embryonic city appeals to Alan’s longing to be present “at the beginning of something”, to enact part of the pioneering that’s enshrined in American mythology. But his inconsistencies limit the reader’s sympathy: Alan is incapable of imagining any alternative socio-economic system to the one that’s ruining him, and he lacks interests. Boredom is “at once exasperating and alluring”, so why doesn’t he read a book? Does Eggers believe that to have his character do so would be unrealistic?”

“There is no doubt about Eggers’s talent: he is one of the most inter – esting and energetic young (-ish) American writers around and his first novel in a decade is intelligent, entertaining and full of finely observed impressions. However, its lament for a lost dream of real Americans making real things is at the very least deeply nostalgic.”

“The weightlessness and emptiness, though deliberate, sometimes threaten to engulf the novel – especially since Eggers is temperamentally anything but a minimalist. He tends to follow the human interest, and then to drop it because the overall scheme demands that pretty much nothing happens. Nevertheless, this is a clever, likeable and very entertaining novel. A Hologram for the King treads lightly and elegantly, considering its weighty subject matter: globalisation and its discontents, the downsizing and outsourcing of the American dream, real people lost in an increasingly virtual world.”

“The novel is about globalisation. But what sticks is an understated environmentalism or gloom in beholding a progressively uninhabitable planet. It may be pinched human settlements in the kingdom’s desert mountains that prompts a thought that ‘people shouldn’t live here’, but when the thought is expanded to the idea that man’s work is ‘done behind the back of the natural world’, that ‘when nature notices, and can muster the energy, it wipes the slate clean,’ it applies everywhere. ”

“Eggers’s early prose was largely inspired by the late David Foster Wallace, although Eggers has always been far less afraid of sentiment. His writing has become much simpler over the years. The prose is perhaps a little too Janet and John in places though this is clearly a conscious decision designed to make a complex book accessible.”