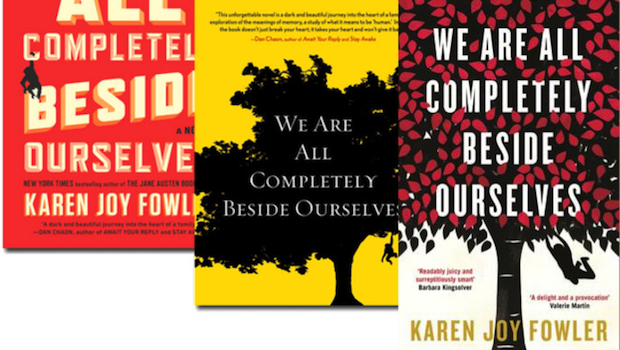 We Are All Completely Beside Ourselves by Karen Joy Fowler

Blurb: Rosemary’s young, just at college, and she’s decided not to tell anyone a thing about her family. So we’re not going to tell you too much either: you’ll have to find out for yourselves what it is that makes her unhappy family unlike any other. Rosemary is now an only child, but she used to have a sister the same age as her, and an older brother. Both are now gone – vanished from her life. There’s something unique about Rosemary’s sister, Fern. So now she’s telling her story; a looping narrative that begins towards the end, and then goes back to the beginning. Twice. (Serpent’s Tail, April 2014)

“Fowler has that ability, present in a great deal of American writers’ work, to ease you into a family situation and make you feel as if you’d known every single member personally for years. And it’s with such ease that she also asks the important questions, about how and why we love one another, what happens when that love is taken away, and what responsibility we have once we instill and respond to love.”

“Fowler is neither kooky or didactic: her narrative flits adeptly between registers, mixing pleasure and pain with all the naughty chutzpah of a chimp twizzling a feather duster … [an] achingly funny, deeply serious heart-breaker”

“A novel that is both one giant moral compass and a harrowing depiction of a family’s implosion, the prose of which zings on the pages – a grandmother, for example, for whom ‘conspiracy is folded into her DNA like egg whites into angel food cakes’”

“Fowler, best known for her novel The Jane Austen Book Club, is a trustworthy guide through many complex territories: the historical allure and dicey ethics of experimental psychology, not to mention academic families and the college towns of Bloomington and Davis. (It’s worth noting that Fowler’s father was at one time a psychology professor at Indiana University, studying animal behavior.) The novel’s fresh diction and madcap plot — swapped suitcases, a Madame Defarge ventriloquist’s dummy, lost bikes and drug-laced coed high jinks — bend the tone toward comedy, but it never mislays its solemn raison d’être.”

“Plot is not the novel’s strongest suit. The wackiness that stumbles into the final chapters feels incongruous with the book’s poignancy and its serious themes. But Rosemary’s voice and her efforts to understand — and forgive — herself are moving. Fowler has such a sprightly tone, an endearing way of sloughing off profound observations that will illuminate your own past even if you have no chimps swinging in your immediate family tree.”

“At first ironic and laugh-out-loud funny, the narrative gradually darkens, and while the second half of the book certainly loses energy and momentum, it’s difficult to navigate the final chapters without a huge lump in the throat. “

“We Are All Completely Beside Ourselves is a thoughtful, well-crafted novel, interlaced with choice quotations from Kafka’s 1917 short story A Report to an Academy.”