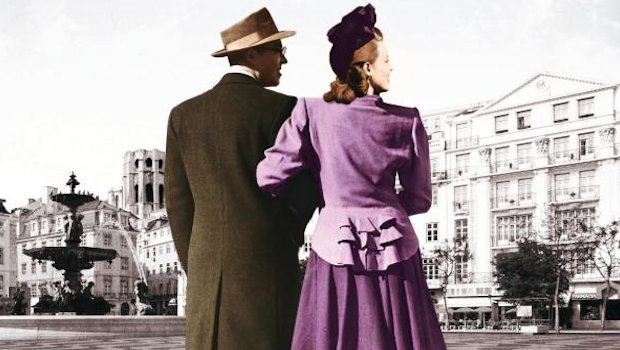 Blurb: It is the summer of 1940, and Lisbon is one of the only neutral ports left in Europe – a city filled with spies, crowned heads and refugees of every nationality, tipping back absinthe to while away the time until their escape. Awaiting safe passage to New York on the S. S. Manhattan, two couples meet: Pete and Julia Winters, expatriate Americans fleeing their sedate life in Paris; and Edward and Iris Freleng, elegant, independently wealthy, bohemian, and beset by the social and sexual anxieties of their class. Swept up in the tumult, the hidden currents of the lives of these four characters – Julia’s status as a Jew, Pete and Edward’s affair, Iris’s increasingly desperate efforts to save her tenuous marriage – begin to come loose. This journey will change the four of them irrevocably, as Europe sinks into war. (Bloomsbury, 2013)

“The atmosphere of The Two Hotel Francforts – both in and out of the bedroom – owes much to Leavitt’s earlier novel, While England Sleeps, which recounts an affair between an upper-class twerp and his cockney bit of rough during the Spanish civil war. I was also reminded of Alan Hollinghurst’s The Stranger’s Child – not only for Leavitt’s ability to render sex in a manner that has us panting and gasping along with his characters, but also in the way that this novel goes back to reclaim hidden gay histories.”

“The Two Hotel Francforts is a highly accomplished, urbane and satisfying novel. Unlike American gay writers of the generation before him, such as Andrew Holleran, Edmund White and Tom Spanbauer, Leavitt has always been more concerned to explore the interstices between the heterosexual and homosexual worlds than to anatomise the latter in semen-soaked prose. Here, as in his first novel, The Lost Language of Cranes, he focuses on a wife’s discovery of her husband’s homosexuality, though Iris’s response is very different – and far more disturbing – than Rose’s in the earlier book … [Leavitt] is less successful in explaining Pete, who is the least rounded of the central quartet. It seems improbable that, even in the febrile atmosphere of wartime Lisbon, a married man who has displayed no previous homosexual leanings should tumble quite so readily into another man’s arms.”

“ Yet Leavitt paces his narrative with masterly skill, and carefully doles out the truth about his characters to keep you turning the pages. His story is set against meticulously researched details of the plight of refugees in a country that was supposedly neutral, yet unquestionably on the Nazi side, and illuminates a little remembered episode of the Second World War.”

“Leavitt is a fluent, clever writer with a habit of playing with historical fact — which explains what might seem the failings of this curious and yet absorbing book. It isn’t so much a story as it is a piece of writing about the writing of the story of people in a situation like this.”

“Too much backstory, too many last- minute revelations, too many plot twists, too little real development of any of the characters. Ultimately I simply could not find the pulse of this novel, which beneath the stylish surface seemed as hollow as the lives of its main characters.”

The Two Hotel Francforts by David Leavitt The Omnivore