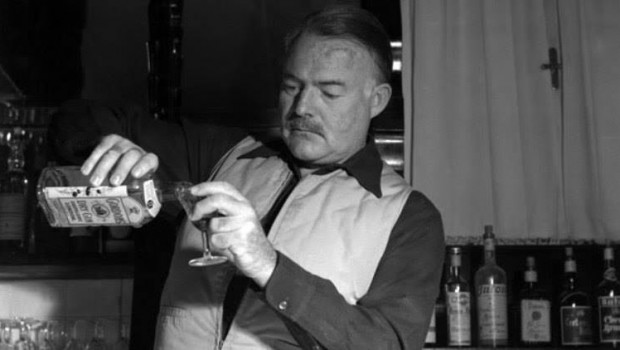 The Trip to Echo Spring: Why Writers Drink by Olivia Laing

Blurb: Why is it that some of the greatest works of literature have been produced by writers in the grip of alcoholism, an addiction that cost them personal happiness and caused harm to those who loved them? In The Trip to Echo Spring, Olivia Laing examines the link between creativity and alcohol through the work and lives of six extraordinary men: F. Scott Fitzgerald, Ernest Hemingway, Tennessee Williams, John Berryman, John Cheever and Raymond Carver.

All six of these writers were alcoholics, and the subject of drinking surfaces in some of their finest work, from Cat on a Hot Tin Roof to A Moveable Feast. Often they did their drinking together – Hemingway and Fitzgerald ricocheting through the cafés of 1920s Paris; Carver and Cheever speeding to the liquor store in Iowa in the icy winter of 1973. Olivia Laing grew up in an alcoholic family herself. One spring, wanting to make sense of this ferocious, entangling disease, she took a journey across America that plunged her into the heart of these overlapping lives. As she travels from Cheever’s New York to Williams’ New Orleans, from Hemingway’s Key West to Carver’s Port Angeles, she pieces together a topographical map of alcoholism, from the horrors of addiction to the miraculous possibilities of recovery. Beautiful, captivating and original, The Trip to Echo Spring strips away the myth of the alcoholic writer to reveal the terrible price creativity can exert.

Why do writers drink? | Blake Morrison | The Guardian

“What gives her book its brilliance and originality is not personal memoir or literary history but the quality of its writing … for me she is at her best when she puts the case histories and medical texts back on the shelf and just lets her ­imagination catch the glints and gleams of landscape and language.”

“Laing writes so well, so seductively in fact, that this deconstructed way of pursuing a story works brilliantly again, even if she doesn’t come to many definite conclusions … Laing is an astute and unsparing critic of even these writers she loves so much and she doesn’t credit for a minute any of the phoney arguments that drinking actually helped them.”

“…the book’s subtitle, Why Writers Drink, undersells her achievement. She has produced not an answer to a glib question, but a nuanced portrait – via biography, memoir, analysis –of the urge of the hyperarcticulate to get raving drunk … The book achieves its greatest force through Laing’s mix of intellect and intuition, which often recalls the New Yorker writer Janet Malcolm.”

“Laing’s analysis of the complex addiction is consistently shrewd. But what makes The Trip to Echo Spring truly worthwhile is that she, like those she writes about, is a terrific writer. Cheers, Olivia.”

“The beauty of Laing’s book lies not just in the poetry of her prose, the rich array of images, and literary allusions to her chosen subjects evoked during her transcontinental ghost-hunt, but intriguing links she makes to a wider literary landscape — to Shakespeare, Chekhov, Poe, Hart Crane, Lawrence, Evelyn Waugh, Laurie Lee, and even The Wind in the Willows. Whether, on her occasional plunges into the depths of psychosocial research, she finds clear water — explanations to illuminate her search — the reader will have to judge, but when poetry gives way to scientific jargon inevitably there is a sense of loss.”

“Concentrating solely on the role alcohol played in the lives of these writers is an audacious move. To a degree, Ms Laing manages to pull it off. Her book has its shortcomings. The biographical details of these writers often feel rattled off, and her criticism can be perfunctory. She tends to summarise rather than analyse poems and novels. And certain writers—such as Williams and Berryman—apparently grab her attention more than others. But there is much to enjoy in this trip across America. In Ms Laing’s hands these famously complicated men become fragile, and terribly human.”

“There are passages of what might at a pinch be called literary criticism – in Laing’s hands, a process in which this play or that short story is briskly winnowed until the part about drink – or the part that represents an act of denial about drink – can be held up in triumph. There are even fragments of what might have been a rather better book: a straightforward first-person memoir in which Laing talks about having an alcoholic stepmother. But it doesn’t seem to occur to her that her personal experiences may have made her less, not more, able to write objectively about other people’s drinking.”

The Trip to Echo Spring: Why Writers Drink by Olivia Laing The Omnivore