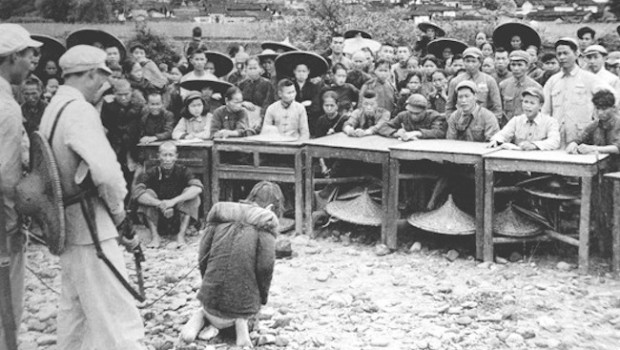 Blurb: In 1949 Mao Zedong hoisted the red flag over Beijing’s Forbidden City. Instead of liberating the country, the communists destroyed the old order and replaced it with a repressive system that would dominate every aspect of Chinese life. In an epic of revolution and violence which draws on newly opened party archives, interviews and memoirs, Frank Dikötter interweaves the stories of millions of ordinary people with the brutal politics of Mao’s court. A gripping account of how people from all walks of life were caught up in a tragedy that sent at least five million civilians to their deaths. (Bloomsbury, 2013)

“Horrific but essential reading … a brilliant and powerful account of the formation of that society. This is an angry book, but its fury is always contained within a framework of impressive research and elegant prose … While he does an excellent job of showing how the new order gradually took shape, his analysis does leave space for a continuing debate on the reasons for the new regime’s stability.”

“The first years of the People’s Republic under Mao Zedong were a golden age, according to Chinese Communists and many in the West … Frank Dikotter, a Dutch-born historian at the University of Hong Kong, destroys this illusion … With a mixture of passion and ruthlessness, he marshals the facts, many of them recently unearthed in party archives. Out of these, Mr Dikotter constructs a devastating case for how extreme violence, not a moral mandate, was at the heart of how the party got to power, and of how it then governed.”

“Too often, historians use the cloudy jargon of bureaucrats to recount horrors which ordinary language can scarcely describe. Historians talk, almost as though they were communist officials themselves, of “liquidation”, of “extermination” and millions of deaths … Dikötter, by contrast, must be admired for the manner in which he puts a human scale on the enormous barbarities of the communist takeover of China.”

“The book is a remarkable work of archival research. Dikötter rarely, if ever, allows the story of central government to dominate by merely reporting a top-down directive. Instead, he tracks the grassroots impact of Communist policies – on farmers, factory workers, industrialists, students, monks – by mining archives and libraries for reports, surveys, speeches and memoirs. In so doing, he uncovers astonishing stories of party-led inhumanity and also popular resistance.”

“Path-breaking … Some of what Dikötter describes has been known in general terms, but what he has done here – as when he was writing about the later famine – is take advantage of the opening of archives in which first-hand official reports and accounts of death in all its forms, together with the myriad other forms of Maoist horror, can now be read unedited. It will be increasingly difficult for Western China specialists to write with authority based only on previous Western publications or on Chinese public statements. We remain in Frank Dikötter’s debt.”

“Dikotter’s achievement in this book is remarkable … If The Tragedy of Liberation has a weakness, though, it is that the staggering amount of detail sometimes becomes overwhelming … But this does not detract from Dikotter’s achievement. For many years, histories of China have treated the 1950s as if the decade was an interlude of reason. That belief does not survive contact with this book.”

“For what it tells us about the foundations of the modern Communist Party, and the backstory to so many decisions and statements made in Beijing today, it is essential reading … The book is also a dispassionate study of the way nations can pervert optimism and descend into lunacy by steady increments. Possibly too dispassionate. Dikötter does not over-analyse how you move from joyous crowds in Tiananmen Square to a man killing himself because his persecutors were accusing him of murdering eight people when he was a one-year-old baby.”

“Not every detail in this book seems spot-on. Though the cultural history of the surgical mask remains to be written, I doubt that their public wearing in China derives from the Korean War scare over American biological weapons … But time and again the footnotes lead back to official Chinese archives, often not readily accessible to foreign historians. The picture is therefore technically only “partial”; so if it contains much that in contemporary parlance “hurts the feelings of the Chinese people”, then those feelings can only be assuaged, and possible accidental bias resolved, by allowing free access to the whole.”

The Tragedy of Liberation: A History of the Chinese Revolution 1945-1957 by Frank Dikötter The Omnivore