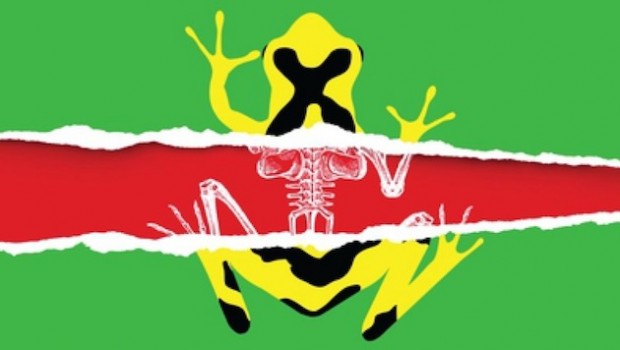 The Sixth Extinction: An Unnatural History by Elizabeth Kolbert

Blurb: Over the last half a billion years, there have been five mass extinctions of life on earth. Scientists around the world are currently monitoring the sixth, predicted to be the most devastating extinction event since the asteroid impact that wiped out the dinosaurs. Elizabeth Kolbert combines brilliant field reporting, the history of ideas and the work of geologists, botanists and marine biologists to tell the gripping stories of a dozen species – including the Panamanian golden frog and the Sumatran rhino – some already gone, others at the point of vanishing. The sixth extinction is likely to be mankind’s most lasting legacy and Elizabeth Kolbert’s book urgently compels us to rethink the fundamental question of what it means to be human.

Read an interview with Elizabeth Kolbert | The Independent on Sunday

“Her extensive travels in researching this book, and her insightful treatment of both the history and the science all combine to make The Sixth Extinction an invaluable contribution to our understanding of present circumstances, just as the paradigm shift she calls for is sorely needed… She makes an irrefutable case that what we are doing to cause a sixth mass extinction is clearly wrong. And she makes it clear that doing what is right means accelerating our transition to a more sustainable world.”

“Her writing here is the very model of explanatory journalism, making highly complex theories and hypotheses accessible to even the most science-challenged of readers, while providing a wonderfully tactile sense of endangered (or already departed) species and their shrinking habitats.”

“…with extinctions and new discoveries piling up, there is a need for still more studies. And in The Sixth Extinction, Elizabeth Kolbert, a staff writer for the New Yorker, offers well-composed snapshots of history, theory and observation that will fascinate, enlighten and appal many readers… One of the strengths of Field Notes from a Catastrophe, Kolbert’s 2006 book on global warming, was vivid reportage from exotic locations.The Sixth Extinction shares this characteristic. ”

“[A] compelling account of human-inspired devastation… It is a disquieting tale, related with rigour and restraint by Kolbert”

“This is not a hysterical book. It is meticulous — and may be overly so for some readers. As a journalist, Kolbert clearly feels the need to base her explanations on scientific facts. She also gives reams of historical context… There are lighter moments… I wish the publisher had felt able to stretch to some colour photos. The cramped grey pictures do not do justice to Kolbert’s uplifting prose about the wonders of nature.”

“New Yorker writer Elizabeth Kolbert might have had an enviable National Geographic-style itinerary for researching this survey—the Great Barrier Reef, Brazilian Amazonia, Peru, Panama—but what she saw, and has recorded without melodrama or sentimentality in this important book, is often heartbreaking and deeply alarming.”

“[An] engaging study… her evidence, fluidly and authoritatively presented as she criss-crosses the Earth’s wild corners, is worrying.”

“Among the prophetic Cassandras of global catastrophe, Kolbert’s voice rings out clearly and convincingly.”

The Sixth Extinction: An Unnatural History by Elizabeth Kolbert The Omnivore