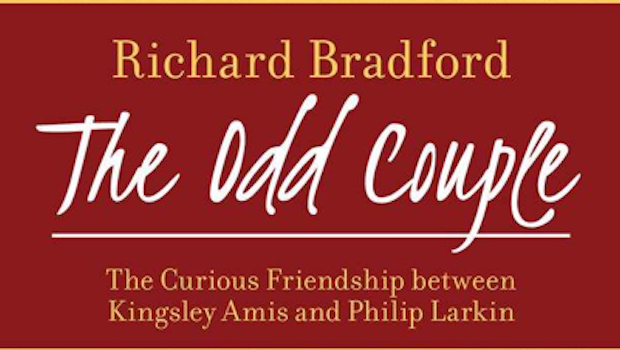 The Odd Couple: The Curious Friendship Between Kinglsey Amis and Philip Larkin by Richard Bradford

Blurb: Kingsley Amis and Philip Larkin altered the landscape of post-war British fiction and poetry and were among the most popular serious literary writers of the second half of the twentieth century. Respectively, their fiction and poetry particularly works such as Lucky Jim and The Whitsun Weddings have captured the imagination of the reading public and speak to us of something innately English and timeless. Published works only touch the surface of the bizarre and magnetic relationship between these two controversial and eccentric writers. The true, complex story is told here for the first time. Thoroughly researched, and brilliantly composed by Richard Bradford, author of critically acclaimed separate biographies of both writers, and of Martin Amis, The Odd Couple shows us these two literary giants as we have never seen them before. It also shows us how much of their most important work is an index to their relationship. Had they not met they would not have become the writers they were. (The Robson Press, 2012)

The Life of a Long-Distance Writer: A Biography of Alan Sillitoe by Richard Bradford

The Complete Poems by Philip Larkin

“Both men emerge as absolute monsters … This is a brilliantly written book but do not expect to emerge from it with an enhanced view of human nature.”

DJ Taylor, The Independent on Sunday

“Bradford teases all this out with considerable artfulness and great sympathy, amid a sprinkling of tiny errors … On the plus side, for a practising academic, Bradford has a cheeringly anti-academic style and rarely respects any of the reputations he runs up against.”

“As the superlative Richard Bradford explains: ‘Each found in the other dimensions of their own personality either more fully developed or comfortably contained.’”

“All this is entertainingly related by Richard Bradford — who has already written biographies of both men — with commendable brio and brevity. A fine critic, he gives due weight to the work, as well as regaling us with frank, sometimes scorching details of the lives — not least the two men’s witheringly scatological assessments of their friends and enemies (‘bum’, ‘shit’ and ‘cunt’ were much-used epithets). Their friendship was conducted chiefly by post, and Bradford has quarried the correspondence for this concise dual life in letters and brought up the gems.”

“Lively, readable and often scandalous … Many of their letters about girls were fantasy, especially about young girls. Pubescent, but only just, was their agreed ideal: the 12-16 age group. Nowadays such feelings are classed as paedophilia, although perhaps we ought to revive the neglected word ephebophilia (love of youth) here. It’s tricky territory in today’s Salem, 1692-type atmosphere, admittedly. Perhaps both writers should be put on some post-mortem Jimmy Savile register, along with Elvis, Edgar Allan Poe, Romeo and quite a few others.”

“It is a triumph of ‘cut and paste’ — indeed, such a triumph that by now Bradford must be able to press the Command button and C for Copy simultaneously in his sleep … never before have I come across quite such a shameless exercise in marketing old rope … Is self-plagiarism an offence in academia? I suppose it is better than plagiarising others, but I wonder what the professor would say if his students were to produce essays which, on closer inspection, turned out to be copied from essays they’d given in earlier?”

The Odd Couple: The Curious Friendship Between Kinglsey Amis and Philip Larkin by Richard Bradford The Omnivore