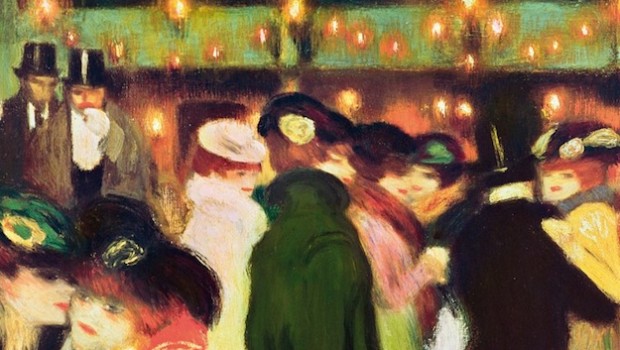 In Montmartre: Picasso, Matisse and Modernism in Paris, 1900-10 by Sue Roe

Blurb: The real revolution in the arts first took place not, as is commonly supposed, in the 1920s to the accompaniment of the Charleston, black jazz and mint juleps but more quietly and intimately, in the shadow of the windmills – artificial and real – and in the cafes and cabarets of Montmartre during the first decade of the century. The cross-fertilization of painting, writing, music and dance produced a panorama of activity characterized by the early works of Picasso, Braque, Matisse, Derain, Vlaminck and Modigliani, the appearance of the Ballet Russe and the salons of Gertrude Stein.

“What an eye for art Roe has: she doesn’t spin out unduly the descriptions, but you feel the presence of the work. I loved knowing that the one painting Derain would not part with was his copy of Ghirlandaio’s Bearing the Cross, that Matisse kept Cézanne’s Three Bathers right above his easel, and that his portrait of his wife hung right above Gertrude Stein’s writing desk.”

“Roe is particularly good at communicating the extraordinary devotion of Matisse and Picasso to their work… One of the most intriguing questions that Roe leaves dangling is why Paris at the beginning of the last century should have produced such a fertile environment. Gertrude Stein, whose writing was massively influenced by Picasso’s cubist revolution, suggested that “in her attitude to incomers France displayed the detachment of an artist”. But this does not really seem to be borne out by Roe’s book.”

“…in her entertaining, ingeniously structured account Roe brings Mont-martre’s heyday back to life… Scholars of art history will find little that is new in this book, but they will find a fresh sense of how all these people — the geniuses and the hangers-on, the wealthy collectors and the unworldly painters — related to each other.”

“…neither polemic nor art history, but a colourful narrative describing the travails and triumphs of an equally colourful cast… While the art-historical story of the decade is well known, Roe describes the detail of daily life in Montmartre with particular skill. She has a keen eye for the appearance of the artists, conjuring up Picasso in his workman’s fustian, looking, as Gertrude Stein said, like a bootblack, and Vlaminck wearing a wooden tie that he painted different colours on a whim, or Braque sporting tweed suits, black silk cravats, a bowler hat and a Javanese cane.”

“[An] entertaining book… [Roe brings] to life the excitement and impact of genuinely new ideas, ideas that we now take for granted as we trudge around the galleries of Europe. She skilfully weaves her description of artworks into her romp through the artists’ struggles and fractious personal relationships.”

“Although there is little here that will surprise anyone with an interest in the subject, and much that will seem well worn and familiar, In Montmartre does not pretend to be a work of fresh scholarship. As an elegant synthesis of complex material, though, it excels: Roe is a skilled and graceful writer, capable of fashioning an accessible, nimble narrative. I admire her judicious use of contextual social history, as well as her emphasis on the influence upon artists of Parisian popular culture, including poster art, silent movies, dance halls, the circus and pulp fiction.”

“Both topographically and biographically, the boundaries are stretched. Much of the action takes place away from Montmartre; Matisse, for example, spent most of his time elsewhere. It is hard to see quite how the smart couturier Paul Poiret fits into this tale of fervent modernism; and Diaghilev’s association with Picasso, Matisse et al really comes some years later. But the story-telling is lively, so you don’t mind.”

“If the conception is problematic, the execution is also disappointing. Paul Valéry’s aesthetic ideal was exactitude in imagination and language. In Valéry’s terms, In Montmartre inclines towards inexactitude. The method here is somewhat similar to the earlier work, but less seamless, or perhaps less digested. Roe does not do original research; she reads widely in the existing literature. Out of this close reading she fashions her own account. At its best, this makes for a refreshing retelling. Often, it is more of an unpicking and restitching. Sometimes, it approaches a sort of transference.”

“…Roe has the annoying habit of clogging her sentences with so many adverbs and double-negatives that you often have to read a sentence two or three times to find out what it means. I suspect that her style has been influenced by her admiration for one of the main characters in her book, the bullish American heiress Gertrude Stein… at times the prose becomes so convoluted that it turns a singularly exciting topic into something very dreary… Like many biographers, particularly group biographers, she tends to get bogged down in the infinite permutations of who did what when, and even whether they did it at all.”

In Montmartre: Picasso, Matisse and Modernism in Paris, 1900-10 by Sue Roe The Omnivore