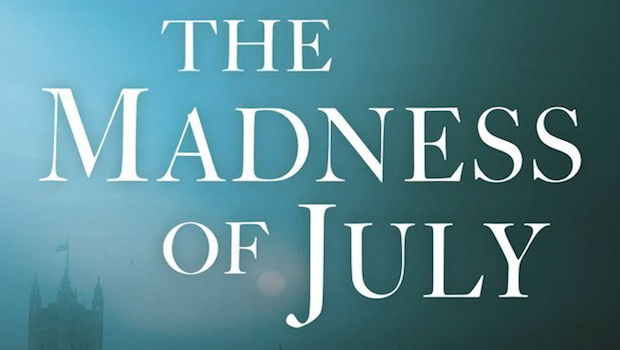 The Madness of July by James Naughtie

Blurb: It is a sweltering July in the mid-1970s, and for Will Flemyng, foreign office minister, the temperature is rising with each passing hour. A mysterious death has exposed secret passions in government, bringing on a political crisis that will draw him back into a familiar world of danger and deceit. For Flemyng has a past. He was trained as a spy for a life behind enemy lines and now he’s compelled to go back. In the course of one long weekend he must question all his loyalties: to his friends, his enemies, and to his own two brothers. Only then can he expose the truth in London and Washington. When he has walked through the fire. (Head of Zeus, February 2014)

“Plotwise, The Madness of July is a slow-burning puzzle populated by a voluminous cast: ministers, ambassadors, whips and spooks, all of whom gradually disinter the conspiracy at the heart of the story. The body of an American has been found in a cupboard in the House of Commons, a syringe beside the corpse. But did the former CIA man take his own life, or were darker forces at work? It’s a clever, intelligent story, not so much a thriller as a political novel by someone who knows the territory intimately. Readers who approach the book expecting narrative fireworks and edge-of-the-seat suspense may be disappointed. Le Carré doesn’t really write spy thrillers any more; neither does James Naughtie.”

“The book itself is tight lipped; the reader has to piece together a drip-feed of clues – and the process becomes addictive.”

“A fast-paced read with intriguing, value-added insights into the impact of political life, not only on our leaders but those close to them, from a man with 30 years’ experience of the corridors of power. ”

“There are reasonably rewarding dramatic surprises, although like many spy thrillers it’s a bit like solving a cryptic crossword or sorting out all the finer points of a particularly convoluted episode of  Inspector Morse. A pat on the back if you manage to hang on to the plot all the way to the end.”

“You have to admire the enterprise – instead of churning out another heartless spy caper, Naughtie wants to delve into the minds of men. But his method is to tell, not show, and the telling often obscures more than it explains … To indicate distress, Flemyng is endlessly sent on mournful walks through city streets, or described staring thoughtfully out of windows … The Madness of July is a book bursting with its author’s enthusiasms – you can sense his relish as he describes the Scottish landscape and feel his boyish excitement at all the spy games and subterfuge. I can almost imagine Naughtie bouncing on a chair as he wrote, and it’s the authorial fizz that sustains the book – pushing it along at a boisterous lick so that a climax is reached before the reader feels too weighed down by lyrical accounts of the weather.”

“his is an overstuffed Ottoman of a book, complete with a few broken springs and straggly horsehair, but it is endearing too. We are teased a bit, led up the garden path and treated to some of Naughtie’s verbal richness (someone has a “kenspeckle presence”).”

“ Vagueness seeps through The Madness of July like fog, leaving the reader disoriented and decidedly unthrilled … At one point we follow Flemyng back to Scotland and Altnabuie, the house where he grew up. Suddenly, Naughtie’s weakness for what Elmore Leonard called “hooptedoodle” falls away and we get a sense of the infinitely better book he might have written were he not so obsessed with the romance of male secrecy.”

The Madness of July by James Naughtie The Omnivore