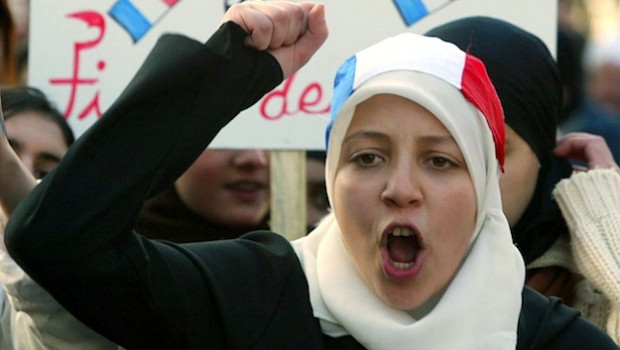 The French Intifada: The Long War Between France and Its Arabs by Andrew Hussey

Blurb: Beyond the affluent centre of Paris and other French cities, in the deprived banlieues, a war is going on. This is the French Intifada, a guerrilla war between the French state and the former subjects of its Empire, for whom the mantra of ‘liberty, equality, fraternity’ conceals a bitter history of domination, oppression, and brutality. This war began in the early 1800s, with Napoleon’s aggressive lust for all things Oriental, and led to the armed colonization of Algeria, Morocco and Tunisia, and decades of bloody conflict, all in the name of ‘civilization’. Here, against the backdrop of the Arab Spring, Andrew Hussey walks the front lines of this war – from the Gare du Nord in Paris to the souks of Marrakesh and the mosques of Tangier – to tell the strange and complex story of the relationship between secular, republican France and the Muslim world of North Africa. The result is a completely new portrait of an old nation. Combining a fascinating and compulsively readable mix of history, politics and literature with Hussey’s years of personal experience travelling across the Arab World, The French Intifada reveals the role played by the countries of the Magreb in shaping French history, and explores the challenge being mounted by today’s dispossessed heirs to the colonial project: a challenge that is angrily and violently staking a claim on France’s future.

Read an extract from the book | The Observer

“Fascinating and hugely readable… The key insight, perhaps, is how anti-semitism is inextricably linked with the colonial experience in Algeria, where Jews were treated better than Arabs. “Jews enjoyed special favoured status under the same French law that excluded Muslims from (French) citizenship,” writes Hussey. “Algerian Muslims saw Jews as traitors who had taken their country by stealth.””

“Hussey ends his book with a sketch of France’s prison system, in which he suggests about seven in 10 inmates are Muslim – an estimate that speaks eloquently to the failures of postcolonial integration. Are French jails, the author asks, serving inadvertently as “the engine room of Islamic radicalism in France”? It is a troubling question, but many readers will feel Hussey leaves himself too little space to give an adequate answer. Taken as a whole, though, The French Intifada is a good introduction to the most sensitive issues of race, religion, citizenship and history that grip modern France.”

““Anglo-Saxons” who dish up home truths about the angry, dispossessed “djeunes de la cité” – ethnic-minority kids on the estates – are told to look to their own countries’ glaring mistreatment of non-white immigrants. So it is likely that some French disapproval awaits Andrew Hussey, a British academic and commentator who has just taken a scalpel to this, the rawest of Gallic nerves. The French Intifada: the Long War Between France and its Arabs mixes lively street reportage with the history of two brutal centuries in France’s former Maghreb territories. The provocative title may not be acceptable in a French edition; even Ms Le Pen avoids talking about “France’s Arabs”.”

“It is fashionable in some heavily funded quarters to say we need to influence these young peoples’ “meta narrative”, as if terrorism can be abated by the clichés of a third-rate post-modernist literary seminar. Hussey is too adult for any of that. Again and again he stresses the dire economic circumstances that prevail, whether in North Africa or French suburbs, and the fateful and toxic mix of big ambitions, poor education and, in this world of celebrity footballers and pop stars, a refusal to believe in the hard graft that an older generation practised and which girls seem to grasp.”

“There is some terrific and chilling reporting, and Mr Hussey is at his best when on the streets, hanging out in cafés and souks. Yet there are two problems with this book. One is what it does not say. The author creates the impression of unqualified French-Muslim wrath. Yet what about those French people of modest north African origins—Rachida Dati, Najat Vallaud-Belkacem, to name but two politicians—who are not visibly simmering with post-colonial rage? It might have strengthened his case to examine what distinguishes the angry from the rest. The other is the book’s structure. Much of it—too much, even for the interested reader—is devoted to Algerian, Moroccan and Tunisian political history. Even more awkward is a short but engrossing chapter on radical Islam in French prisons that is dropped in at the end in lieu of a conclusion.”

“Hussey thinks that the French press, metropolitan and fashion-driven, doesn’t want to know how bad things are. He believes that the hatred and fear can be explained only by the long and appalling history of French empire, and in this respect he is correct. I admire Andrew Hussey’s book because he has had the courage to go where I didn’t. And yet I cannot wholly buy into the sense of futility that pervades it. True, the story of the French and their Arabs is a gruesome one, but maybe things are not quite as hopeless as he thinks… In particular, he fails to examine how French republicanism, while part of the problem, is also a solution to the growth of Islamism.”

David A Bell, The Guardian

“Going well beyond news reports, the book shows just how hot and fierce a vein of hatred for France runs through the Muslim populations that have experienced French rule… if The French Intifada is disturbing for these revelations, it is even more so because Hussey has written so carelessly, and in so needlessly inflammatory a manner. He repeatedly makes large, highly questionable generalisations without anything resembling evidence.”

The French Intifada: The Long War Between France and Its Arabs by Andrew Hussey The Omnivore