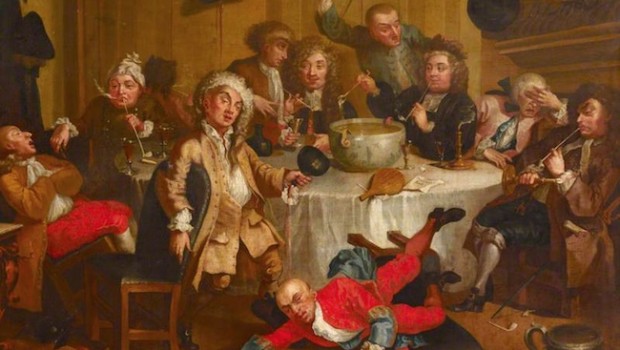 The First Bohemians: Life and Art in London’s Golden Age by Vic Gatrell

In the teeming, disordered, and sexually charged square half-mile centred on London’s Covent Garden something extraordinary evolved in the 18th century. It was the world’s first creative ‘Bohemia’. The nation’s most significant artists, actors, poets, novelists, and dramatists lived here. From Soho and Leicester Square across Covent Garden’s Piazza to Drury Lane, and down from Long Acre to the Strand, they rubbed shoulders with rakes, prostitutes, market people, craftsmen, and shopkeepers. It was an often brutal world full of criminality, poverty and feuds, but also of high spirits, and was as culturally creative as any other in history. Virtually everything that we associate with Georgian culture was produced here.

Vic Gatrell’s spectacular new book recreates this time and place by drawing on a vast range of sources, showing the deepening fascination with ‘real life’ that resulted in the work of artists like Hogarth, Blake, and Rowlandson, or in great literary works like The Beggar’s Opera and Moll Flanders. The First Bohemians is illustrated by over two hundred extraordinary pictures, many rarely seen, for Gatrell celebrates above all one of the most fertile eras in Britain’s artistic history. He writes about Joshua Reynolds and J. M. W. Turner as well as the forgotten figures who contributed to what was a true golden age: the men and women who briefly dazzled their contemporaries before being destroyed – or made – by this magical but also ferocious world.

“… if Gatrell takes a rosier view of Covent Garden than some might, that is a small blemish. The First Bohemians is a gorgeously engrossing book, bracingly sceptical of received pieties, and it combines scholarship with originality, colour and imagination to a rare degree.”

“Gatrell proves a dab hand at recreating the blazing furnace of 18th century Covent Garden, and I’m in full sympathy  with his unabashed promotion of the work of Thomas Rowlandson, whom he describes as ‘the greatest comic artist Britain has produced’ (though, to my mind, the late Ronald Searle could give him a run for his money). But the first half of the book, which deals with the social conditions, seems much tighter and more purposeful than the second half, when he deals with the artists. For some reason, it becomes bitty and runs out of steam.”

“Gatrell’s scholarly career has been a sustained attempt to recapture Georgian London from Victorian prudery. If this latest study is less than the sum of its parts when it comes to a definitive account of “the first bohemians,” in its sweep of visual arts, social history, literary criticism and bawdy culture it provides a superb chronicle of a golden age of authentic, urban creativity.”

“Like many of the men he describes (there are no women here), Gatrell is terrific company. He praises 18th-century writing for propelling us “niftily to the point” and his own his prose performs the same trick. Not one to pile up his sentences, he keeps his observations simple, his opinions straightforward and his narrative no-nonsense.”

“He loves the low, and always prefers it to the high … occasionally it lapses into inverted snobbery  … Gatrell isn’t much interested in explaining what caused the extraordinary efflorescence of creativity he surveys, nor even in considering the precise relationship between artistic “realism” and reality. Though he provides some brief, sharp remarks on such deeper questions, the book is mainly a celebration: a relaxed, confident and triumphantly successful re-creation of a fascinating world of male companionship, drunkenness, poverty, sex and art.”

“[Its] richness of detail makes The First Bohemians a pleasure to read. Occasionally Mr Gatrell gets carried away, particularly when breathlessly describing the bohemian excess of London’s inhabitants: “Apart from vegetables, flowers and fruit, the most intense of [Covent Garden’s] miasmas was the sex that well-attuned nostrils might breathe in its very air.” But with over 200 images reproduced in his book, many of which have rarely been seen before, his enthusiasm feels infectious.”

“Marvellous … The First Bohemians is an exhilarating, richly illustrated and witty alternative guide to an era that is too often regarded as decorum-filled.”

“Gatrell brings art and literature together, as Hogarth did in his print The Distressed Poet, and offers a history of ‘bohemians’ largely structured by available pictures. The result is stimulating, provocative and partial; there is much that will be familiar to 18th-century specialists, and much that is left out … The First Bohemians covers a good deal of the ground Gatrell travelled in his wonderful, prize-winning City of Laughter – even to the extent of reprising some of the material.”

“Richly documented (and wonderfully illustrated) … In the end, talk of Bohemianism seems rather to miss the point. These artists were not trying to scandalise the bourgeoisie; as Gatrell says, 18th-century society was so un-prudish that that was hardly possible. The big story is, instead, about how an unconventional way of looking at the world – vivid, unpretentious and often richly comic – became the basis of a new set of conventions.”

“Gatrell calls this churning social mash-tun the ‘First Bohemia’. The term jars horribly … I wonder if the ‘Bohemia’ label is there to conceal an underlying lack of purpose. It’s a chaotic book, which may be appropriate to the period, but feels like a missed opportunity. If this is an account of 18th-century Covent Garden, it is fatally undermined by the exclusion of writers and thinkers … Harlots get a whole chapter, by contrast. Admittedly, they are luridly interesting, but the balance is odd, and the treatment hackneyed … Gatrell is good on coffee, however.”

The First Bohemians: Life and Art in London’s Golden Age by Vic Gatrell The Omnivore