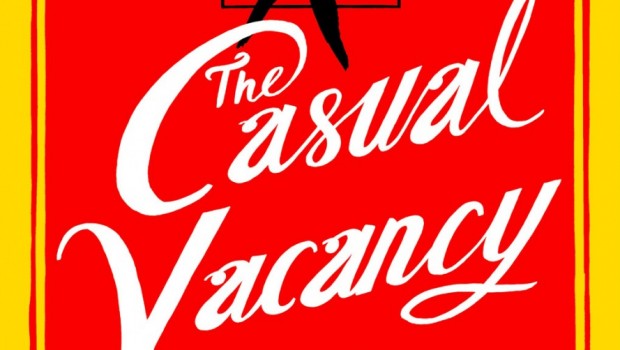 The Casual Vacancy by JK Rowling

Blurb: When Barry Fairbrother dies in his early forties, the town of Pagford is left in shock. Pagford is, seemingly, an English idyll, with a cobbled market square and an ancient abbey, but what lies behind the pretty facade is a town at war. Rich at war with poor, teenagers at war with their parents, wives at war with their husbands, teachers at war with their pupils… Pagford is not what it first seems. And the empty seat left by Barry on the parish council soon becomes the catalyst for the biggest war the town has yet seen. Who will triumph in an election fraught with passion, duplicity and unexpected revelations? (Little, Brown)

“This is a wonderful novel. JK Rowling’s skills as a storyteller are on a par with RL Stevenson, Conan Doyle and PD James. Here, they are combined with her ability to create memorable and moving characters to produce a state-of-England novel driven by tenderness and fury.”

“Rowling is, unsurprisingly, particularly good when she writes about teenagers … It’s gripping, but Rowling has too much material … The book would benefit from pruning: sometimes the characters’ back stories, for instance, run on in parentheses lasting for two pages.”

“The Casual Vacancy is no masterpiece, but it’s not bad at all: intelligent, workmanlike, and often funny. I could imagine it doing well without any association to the Rowling brand, perhaps creeping into the Richard and Judy Book Club, or being made into a three-part TV serial. The fanbase may find it a bit sour, as it lacks the Harry Potter books’ warmth and charm; all the characters are fairly horrible or suicidally miserable or dead. But the worst you could say about it, really, is that it doesn’t deserve the media frenzy surrounding it. And who nowadays thinks that merit and publicity have anything do with each other?”

“it ’s really not bad at all – immensely readable, often amusing and generally on the side of the angels … The ending of The Casual Vacancy is uncomfortably melodramatic; it ’s a book best enjoyed as a very respectable and entertaining piece of Young Adult fiction. ”

“The generation of twentysomethings of today have grown up with Harry Potter. It would be impossible for them not to look for parallels between the two or hope that, somehow, Harry Potter is hiding somewhere in the plot. He’s not — this is a marked departure from Rowling’s children’s books, but that isn’t a bad thing. Her work may always, unfairly, be judged by her first success.”

“The early parts of the book, though, offer something a lot less than a thick social web, a fairly basic set of strands that requires quite a few laborious circuits from the author and her busy spinneret to produce true narrative stickiness. There’s an odd refusal of specifics, too, in terms of year, season and location. ”

“Rowling’s writing, which can be long-winded and laborious in the clunkily satirical set-pieces, picks up passion, verve and even magic with Krystal and the other adolescents. Indeed, the teens of Winterdown belong in a bolder, richer book than some of the parental caricatures. All the social and hormonal turbulence that the later Potter volumes had to veil in the euphemisms of fantasy appear in plain sight here. Slowed down by its fussy class geography and wheezing plot-motor, the novel builds into a vividly melodramatic climax with these kids at its heart. And after the convulsion comes a sentimental coda that, in tone and setting, whisks us right back to Hogwarts.”

“The difficulty, in this fat novel, is the difference between the reader’s level of interest in a wholly invented world, such as Harry Potter’s, and the world we’re stuck with. We are introduced to a gaggle of characters constructed to fulfil the author’s purposes … It’s clear that Rowling is as concerned by a world in which the poor are left to fend for themselves as was Dickens, and is as keen to do what she can. Perhaps it’s no bad thing to be reminded that novels might, once again, do more than simply entertain us.”

“The question is, can The Casual Vacancy ever live up to the hype? On balance, I would have to say no. Not unless you want to have more than 500 pages of relentless socialist manifesto masquerading as literature crammed down your throat.”

“The Harry Potter books valued community and joint responsibility; here, Rowling has removed the idea from secret societies of wizards and tried to examine it in a contemporary, realistic context. I admire her commitment to continue as a novelist, and to attempt something as ambitious as an account of rural life. If only it had rested on a more solid ground of observation and considered, polished prose, The Casual Vacancy might have lived up to its fine purpose.”

“What the book has in common with Harry Potter is the ability to marshall an extraordinary number of characters into a coherent narrative, and a prose style so clunkily over-descriptive and repetitiously structured that it presents quite a barrier to the reader with any interest in language … The problem for Rowling’s legions of fans will be that she has forgotten to include any basic likeability in her characters here or any real suspense … The book is quite punishing to read and the view of human nature it takes is more fundamentally lowering than that of the most cynical French aphorist.”

“Rowling has said The Casual Vacancy is her attempt to write a modern version of a 19th-century novel. But it’s the weaknesses those novels could lapse into — sentimentality, melodrama, moralising — that she most replicates. Her book’s concluding avalanche of calamities and corpses would cause even Thomas Hardy to blink … Devoid of originality and grip, The Casual Vacancy is a sad exchange for the colourful inventiveness and spellbinding flair of the Harry Potter novels.”