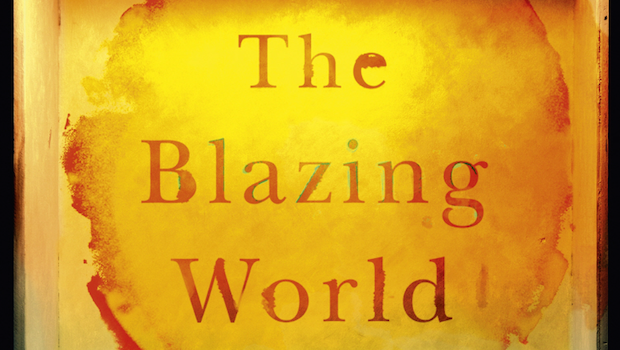 The Blazing World by Siri Hustvedt

Blurb: Artist Harriet Burden, consumed by fury at the lack of recognition she has received from the New York art establishment, embarks on an experiment: she hides her identity behind three male fronts who exhibit her work as their own. And yet, even after she has unmasked herself, there are those who refuse to believe she is the woman behind the men. Presented as a collection of texts compiled by a scholar years after Burden’s death, the story unfolds through extracts from her notebooks, reviews and articles, as well as testimonies from her children, her lover, a dear friend, and others more distantly connected to her. Each account is different, however, and the mysteries multiply. One thing is clear: Burden’s involvement with the last of her ‘masks’ turned into a dangerous psychological game that ended with the man’s bizarre death. (Sceptre, March 2014)

“Densely brilliant, but terrifyingly clever too, the text is laden with references to neurological research and phenomenological philosophy. Hustvedt does not wear her learning lightly. It’s easy to fret that, in a novel about artistic trickery, there are additional layers of authorial trickery to chase down (one source cited is “an obscure novelist and essayist, Siri Hustvedt.” Ho, ho.) But you don’t need a PhD in Kierkegaard to enjoy Hustvedt’s writing, and it’s a pleasure to feel your brain whirring as it forges links and finds the cracks across differing accounts.”

“There’s a central mystery to unravel in The Blazing World, but its real pleasures come from Hustvedt’s startling talent for voice and register. It’s a struggle of competing voices, setting Burden’s furious, hilarious, inspired scribblings beside the testimony of her friends and family but also against a chorus of naysayers, footnoters, hobby-horsemen and bores.”

“In essence, The Burning World is a fairy story, with all the riddles, cruelties and psychological ambiguities of the genre translated to the art world of 21st-century New York (a place populated with monsters, masks and extravagant fantasies of all kinds). Her critique of the milieu is richly entertaining, with a deft touch of intellectual flattery. Like Harriet’s collaborator, Rune, who “made people around him feel hip”, Hustvedt’s novel makes you feel cleverer for having read it.”

“It is, finally, also a novel that records the processes of intellectual inquiry. Harriet is always seeking out ideas, ordering her knowledge, cataloguing it in her notebooks with elaborate footnotes. Cultural history, philosophy, literature and visual arts are heavily referenced, and herein lies the book’s only weakness – that wearing sense that Hustvedt is asserting her cleverness with the learned footnotes and references to Husserl or Schelling. This element distracts from the book’s immense soulfulness and wisdom, though thankfully never for long.”

“The modest, kindly men of Hustvedt’s narrative are just as trapped in guises, defamed by the phoney inattentive establishment. Siri Hustvedt tumbles into ambiguities and yet her prose is brilliant, furious, teeming with intelligence and life – an experiment in reception itself.”

“This novel is like a palimpsest, built from many paper-tissue thin layers, some more transparent than others, and told through many voices, put together so cleverly it is not clear where the lines are between fact and fiction, let alone between the fictions within the fiction … This novel is a puzzle, a mystery, a dance, filled with intrigue, a truly wonderful intellectual work that makes you think and laugh and tickles the brain.”

“As in so much of Hustvedt’s fiction this makes for an interesting mix of hot and cold. The fury is brilliantly done, and so is the love affair Harry embarks on with a fat failed poet. Hustvedt writes with a cool precision that can give her work a blistering power. It is lucky for her that most of the voices that make up the “text” are, or aspire to be, writers, too. Some of them aren’t. “Sweet Autumn”, an assistant to one of her male “masks”, writes way too poetically for a new-age fruitcake. Mostly, this doesn’t matter. The Blazing World is a dazzling novel, the kind that makes you cry (or nearly cry) as well as think. The trouble is, it is too long.”

“Among the “documents” that make up the text are Harriet’s own diaries, which supply a more conventional narrative stream through which the story can essentially be told; but while they undoubtedly make The Blazing World more accessible, to an extent they blunt the novel’s edge by confusing a visual politics with a verbal one. The authority of woman in language – her ability both to articulate herself and to make herself intelligible – is worlds away from her dispossession in art, the radicalism of her gaze, her struggle with the complicity of her own image as painterly subject and muse.”

“The Blazing World sets out as it means to go on: without much care for the reader’s capacity to engage. As a whole, the novel takes the shape of a book by IV Hess, a professor of aesthetics who decided to write about Harriet’s work shortly after her death. This conceit sees Hustvedt opening the novel with a desiccated scholarly introduction and then following it with a series of excerpts from Harriet’s notebooks, interspersed with the “written statements”, interviews, transcripts, and less anchored communications of people in Harriet’s circle. It’s a difficult form – one that doesn’t generate the warmth and coherence of Hustvedt’s best-known book, What I Loved.“

“Despite its impressive intellectual heft, Hustvedt has turned a conceptually playful novel into something that feels dry and laboured.”

The Blazing World by Siri Hustvedt The Omnivore