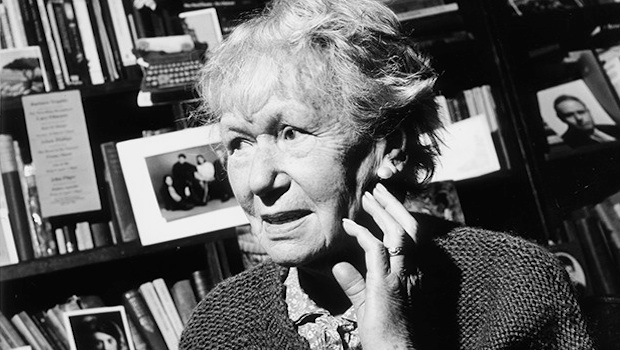 Blurb: Penelope Fitzgerald (1916-2000) was a great English writer, who would never have described herself in such grand terms. Her novels were short, spare masterpieces, self-concealing, oblique and subtle. She won the Booker Prize for her novel Offshore in 1979, and her last work, The Blue Flower, was acclaimed as a work of genius. The early novels drew on her own experiences – a boat on the Thames in the 1960s; the BBC in war time; a failing bookshop in Suffolk; an eccentric stage-school. The later ones opened out to encompass historical worlds which, magically, she seemed to possess entirely: Russia before the Revolution; post-war Italy; Germany in the time of the Romantic writer Novalis.

Fitzgerald’s life is as various and as cryptic as her fiction. It spans most of the twentieth century, and moves from a Bishop’s Palace to a sinking barge, from a demanding intellectual family to hardship and poverty, from a life of teaching and obscurity to a blaze of renown. She was first published at sixty and became famous at eighty. This is a story of lateness, patience and persistence: a private form of heroism.

Loved and admired, and increasingly recognised as one of the outstanding novelists of her time, she remains, also, mysterious and intriguing. She liked to mislead people with a good imitation of an absent-minded old lady, but under that scatty front were a steel-sharp brain and an imagination of wonderful reach. This brilliant account – by a biographer whom Fitzgerald herself admired – pursues her life, her writing, and her secret self, with fascinated interest.

“Lee was a perfect choice as Fitzgerald’s biographer. She has done a superb job, capturing an elusive personality and a complex, sometimes rather harrowing story. ”

“Fitzgerald did not begin writing until nearly 60, so part of this book is inevitably the story of domesticity gone awry. The bonus is brilliant social history, and more: Lee catches not only the tempo of each decade, but how values from Fitzgerald’s past constantly inform her present.”

“At the end of the book, Lee, whose previous subjects include  Virginia Woolf, Edith Wharton and Elizabeth Bowen, worries that she’s been working in the face of Fitzgerald’s “reticence, evasiveness and secrecy”, and hopes her subject “might not have disapproved of me.” She shouldn’t worry. Her intense, close-up analyses of each book would have thrilled Fitzgerald, while her passionate feminist sympathy for the intellectual bombshell turned bag lady reads very much like (Penelope’s own phrase) “a squeeze of the hand” down the years.”

Emma Townshend, The Independent on Sunday

“This book will hold insights and treats for any admirer of her fiction, and recruit converts to this reticent, witty, ferocious champion of the utterly downtrodden. Fans who will hum in resonance with her quickness, her catching of people’s exact quirks, her concision. Yet just occasionally there are details that are so sad and awkward and painful that you almost wish you could un-read them. I felt both sorry and intrusive when reading that Fitzgerald slept for much of her adult life on a folding camp bed in her sitting room, carefully tidied up each morning. Lee’s book, I think, makes clear that the revelation of painful biographical details would have left this proud, private author cringing. The reader winds up concluding that though it might be a terrible experience to have a careless and inaccurate biographer, it might, for a certain kind of person, be even worse to be the subject of a really careful and accurate one.”

Penelope Fitzgerald: A Life by Hermione Lee The Omnivore